Things start of pretty fast in 'The Walking Dead: Hounded'.  Here's how it played out. 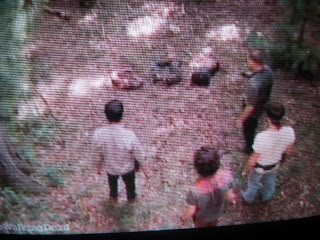 MERLE AND FRIENDS HUNT MICHONE
- Merle took a small team of killers with him to hunt down the exiled Michone.  They stumble across a warning from the Hanzo-sword wielding killer made up of dismembered zed body parrts.  One of the crew, an openly frightened Gargulio, deciphers the message as 'Go Back'.  Before they know it, Michone jumps the Woodbury crew and takes out two of the members.  Merle gets a shot off that wounds Michone, and the chase is on.

Only a few moments after looking for her, she jumps them again.  After a struggle, zeds join in the fun, giving Michone a chance to run.  But not before she cuts open the stomach of one of the ghouls while stuck on the ground, providing the viewer with some great Greg Nicotero special effects gore. 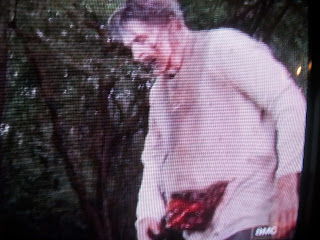 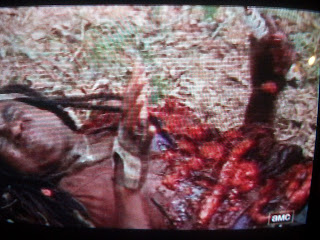 Merle calls it off, saying Michone is going into the 'red zone' and is as good as dead.  Gargulio speaks up and wants to make another run at finding and killing Michone, stepping up to Merle.  But Merle blasts the boy for speaking up and returns to Woodbury.

Trying to escape, Michone accidentally learns that the caked-on gore from the belly of the zed has disguised her to the walking dead.  So she moves on and into a nearby town.  Its here where she sees Glen and Maggie rolling in for supplies.  The problem is Merle arrives as well.  After setting up a false sense of security, Merle captures Glenn and Maggie and forces them to go drive Woodbury, leaving the baby food. 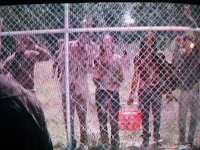 Andrea tells the governor she didn't like the ZombieBloodFights from the night before and wants to work wall.  So she's assigned with this young girl who has a compound bow.  But the girl sucks with the bow she claimed she killed her father for, so Andrea has to go all women's lib on the zombie the girl tried to kill by jumping off the wall, stabbing the zed in the head, and making the girl look stupid.  But the girl rats her out to the governor.

In the proverbial principals office, the governor takes her off the wall.  But to get back in to his good graces, she changes her position (no pun intended) for the governor on the ZombieBloodFights.

The Governor sees that she's opening up to him (no pun intended), so he takes her back to his super mini garden for a drink and conversation.  It's here that he gets all Jim Jones on her and charms her with words and whiskey and gets her in the sack.  That's when Merle returns and lies about the expedition but the capture of Maggie and Glenn.
MYSTERY AT THE PRISON 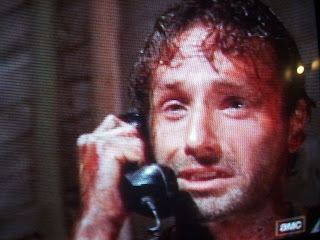 The mysterious phone call is answered by Rick.  The people on the other line claim to be survivors, but they hang up on him.

After checking with the team, Rick returns to the room and a dude calls him back, asks if he's killed anyone and how many, then asks about his wife because he mentioned a boy and a baby to the lady who called the first time.  When he doesn't answer, the dude hangs up on Rick.

Herschel shows up to help sooth Rick, and Rick tells Herschel about the phone call.  Herschel listens on the phone, then offers to stay with him.  Herschel suggests the phone isn't working, and gives Rick some space. 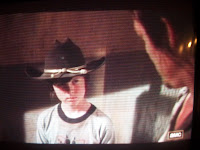 Another few phone calls later, he then starts talking to Lori, and you know he's gone off the deep end.  But the message she has for him is a kind of consolation that helps get his focus back.  He returns to the team to hold his baby for the first time.

Oscar, Daryl, and Carl do some cleaning up of some of the prison.  While doing their search, Daryl shows off some acting chops with a monologue about how his mom died in bed when he was young in a fire.  Daryl says how unreal it was to him.  But Carl comes back with his experience shooting his mother in the face and saying 'That was real.'  They both console each other for their loss. 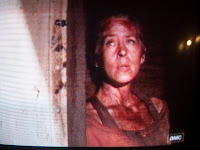 They had discovered a door that seemed to contain another zed.  They knew it couldn't be much of a threat if it couldn't open the door.  Later, when Carl and Oscar return to the team, Daryl moves to kill the zed after a moment of brooding.  It's then that he finds out it is Carol.

Meanwhile, Rick is having his moment outside with his baby, but notices something by the gates.  As he approaches, he finds Michone... with the baby food Glenn and Maggie left behind.

Just how will Michone be treated by the Walking Dead crew?  We'll see very soon.

You can network with Bowie and read about his Tex-Mexploitation stories at his personal website, ZombieBloodFights.com.
Posted by Bowie Ibarra at 6:49 PM