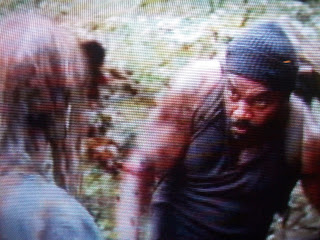 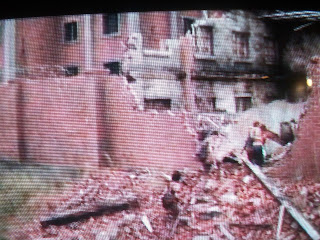 This weeks episode opens with the appearance of Tyrese, apparently another popular character from the comic, regulating zeds in the woods with his friends.  We are treated to an example of his football acumen as he runs through the woods with skill and athleticism with a big backpack to help his team.  Though one of their team is bit, they end up finding sanctuary in a broken down wall and its building.  Look familiar?

Axel gets creepy with Beth, but is cut off by Carol, who pulls him aside.  He's pretty plain about his motivations, having spent so much time behind bars without the company of a female.  He thinks Beth is his only option, stating he thought Carol was a lesbian because of her haircut.

Later, young Carl, with his dad's hat, keeps tabs on the group and his little sister.  They hear a scream from the interior.  There's a funny moment when Herschel says it can't be Carol because she's in the guard tower with Axel.  We all remember the fun Maggie and Glenn had in the guard tower from a while back.  I wonder how Daryl's going to feel about that.

At any rate, Carl goes to investigate and finds Tyrese and his friends.  He helps them fend off the zeds, who seem to have followed them in, and leads them back to a secure room.

Its there that one of their team passes from a bite suffered in the woods.  Before they can smash her face in with a hammer before she rises, Carl locks them in the space.  That's when one of the team named Sasha's voices that she's not much for being 'secured', but Tyrese sees the advantage and they relax about it.

Andrea volunteers to help scientist Mr. Mamet cremate Mr. Coleman.  As she leaves the governor's side, it gives the governor special time with Penny.  He plays music like Mr. Mamet's experiment, Penny runs at her dad, but is restrained by a leash.  He tries to calm her by undoing her bonds and singing to her.  Too bad she's interested in the blood pudding he made for her.  He shouts at her, losing patience, and puts her back in her cell.

Meanwhile, Maggie and Glenn are trying to come to terms from their respective forms of torture, and 'forget what people do'.  Glenn gets motivated and rips the arm off a zed in the room, taking its bones for use as weapons.

Meanwhile, outside, the WD Crew Fireteam of Michone, Rick, Oscar, and Daryl follow Michone's lead and begin their infiltration of Woodbury to find their friends.

The Governor and Merle are planning an assault on the prison.  Though Merle is concerned about his brother, the Gov feels they can get Daryl on his side.

The WD Crew move deeper into enemy territory, breaking into a building.  Rick thinks Michone might be leading them into a trap.  But they are spotted by some schmuck from the wall who walks in on them.  The dude doesn't think they are much of a threat.  But when Rick jumps the dude and asks where his friends are, its too late.

They end up finding out where the prisoners are when Maggie and Glenn make a move on enemies entering the room they were in.  They jump them and stab them with their bones, but its short lived because they had backup.

It gives enough time for the WD Crew to initiate an assault, freeing their friends and leading to a mad dash out of Woodbury.

The Governor tells the regular citizens not to worry and go home, but tells his militia to gear up. 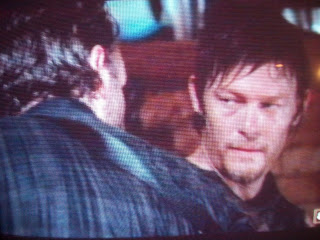 Michone leads the team to a safe building to make another run at the wall before she runs off.  Its here that Glenn tells the team about Merle and the Governors knowledge of the prison.  Daryl wants to see his brother, but Rick tells him he needs him with the WD Crew.  We once again see that Rick's relationship with Daryl is just like the Governor's to Merle.  It's another striking moment when you see the duality of the two teams, just like when Michone first joined the WD Crew at the prison.  It was like Woodbury without the trappings of normalcy.

The Governor mobilizes his team against the 'terrorists', and tries to keep Andrea out of the action, who again gets all women's libbed up and ready to fight back.  But the Governor can't let her see the enemy.

That's when the WD Crew makes their move.  The set off smoke bombs and race to the wall.  Andrea claims she sees them.  The Governor thinks she was able to see them because she was able to identify the prisoner, Oscar.  Not by name, actually, but by clothes.  But that could spoil his plan to assault the prison, so he demands she goes to hide.

While the WD Crew is running and gunning their way to their escape, the ghost of Shane comes to haunt Rick and even shoots Oscar dead.  Rick puts the Shane-Ghost down to find it was a real man that was not really Wolverine Shane. 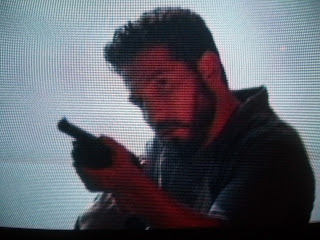 Rick clearly is still not well.

Michone infiltrates the Governor's house and waits at the door for her revenge.  But she hears Penny in the side room.  She kicks open the Governor's rec room to find the heads and Penny locked up.  She thinks Penny is just a kid and takes off her chain.  But then she takes off the bag on her head to find she's dead.  When she tries to bite her, Michone takes control to set up a fatal strike with her Hanzo.

But that's when the Governor shows up and begs her not to hurt her.  He even puts his gun away and submits to her, offering himself up to Michone to spare his 'little girl'.  Michone sees the best way to hurt the Governor by killing Penny, which she promptly does by stabbing her through the neck and out her mouth.

A fight ensues, as you might imagine, breaking the fish tanks with the heads and brinking their biting into to the equation.  That's when Michone uses some glass to go Lucio Fulci on the Governor and stab him in the eye. 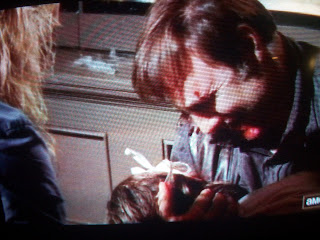 Its then that Andrea appears to see it all, and the two former BFF's have a face off.  Michone walks off because the Women's Libber can't pull the trigger.  The other problem is she is now exposed to the Governor's sick secrets in his rec room.

At the doctor's office, Andrea confronts the Governor about the heads.  But he doesn't have much to say.  When Merle arrives, he tells the governor he'll go after them.  But the governor is thinking about a different angle.

Rick mentions to Michone upon her return that Daryl moved back into Woodbury to find his brother.  But the problem is he gets caught and put in the arena of sport, the ZombieBloodFights.com Arena, where the Governor sets up a speech about how he's failed the city and sets up Merle to take the fall as a 'terrorist', saying he is responsible for letting the terrorists in for the attack.

Problem is, Daryl gets added into the mix, too, and all of Woodbury calls for their heads. 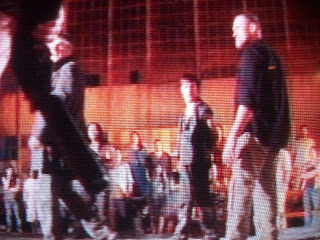 Anyway, enough of that.  We'll see you in February.

Bowie Ibarra is the author of the 'Down the Road' zombie horror series from Permuted Press and Simon and Schuester.  His latest zombie story, The Fall of Austin, tells the story of military, police, convicts, and citizens of the Texas capitol as they deal with the zpoc.  It is available in Kindle and Paperback.

You can network with Bowie and read about his Tex-Mexploitation stories and check out his book trailers at his personal website, ZombieBloodFights.com
Posted by Bowie Ibarra at 10:05 PM