ZOMBIES-Travis Adkins was right. The ultimate weapon for the ZPoc is a Hanzo Sword 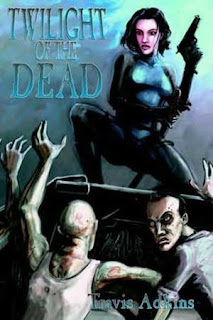 It’s a discussion that is rehashed and rehashed and rehashed some more since even before Ken Foree and Scott Reiniger busted into the old school gun shop in the Monroeville Mall.
(And, may I say, those were the good old days in America when you could buy your firearms at the shopping mall.  Not like today.  Perhaps the gun-grabbers in the ‘U.A-yes gummint’ want to take our guns so when they unleash the zombie apocalypse, we’ll be defenseless, begging for their help as they stick us in FEMA camps and inject us with mercury-laden vaccines that… wait, what was I saying.  Oh, yes….)
Since those four renegades made their temporary home in the Monroeville Mall, Romero disciples and lovers of zombie horror have had their dream weapons for the zombie apocalypse.  Naturally, firearms come to mind.  People pick machine guns, shotguns, lever action, the works.  Even explosives.  I, personally, would like a good ‘ol wooden bat.
But there are some simple facts that make these devastating choices BAD choices during the zombie apocalypse, at least when it comes to battling the undead.  There is clearly one true weapon that would be THE weapon to use, if you could find it.  A weapon so devastating, yet so simple, anyone prepping for the zombie apocalypse now would be a fool to ignore it and start training with it, simple training that could mean the difference between life and death.  Yes, my friends, I am talking about the Hattori Hanzo sword. 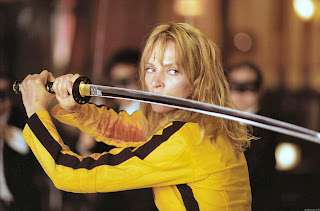 First, lets establish the context of this hypothesis.  This hypothesis is for the zombie apocalypse with ‘Romero Shamblers”.  ‘k?  k.

“But Bowie,” you say.  “You’re a dumb ass.”
Then I say, “Thank you,” and take a bow.
Then you say, “I said you’re a dumb ass.”
Then I say, “Oh.  I thought you said ‘awesome’.  Go f**k yourself, then.”
Then you say, “Bowie, tell me about the Hattori Hanzo sword.”
Well, the legend of the Hattori Hanzo sword starts with a true legend from Japan.  In short, Hanzo was a, “samurai and ninja”, and Hanzō,

“…was known as an expert tactician and a master of spear fighting. Various magical tricks such as disappearing and appearing elsewhere, psychokinesis and precognition were also attributed to him.”

You can read more about him here:

Or, at least, what the ‘internet’ has documented about him.  Because, in the immortal words of “The Heartbreak Kid” Shawn Michaels, “if its on the internet, then it must be true.”
I first heard of Hanzo in the classic SNK video game, “Samurai Showdown”.  He was the ninja character, and he leads a band of ninjas that, “…specializes in assassination attacks against their enemies”.  Imagine that.

Here’s the video game characters history where you can read more:

Oh, and here’s a tribute video if words aren’t enough for you.  C’mon, gamers, you already know you’re clicking it:

The legend of Hattori Hanzo made its way to the silver screen with the release of Tarantino’s “Kill Bill” series.  In it, the protagonist named “The Bride” travels to Okinawa to have a Hattori Hanzo sword custom made for her so she can make a run to kill her former team of assassins who tried to kill her.  If you haven’t seen the two-part movie, go ahead and NetFlix it now.
Here’s a video from the flick, with the Hanzo-style sword presented to her in a special ritual.

“C’mon, Bowie,” you say. “A sword does not top a firearm in regards to zombie-killing power.”
“For sure,” I say.  You’re a sh**head, I think to myself.
But let me tell you two good reasons why a sword would be superior over a firearm.

With training, using a Hattori Hanzo sword when the dead rise from the grave and attack the living would be the best course of action.  Why?  Simple.

Buy a whetstone, learn how to use that to keep it sharp, and you’ll be set.

Wooden bats break.  Bats, in general, take some work and effort.  Regional weapons, like Cricket Bats, can also break, and take effort to down the zombie.  Machetes get stuck in zombie’s heads.  Just ask Tom Savini and Lenny Lies.  Those precious seconds could cost you your life.

So get a Hanzo sword and train.  Train now.  And find a legit Hanzo-style sword.  No, not the swords you find at the ‘Pulga’ off of Eisenhaur Rd. in San Antonio, Texas, for $20.  Find an honest to goodness Hanzo sword.  Then learn how to use it.
Then run.  Run laps.  Or, in the very least, get on the ellipse machine.  Get your wind up.
Think I’m kidding about the effectiveness of the Hanzo.  Consider this video evidence.  Yeah, it’s an exhibition, but imagine this kind of skill against the shamblers.

Exhibition of The Hanzo Sword:  Bride vs. Crazy 88

The number one theory in ‘Zombieland’ stands true.  Conditioning is key.  Then, make a plan.  Then, train in the Hanzo sword.