ZOMBIES - "Like a Sucker Punch from a pregnant lesbian"

"Oh, S**t," you say?  "Bowie did a blog that does not have anything to do with pro-wrestling?" you say?   "He did not take the time to take pictures, write up his experience to an ungrateful audience, or anything like that?"
And I say to you, "No.  (But I will again in March)"  Then I say it again.
"No.  (But I will again in March)"
Then I say, "Listen, don't judge me.  I had a long work day.  I can tie one on if I want."
Then you say, "What's your point, rummy?"
Then I say, "You need to read the following passage from the zombie novel "Drop Dead Gorgeous" by Irishman Wayne Simmons, available now from http://www.bookdepository.com/.  If you like great character development, great story, and a fantastic finish where (no spoilers), then you need to check this book out.  Oh, did I mention one of the main protagonists is a tattoo artist?  And there's a lot of drinking?
Yes, that's the angle this book comes at you from.
From Ireland.
You think the fighting the Protestants and Catholics and the IRA is ridiculous.  Add zombies to the mix, then watch what happens.
You've come this far.  Take a minute and read the following passage from the book that people have called, "...Like a sucker punch from a pregnant Lesbian", or "...not the typical same-ol zombie fare".  Or, perhaps the best, "... Simmons writes like the grotesque love child of George A. Romero and Charles Dickens".
Seriously, check it out... 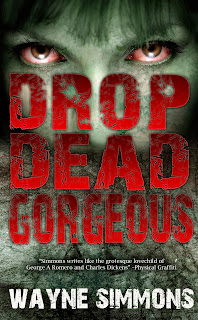 No, seriously.  Go buy it.  You will not be disappointed.www.waynesimmons.org


Wayne Simmons
Sci-Fi and Horror Author
Posted by Bowie Ibarra at 1:04 AM