7B.  THE SPRINGTIME OF LOVE

“Oh, my God.  Whose idea was this?” chuckled Shirley.
“This idea was yours, young lady,” said Burt, also running out of breath.  “All yours.”
“It wasn’t my idea,” she said, smiling.
“Don’t throw this misadventure on me, kitten.  No, no, no,” he replied.
They were only a few yards from the large, white, and iconic ‘Hollywood’ sign, having climbed up the hill for the past few minutes.
“Are we going to get in trouble?” asked Burt.
“Maybe,” said Shirley, taking a seat on a patch of ground.  Burt joined her.
“The last thing I ever thought I’d be doing after work on a Tuesday night is sitting under the Hollywoood sign, drunk, carrying a .45 Colt.”
“My .45 Colt,” said Shirley.  “And me, the same, with a bottle of Jim.” 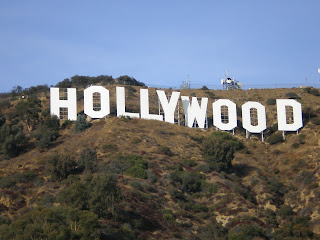 “My bottle of Jim,” said Burt.  They chuckled, looking over the sprawling L.A. county.  The lights of the city burned with energy like a Pentium processor chip in a super computer, sizzling with life.
The L.A. night buzzed below them as they sat on the quiet hillside.  The sweet wind of the California night gently cooled them down.
“What is it about life that makes it such a roller coaster?” asked Shirley, taking out a pack of Marlboro Lights.  She removed a cigarette for herself.  She offered Burt one.  He waved her off.
“Who knows?” he said.  “God, maybe.”  Burt spun the cap off the bottle of Jim Beam and took a swig.  He passed it to Shirley, who took a swig herself.
“You know, if it wasn’t such a roller coaster, who’d want to live it?”
“Some people don’t make it,” she replied.  There was an awkward silence as they both reflected on Greg.
“The end of the world comes quick for some, huh?” said Shirley, breaking the silence.
Burt tried to change the subject.  “What is the end of the world?” he asked.  “Sure, individual death.  But what about the world?  The end times?  What is it?”
“Plague,” thought Shirley.  “War.  Anything.  I see the world ending by some kind of plague.”  She gazed off into the distance, as if hypnotized by the thought and the sparkling LA night.  “Everyone just dying.  The world leaders finally coming together, but its too late.  Everyone just dies.”
Burt took a moment, then blurted out, “Did I ever tell you I wanted to have a gun shop of my own?”
“Are you serious?” said Shirley.
“Absolutely dead serious.  Just like the place I’m working at now, but named ‘The Armory’.”
“That’s such a dumb name.”
“What?” asked Burt.  “The Armory is not a dumb name.”
“You need to call it something cool.  Something gun lovers will enjoy saying or telling their friends about.”
“Okay, Miss Business Smarty-Pants.  What should the name be?”
“Locked and Loaded,” she replied with confindence.
“Locked and Loaded?” whispered Burt.  “Locked and Loaded.”
“Locked and Loaded,” said Shirley, nodding.
“You know what?” said Burt.  “I like it.  Locked and Loaded it is.”
“See, I told you there were better names.”
Burt looked at her quizzically.  “How did you come up with that name?”
“Because I’ve always wanted a gun shop of my own, too,” she said.  “That’s the name I would call it if I had one.”
“Really?”
“Really.”
The two shared a smile, then looked back out across the sizzling city lightscape.
Silence.  All that danced between them was the gentle breeze of the night.
“You know,” said Shirley, breaking the silence yet again.  “You didn’t have to throw the competition.”
Burt blushed.  “I didn’t throw the … are you saying I took a fall?”
“You didn’t have to take a fall for me.”
Burt explained.  “I made a shot.  A good shot.”
“One you knew I could beat,” she said.  “You didn’t have to take the fall.”
Burt turned and looked Shirley in the eye.  “I didn’t have to fall for you, either.  But I did.”
Shirley blushed.  A moment shocked them with heat.  Part alcohol.  Part fire that had been burning in their hearts since that first day they met at the gun shop.
Breaking the tension and the gaze, Shirley looked over at a cactus in the distance.  “One shot.  That cactus flower.  Winner take all.”
Shirley pulled out her pistol.  She took aim.
She fired.
She missed.
Burt smiled.  He pulled out his piece.  He took aim.
He fired.
The flower was summarily removed.
Turning to Shirley, Burt said, “You didn’t have to take the fall.”
“I didn’t have to fall for you, either,” she said, leaning into Burt.  “But I did.”
And with that, Burt leaned in.  He might not have had the company of a woman for many years.  But he was man enough to know when a woman wanted knowledge of him.  And he was man enough to satisfy the request.


Their lips met for the first time under the lascivious gaze of the white hot letters of Hollywood.

For the full scoop on the story, join the official ZBFbooks.com Facebook group HERE.
Posted by Bowie Ibarra at 1:24 PM