So check this out, friends and readers.

ACKNOWLEDGEMENTS
For Vanessa, for hooking it up with coffee at Whataburger

For my late father, who was a proud United States Marine.  And to every military member of my family, past and present.

For all my friends in the military, especially SFC Edgar Martin Arnall, Army.  Thanks for keeping me in the game.

For Mr. Bailey who shared his experiences in Vietnam when I was in 8th grade history class.

To my fellow writers who were in the military: Craig DiLouie, JL Bourne.  Thank you for your authentic military voices in your zpoc writings.

For every soldier who puts it all on the line for the US of A.

And for every member of the United States Marine Corps.

And for Bo Woodman.  Thanks for showing me the story of Max.

CHAPTER 0 - TAKING IT BACK

“Get the hell out of my gunshop, you bastards!”
The stout old man opened fire with precision just over the heads of the looters, quickly making them scatter like pigeons startled in a downtown park, or in front of the LA courthouse.  Two of them opened fire with pistols as they ran, making the stout old man dive behind a wooden case that was now lined with broken glass where pistols used to lie in quiet solitude.  Tools waiting to be used.
One man was using his tool.  He knew how to use the tool well.  But this was all too much for him.  It was a massive mistake to arrive at his gunshop in the middle of some kind of bizarre riot fueled by a colossal case of mass hysteria and cannibalism.  The gun shop was a natural target for the scared, the criminal, the desperate.  What did he expect?  After being forced to use his M-16 to scatter the looters from what was left of his gun shop, he felt like all three:  scared, criminal, desperate.
It was something he had to do.  It was his shop.  It was also her shop.  It was their shop.  And since it was part hers, he had to defend it.
“You just fucked up, old man,” shouted a voice from within the smokey confines of his shop.
The old man was amazed at how fast his world in Montebello, California, just outside of downtown Los Angles, fell apart.  The city was always tense, always on the verge of chaos.  It was a powder keg of racial tension, economic desperation, and illiteracy waiting for a spark.  Today, the spark arrived, lit like a fuse on a Black Cat firecracker on the Fourth of July, exploding just as fast.
“Just walk away,” said the old man with an exhausted smile.
He was quoting his favorite movie.  He never thought he’d see the day he would actually use the line.
“I’ll spare your life.  Just walk away.”
“Fuck you, old man,” shouted the thug. 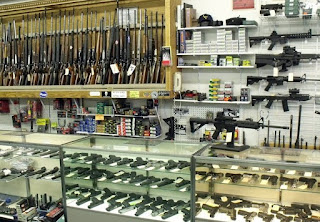 The old man could hear the crunching of glass under his adversary’s feet, signaling to him that his enemy was making a move.
He listened closely to the direction he estimated the sound was coming from.  With all the racket of the falling city buzzing in his ear, he could not get a bead on his enemy.  It didn’t help that he was too tired to concentrate.  He had a condition.  He was prepared for this run emotionally.  But he wasn’t prepared for this run physically.  He knew better.  But he did anyway.
I’ll be goddamned, the old man thought to himself.  He only had a few moves.  A few moments.  He would have to act first, be proactive in this game of death he put himself in.  He felt like a pawn in a massive chessboard with a deathly queen bearing down on him.  It was a game he had to play.  A game he had to finish.  No one was going to take ‘Locked and Loaded’ without a fight.  He would not be punked out in his own gun store, his territory.  The bastard knew that.  His enemy was street smart enough to understand the significance of territory, of unwritten boundaries crossed at street signs.  Of territorial sidewalks run by gangs changing hands with a mere step.
And this little kid, this young punk thought he could get away with it?  The old man might have made a bad choice stepping out into a new world transformed by frightened and confused pandemonium.  But the young punk made an even worse move by stepping up to a man that had combat skill.  Maybe not the greatest combat skills, but the skills of a man who was no stranger to gunfire, no stranger to death.  And that old man had been forced to take a life before.  And though he spent the past few moments running through the neighborhood using a Herculean amount of restraint among the madness of the city, he would do it again if he had to.
And damned if his name wasn’t Burt Scott would he let some young punk used to bullying people with a firearm take what was rightfully his.


What was rightfully hers.

For the full scoop on the story, join the official ZBFbooks.com Facebook group HERE.