“Every day, once a day, give yourself a present. Don't plan it, don't wait for it, just...let it happen. Could be a new shirt at the men's store, a catnap in your office chair, or two cups of good, hot, black coffee.”
~ Special Agent Dale Cooper 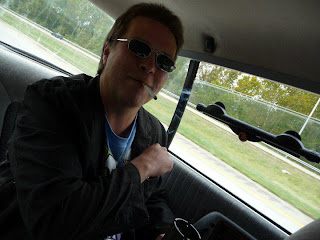 Vital Stats:  40 years old, six foot one, hailing from Parkersburg, WV
Full Name:  William Todd Rose
Nickname: That Weird Guy
Primary Specialty:  Writing
Secondary Specialty:  Graphic Design
ZombieBloodFights: It’s great to have you here on the blog, William.  Welcome.
William Todd Rose:  Thanks for having me, Bowie.  It’s great to be here!
ZBF:  I want to start by asking you a question you started with me a few months back on your blog, Seven Demon Bag, which you can interpret and answer however you please:  if you were in possession of a 6 Demon Bag, what would yours contain?
WTR:  Oh, how the tables have turned….  In my Six Demon Bag, I’d have a bottomless cup of coffee, an Acme Instant Hole to get me out of tight situations, cigarettes you could smoke with no ill health effects whatsoever, a wormhole that would allow me to travel to any place or time I chose, and a golem to do my bidding.
ZBF:  Clive Cussler likes to take pictures with all his great vehicles.  If you had a chance to pick any vehicle you like, which two would they be to put on the dust jacket of your next book? 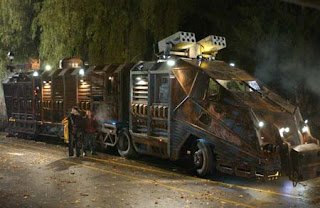 WTR:  Say what you will about the movie, but I think it would be pretty awesome to have my picture taken with Dead Reckoning from Land of the Dead.  My other choice would be whatever it was that crashed at Roswell.
ZBF:  When did you become interested in writing stories?
WTR:  I was pretty young.  It was definitely during my elementary school years, but a little quirk in the way my mind works makes it hard for me to assign specific time frames to most of my personal history.
ZBF:  What is your process when putting together a story?
WTR:  For the most part, I generally just go with the flow.  I’ll have this character who starts talking to my imagination.  At first it will be just little snippets of dialogue with no real frame of reference.  Sooner or later the details will start to fill in and I’ll get an idea of the world this person lives in.  From there it just continues to flesh out and grow organically.  The majority of times when one of my characters gets into a really messed situation, I have no idea how they’re going to get out of it until it happens.  It’s kind of like watching a movie play out in words across my screen.  There have been times, however, when I’ve had entire books pop into my head, usually when I’m trying to get to sleep and can’t.  In those situations, I’ll actually sit down and outline the novel. 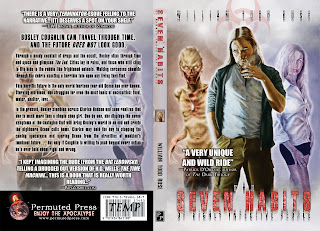 ZBF:  Tell us a little bit about your book with Permuted Press, The Seven Habits of Highly Infective People.
WTR:  The ridiculously simplified synopsis is that it’s a novel about drugs, contagion, time travel, and the living dead.
To expand on this, through experimentation with the occult and various mind-altering substances, the protagonist, Bosley Coughlin, has become dimensionally unstable, which allows him to spontaneously travel through time.  When this happens, he shares the consciousness of a host, experiencing life through their senses.  One of these hosts is a fourteen year-old girl named Ocean who lives in a post-apocalyptic future where the dead hunt the remnants of humanity and food wars have made supplies a rare and precious commodity.  Bosley forms an emotional connection with this starving young girl, which remains even once he’s returned to his own time.
In his own present, Coughlin inadvertently meets a shop clerk named Clarice Hudson and starts to realize that she seems to be displaying the seven symptoms of the infection that will usher in the end of civilization and the beginning of Ocean’s reality. There’s a chance that Bosley may be able to alter the course of history, saving Ocean from the horror of her nightmare world; but to do so will mean he has to push aside every belief he’s ever had about right and wrong and trudge through gray areas of moral ambiguity.
ZBF:  You’ve written several other books as well.  Tell us about some of your favorites. 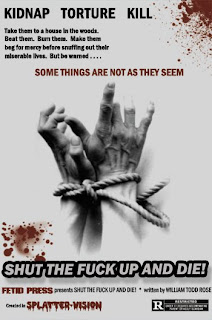 WTR:  Shut the Fuck Up and Die! is one I’m particularly proud of.  It’s kind of my homage to the grindhouse and splatter films I grew up on, taking some of those familiar elements and adding my own spin.
The Dead and Dying is another personal favorite.  This is another zombie novel which starts off with the main character slowly dying from a bite in a woodland shack.  Though he doesn’t realize it, two spirits watch over his final hours with him:  Josie, a woman with whom he’d found love in a harsh and uncaring world, and a young boy whose spiritual form is as deteriorated as the undead.  The boy harbors an intense hatred for Carl and these three characters form the trio of narrators who stories gradually intertwine.
ZBF:  When you have time to read, who are some of your favorite authors, and some of your favorite books?
WTR:   Neuromancer by William Gibson is one of my all-time favorites.  I can’t tell you how many times I’ve read that book, but I’m on my third copy now.  I also really dig Jack Kerouac and William S Burroughs, David Moody, and Chuck Palahniuk.  Some people may find it a little odd, but another of my favorite books is a collection of short stories by Amy Bloom entitled Come to Me.  Oh, and The Coming Plague: Newly Emerging Diseases in a World Out of Balance by Laurie Garrett.  The book has probably had more influence on my writing than any other title.
ZBF:  What do you look for in a good zombie horror story? 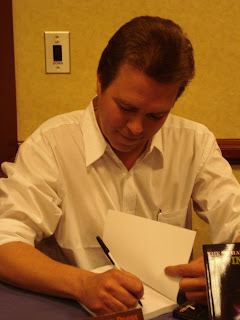 WTR:  I look for believable characters.  They don’t necessarily have to be likable, in my opinion, but I do expect them to speak and behave realistically.  I also like it when authors do something a little different with the genre.  David Dunwoody’s Empire is a good example of that
ZBF:  Everybody has their own idea on what would be the best weapon for the apocalypse.  What would be some of your picks for firearms and melee weapons?
WTR:  Probably a thirty-ought-six because it’s one of the few high powered firearms I actually know how to use and am a decent shot with.  An actual katana would be cool if you could manage to find one that wasn’t a cheap knock off.  Barring that, I’d want something that was specifically designed to cut through bone.  A cleaver maybe.  And a mace would be pretty handy as well.
ZBF:  Any other projects we can look forward to?
WTR:  Well, The Seven Habits is actually the first novel in what will be an ongoing series which will follow my characters up until Ocean is around 80 years old or so.  I’m expecting it to take between eight to ten books to tell the entire story arc and am currently working on book two, The Dead Trap. 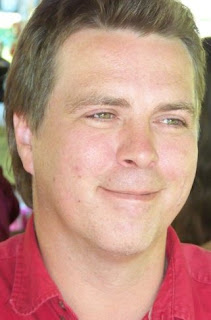 I’ve also started on a book called about a slightly insane woman who was born with a disfiguration that gives her the appearance of being an antique doll as well.  In addition to this, I’ve been discussing doing a collaborative project called Black Rain with author Carl Hose, which would be a lot of fun.  I have a lot of respect for that man, both as a writer and as a person, and working with him would be awesome.
ZBF:  Where can readers find out more about you?
WTR:  The best place would be www.williamtoddrose.com.  I also have the aforementioned and often neglected blog, Six Demon Bag which can be found at bagofdemons.blogspot.com
ZBF:  Thanks, William.
WTR:  Thank you for having me, Bowie.

Have questions or comments for William?  Please don't be afraid to leave them in the comment section below.

Bowie Ibarra is the author of the "Down the Road" zombie horror series from Permuted Press and Simon and Schuster.  The final book of the series, "Down the Road: The Fall of Austin", finds the military, police, criminals, and civilians dealing with the zpoc deep in the heart of Texas.

Network with Bowie and explore his library of Tex-Mexploitation books at his personal website, ZombieBloodFights.com.
Posted by Bowie Ibarra at 8:39 PM