I wasn't sure what to expect from the German Zpoc story, "Rammbock: Berlin Undead".  I was hoping for some solid zombie horror and a good story.  What I got was even better than expected. 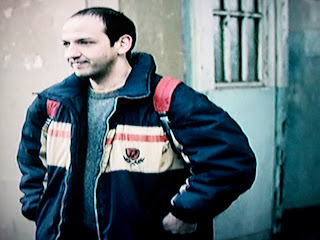 The protagonist is Michael, whose just kind of an average shlub.  As the movie opens, he's standing in front of his girlfriend, Gabi's, apartment complex and rehearsing what he's going to say to her.  They broke up, and he drove all the way from his home to Berlin to drop off the keys as an excuse to see her one last time.  He got a ride from his friend, who says he'll do fine.  As his friend drives off and he enters the apartment complex, Micheal hears cries of pain and sirens.

Things start pretty fast as Micheal enters the building.  A sick dude was doing some maintenance work when he suddenly flips out and attacks Micheal.  A kid helps him out and they both hole themselves up in Gabi's room.  In the struggle, Michi lost his cell phone.

As they secure the door, they look out the window and see the world falling apart.  People are attacking people.  Even the cops are infected.  When Michi asks where Gabi is, Harper says she said she was going out and would be right back.  Meanwhile, outside the doors, his phone rings outside, and he thinks its Gabi. 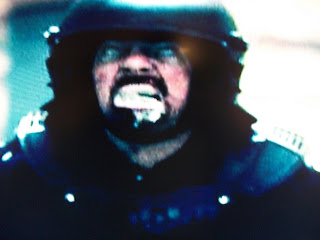 They begin to listen to news reports on the radio.  They say stay in homes.  A Mr. Brabant is the expert.  He says don't leave home to look for others or take uneccesary risks. Berlin is on lockdown.

While pundits speculate, Michael takes care of Gabi's bunny rabbit that is still in the room.

There are others who also live in the apartments and they all talk to each other out of their windows.  One guy named Manni is a strong guy, but he looks like he's been bit.

Meanwhile, it is discovered that stress and adrenaline release the power of the infection.  If people are bit, they can delay the virus taking effect by taking sedatives and downers.  But they soon discover that the radio is on a loop.

Micheal hears a noise again coming from the basement.  Harper makes weapons with fork.  Micheal says Gabi would get mad at that before the phone rings again.  Micheal says Harper can't use the weapons on the zeds because they are still people.  But they can use them to get the phone with Harper's makeshift slingshot.

When they make a move for the phone, the zeds rush them and force them back into a back bedroom.

Michi receives a call from Georg, who drove him there.  Harper tries to call his mother, but just gets voice mail.

Micheal wonders where to poop and pee, but realizes it won't matter because there's no food.

A ships sounds its horn and a guy in an apartment across the way says his wife's infected, but sedated.  He claims he only has a day's worth left.  He tells Michi there's a pharmacist that lives near Michi's position that has sedatives and would offer them food if Michi would get some for him. 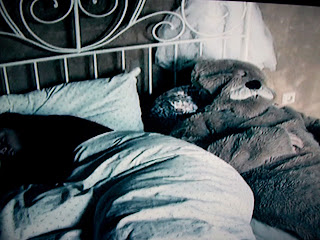 Michi and Harper sleep.  Michi wears Gabi's favorite Bear suit in bed.  When he wakes, he eats rabbit food.  When he looks out the window, Manni's hanging from a hook in his room, and Michi notices a hook in the room as well.

Harper has a camera and takes a picture of the battering ram they have made and hung from teh hook in their room to get to the pharmacists apartment next door.  They break through the brick wall just as the zeds make a move on the bedroom.

When they arrive on the scene, they find a woman praying.  Then they quickly notice she's sick and attacks Micheal.  They run to the kitchen, but zeds advance.  Micheal goes to a pantry.  Harper on a spot near the ceiling. 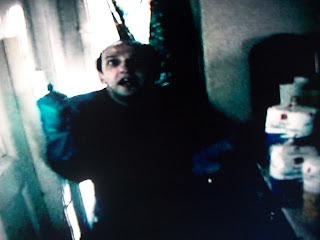 Micheal finds a cellar entrance in the pantry and climbs up it where he finds Gabi.  She is suprised and happy to find him and they share a special moment as Michi explains why he was there.

But it turns out she was up there with her new man, and it breaks Michi's heart.  He has the sedatives and gives Michi a few.

Then it all comes out, how Gabi had been seeing the guy for a few weeks.  Michi is upset and is run out of the cellar by the new beau and forced to go to the room.

Michi does't want to leave without Gabi, but she stays behind with her new man.  Michi goes up to the roof to  see Berlin in flames. 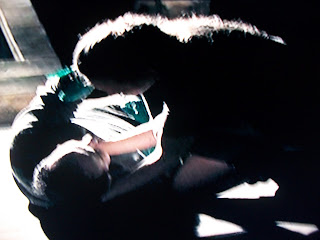 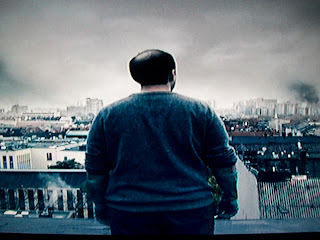 Harper is still hiding, and the zeds have given up.  He checks around the corner of the kitchen with his camera in his hiding position and the old woman turns the corner.  Scared, he clicks on the camera, taking a picture with flash.  It completely flips out the old woman, and she retreats.

After finding a way down from the room, Michi get the pills to the guys house and the man feeds them to his wife.  Michi then looks out the window to see Harper running off the zeds with camera flashes and securing the apartment complex.

But then the wife gets sick.  Michi prepares to fight her, but the guy says put the weapon down.  As the woman advances on Michi, her husband, standing by the open window, calls to her.  She runs to him and tackles him, but they both tumble out the window.

With the apartment now secured by Harper's ingenuity, the remaining four survivors, Michi and Harper, a girl and an older man, get something to eat.

They think the zeds have sensitive retinas and that the flashes cause pain.  Michi found a flood light while going through the apartment complex that could be used with the cameras as a flash.  They hear the boat again, and Michi makes a plan to take camera flashes and make a break to the port.  The girl claims the zeds can't swim.  But the boat that is available is a two seater. 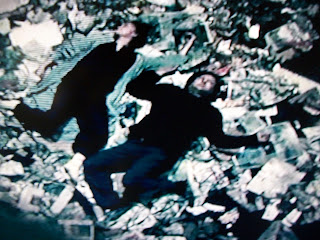 Then the electricity goes out, and the four are in the dark.

The girl says they need to do it, the one dissenter, Ulf, agrees.  They pick the morning to make the break for it.

While they sleep, Ulf makeas a break for it with the cameras.  Ulf fails, and Michi goes after him to get the camera back.  He retrieves it, but Michi got bit.  He takes a sedative to calm himself.  And he still wants to help make a break for it.

He sets up a wagon with two flashes.  He then gives the girls a handheld and tells Harper and the girl to leave.  They get on the three wheeled bike and make a break for it, leaving Michi behind.  Mozarts Requium - Lacrimosa begins as an appropriate background theme to the sadness that is to come. 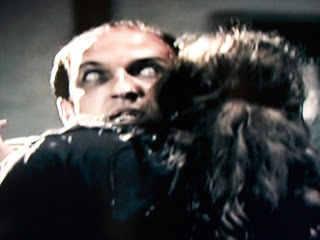 Michi stays behind, and he is showing signs of turning.  He contemplates using the last sedative.

But then the old lady chases her son out of the apartment.  Then, they are followed by an infected Gabi.  Michi calls out to her and drops the sedative.  Gabi almost attacks Michi, but stops.  Before she can do anything, Michi grabs her in an embrace as he turns.

Harper and the girl row off to safety on the Rhine River as Mozart's dirge plays on.

I was very pleased with Rammbock.  First of all, I thought the man playing Michi did a fantastic job.  I think it was great that he truly was just an average dude that wasn't much of a fighter, but used his wits to stay alive for as long as he could.  Harper was great as well, and the supporting members were great.  The reunion with Gabi was also good, and I thought Gabi was truly in the moment.

Second, it's always great to see zombie movies from the point of view of non-western artists.  I like foreign zombie stories as they give a special and uniquely cultural point of view.  This movie was no exception, and was great.

And it brought a little spin to the genre.  The fact that the infection was activated by stress and adrenaline was fantastic, and worked very well.

I thought the solution to fight the zeds was great and unique as well.  It might have had to do with budgeting not having a single firearm in the movie, but it was a great idea that really worked in the movie.  Humans using their brains and not brawn to fight the zpoc.

And in the end, it was a love story, and a sweet one at that.  Michi spends his final moments of life in the embrace of the woman he loved.  It was both a sad goodbye for Gabi and conversely for Michi, and a great final moment for the unwitting hero.

The only potential shortfall was that it was short.  However, it was enough time to tell a good story without overdoing it.

In the end, this movie comes highly recommended from ZombieBloodFights.com, driven by a touching and scary good story.  Watch it when you need a zombie movie fix.


===================
Enjoy the review?  Please share it with your friends using the 'Facebook' and 'Twitter' buttons below.  Please leave a comment below as well.
Bowie Ibarra is the author of the 'Down the Road' zombie horror series.  His latest zombie story, "The Fall of Austin" follows the struggles of military, civilians, and law enforcement as they fight the zpoc in the capitol of Texas, Austin.  It's the book author Eric S. Brown of "Bigfoot Wars" fame called, "...so hardcore and intense, you won't be able to put it down."
You can purchase 'The Fall of Austin' and any of Bowie's other Tex-Mexploitation titles here.  You can also network with Bowie at his official website, ZombieBloodFights.com
Posted by Bowie Ibarra at 3:03 PM