Welcome back from last week where we learned that survival trumps civilization in a world overrun by zombies.

This week, we open with a eulogy delivered by Rick for Dale.  Rick champions Dale's ideology, saying in effect that though he might have been a pain in the ass, he should be remembered as a man that stuck to his beliefs and was not afraid to be brave and honest and speak his mind.

Rick said Dale would be honored by the group by not letting his memory down.  The group would show that they were not broken and show their humanity.

And Shane, Andrea, T-Dogg, and Daryl show their honor for Dale by patrolling the fenceline of Herschel's farm and just stomping the shit out of any wayward zombie that might be frolicking along the countryside.  Shane and his merry men (and woman) punk out a small mob of zombies munching out on another cow and just wreck shop.

And during the wholesale zombie slaughter, we get yet another great crushed zed from the disciple and heir to Savini's special effects throne and producer of the show, Greg Nicotero.  Here, the brained zombie moment is very reminiscent of a moment from Lucio Fulci's 'Zombie', in which Ian McCullough destroys a risen Spanish Conquistador zombie here. (0:25)

Rick coordinates the team to protect the farm, as the swamp is hardening and the creek is drying up.  If the zeds also like cattle, then with the natural defenses of the farm down, they're in danger from the zeds in the nearby woods.  Herschel pitches a tribute to "Night of the Living Dead" by saying he'll keep the basement stocked as a spot to hide as a last resort.

Rick then says Shane will run the place while he's away to cut the kid loose.  Shane then teases Rick for not killing Randall the first time and that they are taking him back out to cut him loose with Daryl instead of him.  Rick tells him that's the way it has to be and he needs to get over it.

Hershel backs Rick's play, and they try to get Andrea to put Shane on a metaphorical leash.  She says Shane wouldn't be so crazy if Rick would stop running off.

Little Carl approaches Shane about how he freed the zed that killed Dale.  He also retrieved the gun he dropped and gave it to Shane, confessing that he stole it from Daryl and his misadventure in the swamp that freed the zombie.  Shane tells Carl not to blame himself, but hands the gun back to him because Shane can't watch him 24/7.  Carl needs to protect himself, but he denies the gun and asks Shane to give it back to Daryl.

Shane takes the 2012 Hyundai Touring Zombie Crusher edition to take supplies to go fix the windmill while Daryl repairs the shed Randall his held prisoner in.  We also find that Randall has been tearing his wrists up trying to escape the handcuffs. 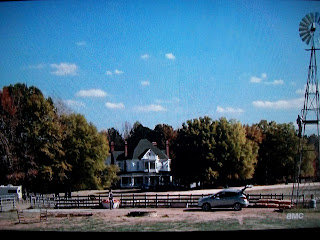 The survivors are moving into the house now, and there's a feeling that they might be under siege soon.  Maggie invites Glenn up to her room, but he says no.  He's too anxious being in her father's house.  C'mon, player.  Get up there, man.

Herschel offers preggos Lori his bed, as she needs some comfort.  As Lori unpacks, she sees Shane fixing the windmill and goes out to talk to him.  They talk about a past event where Shane showed up Rick and fixed an appliance at the old house.  Lori asks him to come down and she then decides to tell Shane that all of a sudden she 'doesn't know whose baby it is'.  She admits to putting Shane and Rick at odds, and says it must be hard for Shane having led them out of Atlanta thinking he was going to be the new father to her family.  She tells him thanks you so much, and by the way, sorry for leading you on all this time.  Nice one, Lori.  Nice one. 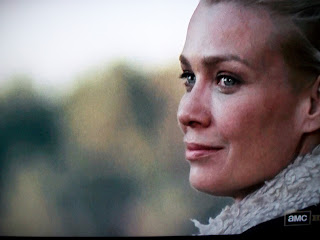 Rick talks over the plan to dispose of Randall with the 'fallen angel', Daryl.  Rick also shows appreciation for Daryl putting Dale down the night before.  Daryl says Rick shouldn't do 'all the heavy lifting.'

Shane approaches and tells Rick about Carl's incident.  He hands over Daryl's gun and says Rick should address the incident first before handling Randall.  Shane tells Rick he's not being a good father by putting Carl's reckless behavior second.

Glenn and Andrea remember Dale as they fix Dale's Winnebago, and from the episode in which Dale tossed Glenn his hat and Maggie offered to wash it, we finally have Glenn's transition into Dale's role as the heart of the group.

The family and survivors start to secure the house, and we have suggestions yet again of an inevitable siege as Rick finds his son in the barn.  We continue to move toward this 'Ibsen rule' of 'the gun' as Rick hands the gun back to Carl, telling him 'no more kids stuff' as death is an inevitability and he should be ready to use the gun. 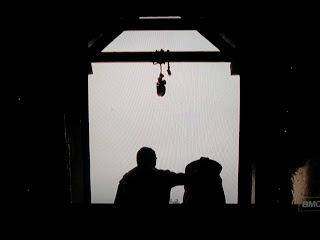 In what appears to be a move to 'one-up' Rick, Shane walks to the shed to put Randall down alone.  But before he can do it, he notices the bloody wrists and cuffs.  And the sinister gears start turning in Shane's head again.

T-Dogg hands Daryl Dale's old six-shooter and wonders where his pistol is.  As T-Dogg approaches the locked shed, he finds Randall gone and alerts the survivors.

Shane is leading Randall through the woods.  After threatening Randall, he asks him where the marauders are.  Randall confesses they are about five miles down the road from the farm.  Shane tricks Randall into leading him there because he wants to join them.  But he ends up snapping Randall's neck and faking an injury by bashing his own face against a tree, thus initiating his deadly gambit.

Running back to the farm, he tells the group the boy jumped him and escaped.  Though the shed being locked from the outside doesn't make sense to some, the moment spurs Daryl, Glenn, and Rick into action to find Randall.

As night falls and Carl stays on lookout from a second floor window of the house, Daryl and Glenn discover a lead that takes them to a living dead Randall.  They see that he was not bit, but his neck was snapped.  They draw their own conclusions on how that happened. 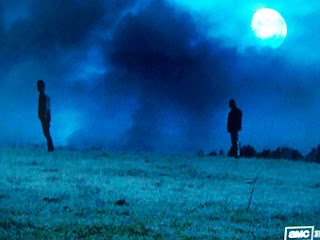 After walking further and further away from camp, Rick gets suspicious.  When they reach a clearing, its obvious to Rick what Shane is doing.  Shane points his gun at Rick and asks Rick to draw, taunting him by calling him a bad father and husband.  Rick doesn't.  In fact, he offers to put his pistol down, going a completely different direction and going soft.

Though I was anticipating a 'Young Guns' Billy the Kid/'Tombstone' Curly Bill gun flip shot, it doesn't happen.  Rick uses the inducing tactic to close the gap between him and Shane before sticking Shane in the heart with a knife.

Shane dies, but the problem is Carl, who was up in the house watching over the landscape, walks out and sees his dad kill Shane.

And its here we get the culmination of the 'Ibsen gun rule'.  Carl pulls the gun on his own father.  As his father tries to beg off, Shane rises.  It is, perhaps, yet another culmination of his foreshadowed death from '18 Miles Out' when he saw his reflection in the mirror and looked like a zombie.  Carl fires the gun.  It misses Rick and hits Shane square on the head. 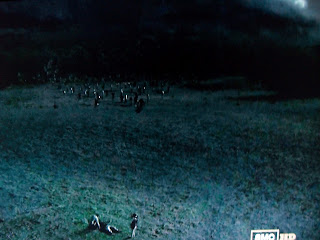 But as Shane and Carl check on the body of Shane, the zombie mob that has been wandering aimlessly in the nearby woods now advances toward the gunshot and the farm.

I have to say again the best thing about 'The Walking Dead' is the cinematography.  Whoever is doing the shooting is doing a great job framing beautiful pictures as they tell the story.

And it seems to me that they are pretty heavy-handed with the foreshadowing.  Considering some of the clues they set up in past shows, if you watch closely, you might be able to predict some things happening in the future of the series.  Who says our English lit teachers didn't know what they were talking about when they taught us this stuff?

We're down to one more episode.  And considering the zombie mob coming over the hill toward the farm, it looks like we're going to have our classic zpoc siege at the Herschel Farmstead.

And if we're lucky, we'll get the subsequent zombie feast as well.  Who will live?  Who will fall?  We'll see next week.

Start your betting pool below.  I pick Andrea.

Bowie Ibarra is the author of the 'Down the Road' zombie horror series from Permuted Press.  His latest zombie story, The Fall of Austin, tells the story of military, police, convicts, and citizens of the Texas capitol as they deal with the zpoc.

You can network with Bowie and read about his Tex-Mexploitation stories at his personal website, ZombieBloodFights.com.
Posted by Bowie Ibarra at 10:16 PM