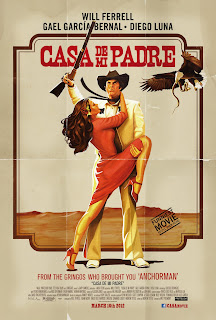 Will Ferrel and the fun bunch that brought us 'Anchorman' bring us a pretty funny parody of Mexican cinema called 'Casa de mi Padre'.  If you like Will Ferrel's brand of humor, than this is the movie for you.
The movie plays out like a Spanish 'novela' that can be seen most every weeknight on any Spanish TV station.      Gonewiththetwins.com describes the plot of the film this way: 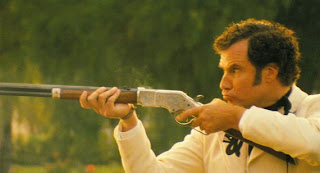 "Armando Alvarez (Will Ferrell) is a simple rancher who takes pride in his heritage, his country, and his rolled cigarettes. His father (Pedro Armendariz Jr.) isn't proud of his son, never fully forgiving Armando for accidentally killing his mother. Raul (Diego Luna), the financially successful, charming, well-dressed sibling has arrived back in town with his new girlfriend Sonia Lopez (Genesis Rodriguez), giving rise to both celebration and jealousy. But Raul is butting into the territory of opprobrious drug dealer Onza (Gael Garcia Bernal), in league with corrupt officials and conniving DEA agent Greg Parker (Nick Offerman), who is keen on offing his competition with guns with conspicuously unlimited ammo." 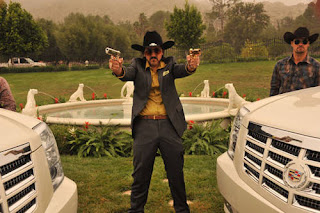 For a Hispanic who grew up in south Texas and can appreciate the jokes, the movie was good for some laughs.  Admittedly, the gimmick of a 'gringo' being the lead in a Spanish-style movie might get a little old pretty quick for some, but the fact that it was a comedy took the edge off that fact.  And its all a funny story with the same kind of humor found in 'Anchorman' or many Will Ferrel movies and SNL sketches, including a 60s vision quest, a talking white jaguar run by Jim Hensen studios, ridiculous musical numbers, a cliche and Pekinpah-esque final gunfight, and an ass-grabbing love scene that will have you laughing and squirming at the same time.
Will Ferrel did a fantastic job with the Spanish, and the supporting cast was excellent.  And they even picked up on the subtlety of Mexican culture (or at least the culture I've grown to know and love in south Texas), including the hot female housekeeping staff making 'jealous' faces at Sonia, and one of the leads finishing his alcoholic beverage after being fatally shot.
The movie was clearly a parody of '60s Mexican cinema and telenovelas, with modern themes of 'carteles' and 'narcos'.  Its the same style of movies you can find in any DVD bargain bin in south Texas.    But they used the same conventions the grindhouse features like "Death Proof" and "Planet Terror" used to parody the conventions of those low-budget cinema movies.  Exterior filming combined with interior sets, bad editing both of sound and picture, and mannequins (?) as extras. 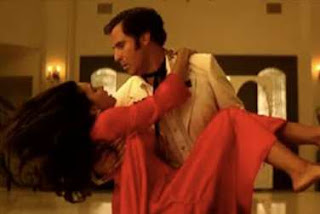 Some people might think the movie is disrespectful to the Mexican community, but I didn't see that.  For me, it was just a parody of Mexican cinema and low production values rampant in some of the films.  It reminded me of 'Black Dynomite', a parody of the classic 70s Blaxploitation films. This film did the same thing.  Like 'Machete' was a 'Mexploitation' action film, this movie is truly a 'Mexploitation' comedy.
In short, if you want a good laugh, check out this film in theatres.  It will provide easy laughs for the unititiated, but will also be filled with plenty of inside jokes and giggles for the Hispanic community as well. 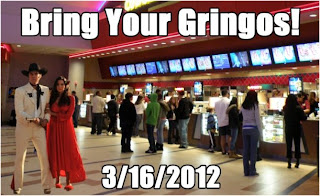 =============
Bowie Ibarra is the author of the south Texas zombie horror series, "Down the Road".  The book features the cultural diversity of south Texas and how the people work together to fight the zombie apocalypse.