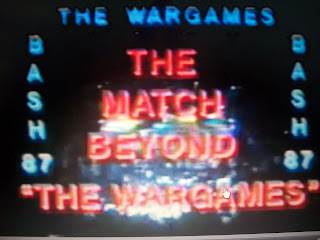 As Ric Flair, Arn Anderson, Tully Blanchard, Barry Windham, and manager James J. Dillon walk to their induction into the WWE Hall of Fame 2012 on April 1, 2012, I think it's very important to take a look back at one of the biggest matches in pro-wrestling history that defined the cruelty of the Four Horsemen and the kind of fight that their rivals had to face.  Especially if they faced them in this signature match, created to destroy The Horsemen:  War Games-The Match Beyond.

Though the Horsemen are known for many things and accomplished many great feats during the first incarnation of the stable, it is this match that stands out to me as one of their best, and a legacy to the team.  I think its important for the current WWE Universe to watch and understand how true rivalries were settled back in the classic 80s era of wrestling.

The match was held in a steel cage that was placed over two adjacent wrestling rings.  The cages were lined up right against the rings, with no outside area like in a 'Hell in a Cell', so there was nowhere to run.  There was also no referee in the ring, so anything could happen on the inside.  Very dangerous.

The match consisted of 8 periods.  The first period was five minutes, with one guy from each team starting the fight.  Then a ref conducted a coin toss to determine who would go in next, giving that team an advantage throughout the periods until 'The Match Beyond'.  During the periods where competitors entered, there were no pinfalls or submissions, 'it was just a fight'.  It was until the final competitor entered the ring that 'The Match Beyond' began, in which the winner was determined by one of the competitors quitting, submitting, or getting knocked out.

The first match set the bar for every other War Games match, and was the progenitor of such matches as 'Hell in a Cell' and especially 'Elimination Chamber'. 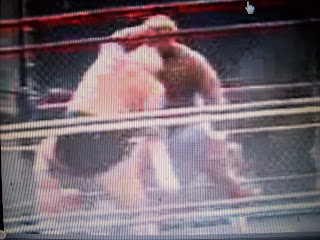 The first competitors ever in a War Games match were legends Dusty Rhodes and Arn Anderson, who mixed it up for five minutes.  They threw rounds at each other, with Rhodes even popping Anderson in the nuts with a punch.  Dream took control, planting Arn with a DDT and aggravating a head laceration by raking Arn's injured head against the cage.

It was also here we got the traditional 'throw the man face first into the cage' bit, which is mandatory for cage matches.  Dusty did it here before slapping on his vaunted Figure Four.  Since there was no submission yet, Rhodes broke the hold to see who would win the coin toss.  It turned out to be the Horsemen winning the coin toss, bringing Anderson's Texan tag partner, Tully Blanchard, into the ring to double team Dusty.  And boy did they go at it.  Blanchard slapped on a Figure Four on Rhodes before having to break the hold getting ready for the odds to be even by the next member of Dusty's team. 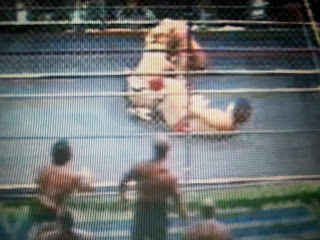 And boy did the odds get even.  Animal of the 'Road Warriors was brought into the ring, who proceeded to pendulum swing Blanchard into the fence and give Dusty a chance to attack Arn.  Animal gave Blanchard the fence treatment before Dusty came in to add more abuse to Blanchard.

Before long, however, the next Horseman made his way into the ring, and Dillon sent in Ric Flair, who went after Animal with Arn.  Animal got the fence face toss as the Horsement took control and did it again.

It was back and forth before the teams were even again when Nikita Koloff jumped in to wreck shop.  Flair tried to gouge his eyes to stop his progress, only to make the big Ruskie mad.  And there were Russian sickles to go around.  Animal even press slammed Flair.  With the odds even, Rhodes team was tearing it up. 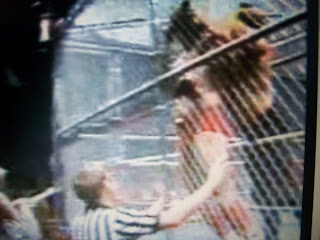 But the Horsemen regained the advantage with Lex Luger entering the cage, going after Koloff and Animal.  After being punched in the nads by Flair, Koloff was hit with two spiked pile drivers from Flair and Blanchard.

It's important to understand that the pile driver was not your average move.  It was considered very devastating back in the day.  A spiked pile driver was enough to end your career.

Then Hawk came in to even the odds and went right to work against all of the Horsemen, giving his friends a chance to regroup and counterattack.

But after attacking the genitals of two Rhodes teammates, Flair slapped on the figure four on Rhodes before the Horsemen were to take the advantage. 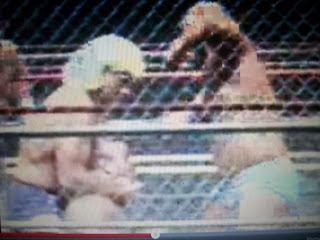 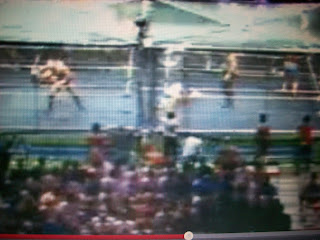 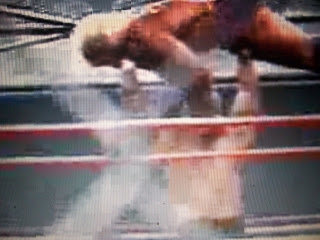 Next in was J.J. Dillon.  Like an idiot, Dillon went right on the attack against Hawk, the freshest dude in the fight.  That didn't sit well with Hawk, who returned fire on Dillon.  With Dillon a liability, the Horsemen still had to fight to keep the advantage. 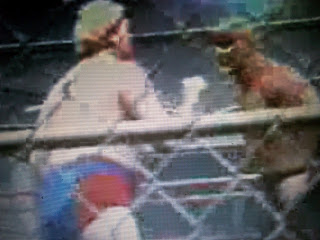 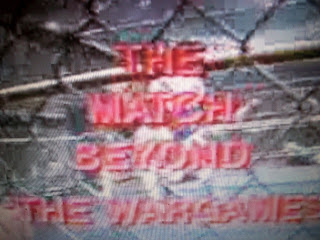 Finally, Paul Ellering entered the ring, thus initiating 'The Match Beyond', submission or surrender.  It was now at this point that the match could be won by one of the teams.

Ellering was wise and went right to work against Dillon.  At this point, with the Horsemen occupied, Paul Ellering was using a spiked wristband against Dillon, splitting him open.  It was then that the Road Warriors double teamed Dillon.

You had to know Dillon and Ellering were the weakest links on each of the teams.  Why the Horsemen didn't go on the offensive against Ellering like the Road Warriors did against Dillon is beyond me.  The Road Warriors set up Dillon with a variation of their 'Doomsday Device' and planted him into the mat.  Hurt, they forced him against the cage and stomped him until cageside ref Teddy Long (yes, that Teddy Long), heard Dillon surrender, ending the match. 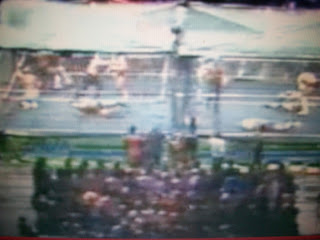 There was another match in this same wrestling year with a similar result.  And though the match seemed to run the same way, it is this match that will be remembered as the first and the best ever.

More 'War Games' matches were to follow.  Many matched the brutality of this one.  But like Shawn Micheals/Undertaker in 'Hell in a Cell', this one set the standard for the ones to come.

ZombieBloodFights.com would like to say congratulations to the members of The Four Horsemen who will be inducted into the WWE Hall of Fame 2012.


Bowie Ibarra is the author of the 'Down the Road' zombie horror series from Permuted Press and Simon and Schuster.  His combat sport themed books, "Pit Fighters: Baptism by Fire", and "Pit Fighters: Double Cross" feature a Mexican luchador who crosses over into MMA.

You can network with Bowie and learn about all of his Tex-Mexploitation books at his personal website, ZombieBloodFights.com.
Posted by Bowie Ibarra at 9:45 PM