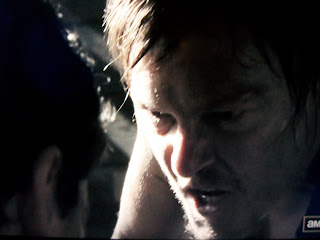 When the Zpoc finally arrives, all the rules change.  All of them.  And "Walking Dead: Judge, Jury, Executioner" opens with that cruel and harsh truth.

When we arrive back on the scene, everyone's favorite roughneck, Daryl, is torturing Randall.  I'm not going to mince words here.  He's torturing him by pounding him in the face, cutting at his scabbby leg, and generally abusing him.  Daryl is trying to get info about the survivors Randall was hanging out with.  He does, but out of nowhere, Randall and his guilty conscience goes off about how he and his old running buddies found a group of survivors and raped the young girls of the group in front of their family.  He gets a swift and firm kick in the genitals for that.

It's a sad commentary of what would happen at the fall of civilization, but a true one that will be the focal point of the show.

Daryl tells his group of survivors that if those guys find them, they've got enough firepower to crush everybody in the farm and violate the women.  Rick says it's time to kill Randall, because if he gets loose, they could be in big trouble.

Dale has a problem with that quickly, appealing to Rick's lawful nature.  He wants just the rest of the day to petition the other members to save Randall, as he's just a kid.  With no perspective on what Rick, Glenn, and Herschel went through, its what makes sense to him.

So Dale first approaches Women's Libber Andrea, who promptly denies him.  She stays with the Shane party line, saying we are no longer civilized, while Dale says its not about civilization, but our humanity.  Clearly, he still believes in the good in a world gone bad.

Andrea guards Randall to make sure no one comes to kill him before the group meeting.  Shane and Carl (Rick, Jr.), complete with his symbolic hat representing his father, walk to the barn.

While Shane and Andrea talk about how stupid it is to talk over the inevitable execution, Carl checks out the mysterious rogue, who tries to petition the boy for mercy before Shane runs Carl off.  Shane almost blasts Randall for getting in Carl's ear before playing daddy to Carl and explaining the error of his ways.  Then Shane makes the cryptic statement, "Stop trying to get yourself killed." 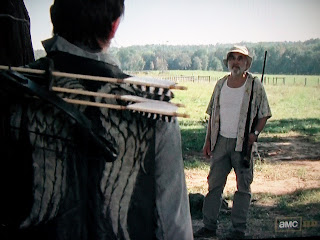 Dale lobbies Daryl to his cause, but Daryl claims 'the group is broken', so he'd rather be alone.  Daryl is also wearing this 'angel wings' vest that I don't remember from previous shows.  Is he some kind of fallen angel?  Or angel of death?  At any rate, Dale says Daryl is a decent man and different than Shane, but Daryl doesn't buy it.

Rick finds space in the barn to hang Randall as Lori joins him.  She asks about what went down in town, and Rick says it doesn't matter.

Meanwhile, young Carl is trying to sort things out at Sophie's grave when Carol comes up and says Sophie is in heaven.  Carl tells her she's stupid for believing that and runs off.  Carol rats out Carl and tells his parents what happened.  When Lori tries to calm her down, Carol flips out and says she's not crazy.

Daddy Rick talks over Carl's discussion, saying Carl should 'not talk, but think' and tells the boy he needs to apologize.  Carl then asks his dad how he's going to kill Randall.

Dale pleads his case to Herschel, but Herschel is a changed man now and just wants to stay out of it.  He leaves it with Rick.

Carl wanders out by Daryl's campsite and snatches a gun from his SS motorbike before walking into the woods for some adventure.  This means Daryl is now short a gun.

Carl finds a zombie stuck and catatonic in the same muddy area where Herschel was finding friends.  The zed was stuck until it saw Carl and tries to make a move at him.  But it can't go anywhere.  So Carl starts to jack with it, throwing rocks at it and teasing it.

Dale approaches his nemesis Shane, asking for his support to no avail.  Meanwhile, moments after Herschel helps out his recovering daughter, the old man provides Glenn his blessing to date his daughter by passing on a family heirloom watch to him.  Glenn has been invited in as part of the family.

Rick holds his meeting to tell the others he's going to kill Randall, and he's going to be the one to do it.  And though Lori has misgivings, she stands by her man and his call.

Carl is still teasing the zombie, getting closer to it.  He pulls out the gun when the zed breaks loose and knocks the gun out of his hand.  He ditches the gun and runs off whining like... well... a little boy.

Carl makes his way back to the house for the meeting before walking out.  Rick wants to know where everyone stands and the informal parliamentary procedure begins.  Dale tries to put words in Glenn's mouth, but Glenn says he's a danger.  They all go through alternatives, with Rick hearing out the discussion.

Dale makes a case for 'rule of law' and 'civilization'.  Carol flips out and doesn't want anything to do with it, but Dale throws back at her that inaction is like letting them kill him anyway.

Dale again tries to appeal to their hearts, that the world can't be lawless.  It's ugly now, but it doesn't have to be ugly.  As much as he fights for the kids life, no one stands with him until Andrea speaks up.  But no one else backs her play, even Shane.

Dale walks out, confirming Daryl's assertion that the group is broken.

Night falls and Rick, Shane, and Daryl take Randall to the barn to shoot him.  Rick seems like he's stretching it out more for himself than the kid, by asking him questions 'do you want to stand or kneel', 'any last words'.

That's when Carl shows up to watch and asks his dad to do it.  That shakes Rick and he literally cannot pull the trigger.  He spares Randall and tells the group they're going to keep him in custody for now.  He confides in Lori that Carl showing up made him make the decision.

Dale has wandered off, not wanting to be a part of the execution, and finds a cow torn open in the field.  Before he knows it, he is attacked by the bog zombie Carl had inadvertently set loose.  Before his friends can find him, Dale's stomach is torn open by the zed and he is bleeding to death.  Daryl knocks the zed off and stabs it in the head.

With no way to save him, Daryl, perhaps the angel of death after all, puts a gun to Dale's head after Rick couldn't do it yet again.  Unable to speak, Dale says all that needs to be said by raising his own head to the barrel of the gun.  Carl realizes what happened, and is now affected as well.

I have to say, I'm a little upset at Rick for putting everybody through the paces on deciding to execute the kid, then getting cold feet last minute.  Even though he backed down, he should have passed the duty to Shane or Daryl, who were both ready to do it anyway.  Everybody agreed, everybody was ready to bear the emotional burden, and he backs down.

You got to appreciate Dale's final day, spent defending the old world and standing by his principles.  In the end, it was all a discussion about survival vs. civilization.  I hold that while returning to a civilized time might be a long-term goal, the fact is at Zpoc Zero Hour, it's all about survival.  Rule Changes.

Poor Dale didn't see what Rick and Shane saw at the bar and the potential danger inherent in the kid.  All he saw was a scared child.  Scared and wounded children are a sad truth of even a 'civilized' society.  But those same children grow to know the importance of survival and what needs to be done to protect themselves from anything and everything.  When anyone is continually abused or neglected, they learn quick what to do to survive.  They might lack tact or manners, but they have a streetwise wisdom that many 'civilized' people were never taught.

So, in the end, whose the more prepared for the harsh realities of the world, or the Zpoc?  When civilization falls, who has the tools to survive?

Though Randall was spared by the zpoc fun bunch, there's no question he's now that scared child that Dale wanted to nurture and protect.  With Dale gone,the abuse, and the mental anguish of being moments away from execution, you can bet that boy's going to do what he can to survive among a group of people who, while acting civilized, threatened his life.

Two more episodes, folks.  And it looks like this episode revealed a kind of theatrical 'Ibsen-esque Gun' moment.  We were told of massive firepower from Randall's old running buddies.  With that 'gun' revealed to the audience, that gun eventually has to go off.

We'll see if it eventually does.

Enjoy the blog?  Share it with your friends using the 'Facebook' or 'Tweet' buttons below.  Leave a comment with your Blogger or Google+ account.
Bowie Ibarra is the author of the 'Down the Road' zombie horror series from Simon and Schuster and Permuted Press.  'Down the Road: On the Last Day' deals with a small south Texas town that secured its city, but becomes threatened by a secondary menace: The UN!  It has an amazing ending Ursula Raphael of Zombiephiles.com called, "...the best revenge scene since 'The Count of Monte Cristo'.
You can network with Bowie and explore his Tex-Mexploitation books at his official website, ZombieBloodFights.com.
Posted by Bowie Ibarra at 4:40 PM