Our favorite zombie apocalypse novela returns for another fun-filled week of living dead drama.  This week the show opens with an artsy-fartsy WTF is going on, featuring Rick, Shane, and Randall in trouble out in the field with zombies.  After the opening credits, the show goes back a few hours before said attack.
The show separates the women and the men as its theme in two different conflicts appropriate for the gender.  For the males, its physical solutions to conflict resolution.  For women, its emotional solutions.
THE MEN
The Rick and Shane (with Randall bound and blindfolded in the back) pull up to a crossroads.  And its appropriate, because this is a symbolic crossroads for Rick, as he has a 'come to Jesus' meeting with Shane.
Rick opens the conversation with putting the rumor that Dale had been circulating around camp about the 'Otis incident' on the discussion table.  Rick puts words in Shane's mouth, and Shane runs with it, saying he did it for Carl and claiming Otis was a weak link anyway.  Shane calls Rick the good guy, but Rick says he isn't, as he'd also do anything for Carl.

Rick tells Shane Lori's opinion of him, and how he felt when she told him Shane had knocked her up.  Rick emphatically states he's Lori's man, and that Shane needs to deal with it.

Shane brings up how it all played out between him and Lori at the advent of the Zpoc, claiming he found strength in Lori and Carl and that it was never his intention to bang it out with her.

As they get back into their zombie deathmobile, Rick says they need to start using knives to put zombies down to save ammo and not attract attention.  Rick says the winter weather will help defend against the zeds as Shane watches a lone zombie meander through the field in the distance.


The mission was to travel up to 18 miles in their Hyundai Zombie Deathwagon and drop off Randall, but Rick goes a little further to an old Public Works facility, where Rick walks the walk and takes out a ghoul with a knife strike to the head.  Shane follows suit, and they enter the premises to scope it out.  They find the place trashed, and also a curious heap of burned bodies and an abandoned school bus.
They notice the first two zeds weren't bit.  They can only assume scratches infected the dudes.
So they bring in the Hyundai Living Dead Dominator-mobile to drop Randall off.  Randall pleads for his life, and Rick leaves a knife for him.  But when Randall mentions that he went to school with Maggie, Rick and Shane realize the dude knows the family.  That would mean he would know where she lives, which would mean he could potentially bring his old running buddies back to the farm.
In what came across as an Aries/Libra battle of opposites, Shane was about to blast Randall in a fit of emotion, but Rick stops it.  Rick says he needs to take a day to rationally think over killing a living dude.
The philosophical discussion about 'rule changes' and their rational argument suddenly becomes physical when Shane says again that Rick is incapable of leading the fun bunch back at the farm.
The two go all Roddy Piper/Keith David from "They Live", smacking each other around in a fight for supremacy while Randall crawls to the knife.  Shane picks up a giant wrench and tosses it at Rick, but it smashes through a window.  Then in what might be a bit of foreshadowing, Shane sees his reflection in the broken glass and looks like a zombie until a real zombie rises from the broken window, quickly followed by a small gang of ghouls. 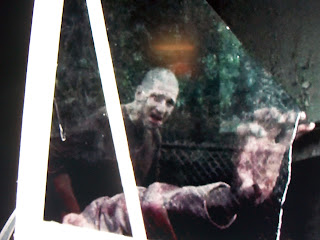 And now, the zombie smashing action everyone claims the show lacks begins.
Randall ends up freeing himself, and after using a chauvinistic slur to a dead zombie that tried to get him, stabs the woman in the back of the head several times.
Rick almost eats it (or, perhaps, gets eaten) by zeds.  After a struggle on the ground, he ends up blasting them.  Check out the pic below of some great Nicotero effects.  Who needs CGI when a dummy works just as well. 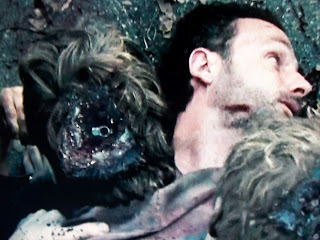 Shane gets cornered in the bus, and using a tactic Rick used earlier (cutting himself and using blood as bait), he rubs his blood on the edge of the bus door to give him a clear shot with his knife.  And it works.
But he does it again, rubbing his open wound on the blood that the first zombie licked.  Ummm, blood-bourne pathogens, anyone?
Randall convinces Rick to run, and Shane is suddenly put in the Otis position as he watches Rick and Randall run away.
But before Rick can run completely away, he sees the dead security guards and is motivated to make a move to save Shane.  Randall takes the wheel of the 2012 Hyundai Zombie Reaper while Rick rides shotgun and they rush to Shane's aid and drive away.
They end up securing Randall again, and Rick says if Shane wants to kill him, he's going to have to do better than a wrench.  He then says they're probably going to kill Randall, but he still has to think it over.  Rick then once again emphatically states he's Lori's man and the leader.  But he invites Shane to walk in line with his party line.
As they drive back to the farm, Shane sees that lone zombie walking out in the field.  Alone again.
And, as usual, the final moment takes on an artistic shot of the zombie just shambling away, reminiscent of the Andrew Wyeth's 'Christina's World'. 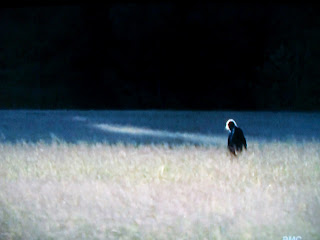 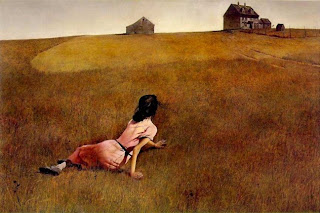 THE WOMEN
Lori and Maggie are making lunch for the still emotionally injured Beth and Lori talks about Glenn and how he's changed.
Lori brings Beth the food and suggests a walk, but Beth brings up Lori being preggo and can't believe she still wants to have the baby.  Lori steps out of the room, leaving Debbie Downer to the meal.
Lori returns a little later to see how Beth is doing, and she's weeping.  Lori tries to empathize, but Beth is going full emo, saying life is pointless at this juncture.  Lori emphasizes her family, and Beth thanks her for the support.  When Lori goes to take the walk after putting her meal back in the kitchen, she notices the steak knife is gone.  So she goes back to get it from Beth, who gives it up without a fight.
Lori goes to Andrea and asks for Herschel and/or Maggie, but they're nowhere around.
When Maggie arrives, he throws a guilt trip on Beth about wanting to kill herself and calls her a quitter.
As the sisters argue it out, Lori and Andrea disagree on how the sisters are handling it.  Andrea takes a more pragmatic tone, while Lori plays mama bear and defending Maggie and Beth.  Lori goes after Andrea's more militant turn, saying the zombie smashing should be left to the men.  But Andrea gives Lori her Shane-esque dose of reality, saying Lori can't lie to Beth, and Beth needs to make her own decision.
Maggie lays the guilt on thick, when Beth takes a different angle to her desperation:  She asks Maggie to kill herself along with her.  Beth feels there's no hope, and that her destiny is to be 'gutted'.  She begs her sister to join her in a duet suicide later that night.
Andrea comes by the room and lures Maggie out to give Beth room to make her choice by leaving the emo to her own devices.  It doesn't take long for Andrea to leave the room and let Beth sort it out herself.
Soon after, Lori and Maggie hear Beth crying and find her locked in the restroom.  Glass shatters before Maggie jimmies the door open and finds Beth's wrists bleeding.
Maggie confronts Andrea.  And though Andrea sees the silver lining for Beth (she chose life for not going all the way with the suicide), Maggie doesn't see it that way and banishes Andrea from the house.  Lori lets Mags make the move, and defends Andrea's assessment that Beth chose life after Andrea leaves. 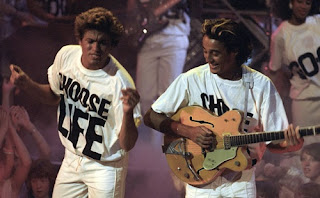 It's another good episode for the series, and we'll see how things play out next week.
====================
Enjoy the blog?  Please share it with your friends using the 'Facebook' or 'Twitter' buttons below.
Also, please leave comments or your thoughts below with your Blogger or Google+ account.
========
Bowie Ibarra is the author of the 'Down the Road' zombie horror series.  When describing Ibarra's most recent novel, "The Fall of Austin", Jonathan Mayberry (NY Times Bestselling author) said, "Bowie Ibarra kicks undead ass."
You can pick up 'The Fall of Austin' here.
You can also network with Bowie and explore the other books in his library at his personal website,
ZombieBloodFights.com
Posted by Bowie Ibarra at 12:24 AM