FIGHTS: Elimination Chamber '12 - E-Lame-ination on the Road to 'mania

Part II of a III part 'Road to Wrestlemania' recap from ZombieBloodFights.com. 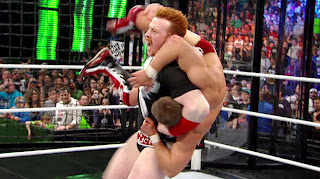 All I know is I'm glad I got in to watch WWE Elimination Chamber 2012 for free.  Rumble '12 was alright, but this PPV did not get me excited for Wrestlemania in the least.  That didn't make me feel good.
Part of it was arriving to a WWE PPV immediately after watching a marathon indy show with ACW. Late.  The other part was these strange and bloodless Chamber matchups.
It's a moot point, but I think it needs to be said again.  The Elimination Chamber has been castrated of all its potency when you take blood out of the mix.  It's time for WWE to retire this match.
Good thing CM Punk kept his title, however.  His chamber match opened the show against Kingston, Ziggler, Miz, R-Truth, and Jericho.  Punk eliminated Truth.  Then, the remaining stars mixed it up until Jericho came in and wrecked shop, eliminating Ziggler and Kingston.  But Jericho then got KO'd by a kick from Punk that knocked him out of the cage when the door was open to let Kingston out.  He could not recover enough to return.  So Punk fought the remaining Miz and won, retaining the title.
Jericho contends he was never beat, just KO'd.  Well, if ring officials say you couldn't go, that's a TKO, brother.  Tough luck.
Beth Phoenix retained the title in a Diva's match.
Then, the next Chamber match occured.  Champ Bryan vs. Santino vs. Khali vs. Rhodes vs. Barrett vs. Big Show.  It had some highlights, including Big Show smashing through the chains above Bryan's pod and entering the pod to whip up on him.
It ended with Santino being last and put to the test against Bryan.  He even had a chance to hit the Cobra for the pin, but didn't get it.  Bryan quickly reversed it into a LeBell Lock for the victory.
But then, hypocritical centerpiece for the 'Be a Star' anti-bullying campaign, Sheamus, comes down to the ring, fresh, to attack a post-Chamber Bryan.  The Irishman bullies Bryan, who tries to stick up for himself and defend himself with strikes for the unwarranted attack before being dropped into a Celtic Cross, a V-8 variation of Davey Vega's move.  ;)
What a dick.  I don't know how anybody could cheer this guy for jumping a dude after he just competed in an Elimination Chamber.  I know he won Rumble, and Bryan tried to pull his punk card on Smackdown.  But what kind of future champ jumps a dude after he wins a brutal battle?  I hope Bryan trashes this guy come Wrestlemania.
Then, the All American American defended his US title against Justin Gabriel.
Finally, the Ambulance Match.  First person to stuff a person in an Ambulance wins.  It was an alright brawl, with Cena hitting his FU off the top of the ambulance for the ultimate win.
And that was it.
All I know is Rumble '12 was better than this PPV.  I hope Wrestlemania isn't as bad a letdown as this PPV was for me.
Or maybe I shouldn't go to a good indy show before a WWE PPV again.

=========
Did you enjoy the blog?  Share it with friends with the 'Facebook' and 'Twitter' button below.  Leave a comment below with your Blogger or Google+ account.
Bowie Ibarra is the author of the "Down the Road" zombie horror series from Simon and Shuster and Permuted Press.  His upcoming "Pit Fighters: Baptism by Fire" is a combat-sport themed story featuring fighters from around the world competing in No Holds Barred competition.
Network with Bowie via his official website ZombieBloodFights.com.
Posted by Bowie Ibarra at 2:01 PM