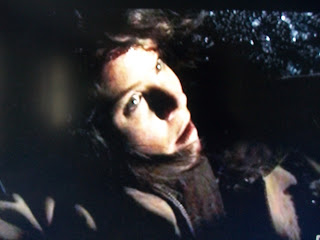 AMC's "The Walking Dead" started setting up the dominoes in "Nebraska".  Dominoes are still being set up, but this time around, we see who might be the ones who will be knocking them down.

Show opens with Lori, who, it seems, has been passed out from the wreck.  She wakes just in time to see a zombie working its way through the crashed windshield as night has fallen over the land.  Lori's begins struggling to get out of the car as the zed tries to work its way through the glass.  Great special effects moment from Nicotero and friends as the zombie's face is torn away as it tries to force its face and head through the glass.  After stabbing the zed in the eye and blasting another outside of the car, Lori makes her way back down the road to the farmhouse.

THE TRIO'S OK CORRAL-ZPOC STYLE
The show works its way back into town, where Rick has just offed the east coast douchebags at the bar.  As they make their way out of the bar, as anticipated, the dead interloper's friends show up outside, making Hershel, Glenn, and Rick have to wait in silence as the informal search party checks things out.

But before long, the search party finds the three in the bar and calls out to them, as Glenn is holding the door closed.  The searchers call for their friends, and Rick admits to killing the two.  After pleading his case, a gunfight breaks out, forcing Rick and Co.'s hand.  They decide to try to escape out the back, with Herschel covering Glenn, who is the youngest and fastest as he runs to the car.

When Glenn makes his move, he is shot at by one of the searchers.  Herschel critically wounds the searcher, but thinks Glenn was shot, as he was not moving.  It turns out Glenn freaked out and froze stiff.  Rick and Herschel arrive to lend support as the interlopers make a break for it.

But one of the kids gets his leg impaled on a fence as he tries to jump off a roof to his buddies.  His friends leave him to die, leaving his fate to Rick and Herschel.  They consider killing him, as his cries are attracting the dead.  Herschel says he could conduct a surgical procedure, but it would take time.  The dead make a move on the scene of the activity as the trio commits to helping the wounded interloper.  With the pressure on, Rick makes an executive decision and just yanks the kid's leg off the spiked fence.

THE LORI SITUATION
Shane and the farm fun bunch are about to break bread for dinner when they realize Lori's not around.  Carol goes to Daryl's campsite and asks if she knows where Lori went.  He says he doesn't know, but she came around asking for him.  He's still bitter he couldn't find Sophie and takes it out on Carol.

When Carol tells the people back at the house, Shane drives out to find her after getting in Dale's face again.  Shane ends up finding the wreck and evidence that she made it out.  He ends up finding her further down the road.  When she asks if Rick made it back, Shane lies and says yes, knowing she would stubbornly try to go back out again.  She's relieved to find that news.

Back at the farm, Carol freaks out a little bit at the animal skins and ears Daryl has collected.  She feels him drifting from the group, and wants him to stay.  But Daryl runs her off, calling her a busybody, saying she's just lonely without her family, and puts the blame of Sophie's death on her.

Back at camp, Shane brings Lori back, and Lori realizes Shane lied to her.  Shane lets the cat out of the bag in front of her son, Carl, that all he wanted to do was make sure the baby was okay.

Lori sits with Dale, Andrea, and her son, the symbolic 'little Rick', wearing his dad's hat, and apologizes to him for leaving.  He says its okay, he wasn't scared, showing those signs of being cold, even though he was scared.  Shane butts in and apologizes, and Dale eyeballs Shane on his way out of the room.  Lori then gives Shane a hard time for that lie, for what she thinks now is the 'Rick dead' lie, and then sees what kind of reaction she'll get for asking about Otis.  Then, she tells Shane she told Rick that Shane helped make the baby in her tummy.

Shane then gets upset, saying he felt their moment together was real, and she did, too.  But Lori denies him.  That doesn't sit well with Shane.

Next day, the Patricia is still in a kind of shock, and Maggie shares a story with Andra from her youth about boys, birth control, her sister Patricia, and her dad.  Andrea assures her they'll find her dad.

As Andrea joins Shane to go find Rick and Co., Dale warns Andrea about Shane's motivation.  Being the most perceptive, but most impotent of the group, Dale again intimates that Shane killed Otis.  But Andrea is clearly in Shane's camp, and defends him.

Before the search team can make their run, Rick and company return.  Maggie runs passed her dad for Glenn.  Carl runs to his dad.  When T-Dogg spots the wounded kid, Randall, Shane eyeballs Rick.

TENSE REUNION
Herschel helps the kid as the team has a group meeting on what to do with him.  Everybody thinks his friends might try to find him.  Rick says let the kid get better and send him off.  Daryl shows up with the team midway, as Shane says its a bad idea to leave him because his friends might find him and come back.  Rick says his friends left him for dead.  Shane gets upset at the boy, but Herschel puts him in check saying he shouldn't be talking trash because he still let them stay even after the barn incident.  The property is still his, so Shane should shut his mouth.

Glenn tells Maggie he feels like a coward because he hid to stay alive for Maggie's love.  He feels bad because Herschel and Rick were counting on him, and he dropped the ball.

Maggie gives his dad a hard time for hitting the bottle.  Then Andrea approaches Shane to be more of a softer touch with his hardline leadership style.  But Shane holds his ground, saying Herschel and the rest don't know what it takes.

And the most haunting finish to the show is Rick and Lori, husband and wife reunited, changing in the tent.  Rick had been cool with the Shane situation until Lori brings up Shane wanting to be the one and only father to the baby.  Lori then starts calling him delusional and dangerous, brings up the lie he told to her, the barn, threatening Dale, and suspicions about Otis.  But what seems to affect Rick the most is when Lori claims Shane said Rick couldn't protect the camp and that he will get everyone killed.

'The Walking Dead' is still setting up the dominoes, but now we have a few new people who might be the ones who will be knocking them down.