by Bowie Ibarra
Zombies are taking the world by storm.  Some of the best zombie horror is coming out of Europe.  And  like in the west, there are bloggers following the zombie wave not only in Europe, but the world.  So without further ado, ZombieBloodFights is pleased to welcome Swedish zombie enthusiast, Jonny Berg. 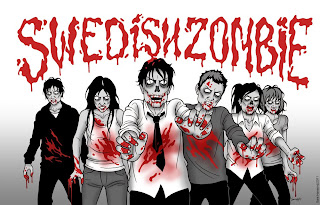 Full Name: Jonny Berg
Nickname: Swedish Zombie
Primary Specialty: Swearing, cursing and other inappropriate language.
Secondary Specialty: To take a swing and the run for it!
Quote: It is never too late to give up!
ZombieBloodFights.com - Jonny, its great to finally talk with you.
Jonny Berg - It's great to be entitled to participate on your blog, Bowie! An honor! And it was cool to interview you on swedishzombie.com!
ZBF - Zombie horror has really been an influence on the world.  What are your opinions of how people in Sweden are enjoying zombies?
JB - We Swedes consume a lot of zombie flicks. In book form, it is Max Brooks and Carrie Ryan that is the most successful since they've been translated. In the specialized bookstores you can course find books by other great writers, but in the usual bookshops they shine by their absence. Though the same applies to most of the horror and science fiction genre.  And thanks to the internet, there are obviously many Swedes enjoying the works of American and British zombie authors.
ZBF - Jonny, when you’re not writing about zombie news, what are some things you enjoy doing?
JB - In the summertime and during hot days I love to sit on the balcony and drink beer. In periods I listen much to music, often then Johnny Cash and Waylon Jennings. At least after the first ten beers, haha​​. And I always read, in most any genre and also a lot of nonfiction.
ZBF - I love asking people outside of the US this next question.  If I were to visit Sweden, what beers would you recommend to me?
JB - If you like light beer Sweden is a good country to visit, I think! My favorites are the different sorts from a brewery called Mariestad. Especially their Mariestad Export:
"This characterful, amber ale of dortmunder type has been appreciated by great personalities of all times. The beer's unique flavor comes from slightly burnt malt and hops varieties of German Perle and Spalter Select. The result is a rich, malty and bready beer as a reward for anyone who enjoys it." http://www.mariestads.se/
ZBF - There have been some great zombie authors coming from Europe, specifically the UK, including David Moody, Wayne Simmons, and Iain McKinnon.  Are there authors from Sweden that fellow zombie enthusiasts should keep an eye out for? 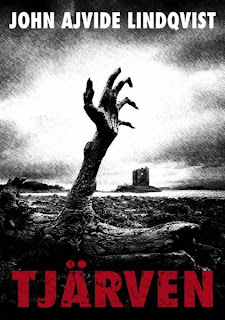 JB - Hmm. Sweden is a small country with approximately ten million inhabitants. One of them is a writer who sometimes writes about zombies. Namely John Ajvide Lindqvist, author of”Let the Right One In” (vampires) and “Handling the Undead” (sort of zombies) He has also published a novella entitled “Tjärven” that is a real splatter feast, but that one is not translated into English yet. But it is something to keep an eye out for. Except that Swedish horror writers are seldom translated. The larger Swedish publishers do also rarely publish horror and the supply is meager, but that is starting to change now with new, smaller publishing companies with balls and better taste!
ZBF - What were some of the movies or books that made you appreciate zombie horror?
JB - Of course it all started with Romero & Russo. But also flicks like Raimi's “EviDead” and Cronenberg's “Rabid”, which both had some “zombie qualities”. And earlier on I really loved Stephen King's “Pet Sematary” that I look upon as a sort of zombie story.
ZBF - In your opinion, when you read a zombie story, what are the most important elements for you as a reader?
JB - That the protagonists have more to lose than their lives. A hero battling a horde of zombies is cool, and I really love the blood and mayhem, but in a really good book there is more. Zombie fiction for me is a lot about loss and grief. If there are only descriptions of hungry zombies tearing people apart as if they were roasted chicken, it soon becomes boring. There must be more at risk. Love and friendship always complicate things in a good way. No one wants to be eaten alive, but even worse is to see your brother or your children dying . So the threat of that is an interesting thing.
ZBF - It seems you do enjoy reading.  What are some books and authors both inside and outside of the zombie genre that you have enjoyed reading?
JB - During my first year as a zombie fiction reviewer I have soon read almost 130 anthologies and novels. And it has been really fun doing that since there are so many great books out there. To pick a few authors who have had a real impact on me, I would list Alden Bell, Craig DiLouie, David Moody, Jason Hornsby and Tony Monchinski. And yes, you’re Down the Road series also end up on that list now, since I've read and enjoyed them all!
ZBF - Pick one:  Zombies, Blood, or Fights? 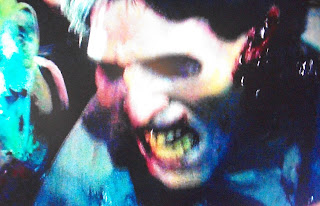 JB - I pick ZOMBIES! The other things will nevertheless appear as an inevitable result of them!
ZBF - What would be your weapon of choice during the zombie apocalypse?
JB - To be honest: I would prefer to be a living dead myself, during the zombocalypse. But since that would be a dreadful thing to await, I would pick me a really nice crowbar, thick and heavy. The crowbar is deadly and most important of all, silent! I think speed and silence is of essence. And also, the only Swedes that are armed with fire arms are hunters or criminals. So finding a M16 or something like that is slightly not going to happen. The crowbar is also good for breaking up doors when scavenging or fleeing the walking dead!
ZBF - What is the website people can visit to see all the great reviews and interviews you’ve done?
JB - Everyone is much welcome to www.swedishzombie.com! Not everything is translated into English though. But the book covers are always neat!
ZBF - Thank you, Jonny, and best wishes to you!
JB - No, thank you, Bowie! This was great fun & something I will brag about for a long time! Keep up the good work on the blog!
============
Bowie Ibarra is the author of the zombie horror series "Down the Road" from Permuted Press and Simon and Schuster.  His latest zombie novel, "The Fall of Austin", is centered around three different social factions dealing with the zombie apocalypse.  You can order the book here.
Network with Bowie at his official website, ZombieBloodFights.com.
Posted by Bowie Ibarra at 12:07 AM