BLOOD - REVIEW - Ilsa: She Wolf of the SS is the definition of going too far.

By Bowie Ibarra
You don't pick up a title like "Ilsa: She-Wolf of the SS" and expect a classy Acadamy award winning movie.  In fact, you should expect the complete opposite.  This movie delivered that in spades.  Torture, female nudity, torture while females are nude, even a 'golden shower' makes its way to the silver screen and now to DVD.  Well, at least a DVD from Korea, because that's the only copy I could get a hold on via E-Bay.
The movie opens with a respectful disclaimer about some of the basis for the torture simulated in the movie.  Truth is some of the scientific torture that is depicted in the film, including the centrifugal force room and the boiling water room, were done to test endurance for pilots and push the limits of the human body.  Even done with science in mind, it wasn't cool.
On a side note, the vivisections performed to unfortunate prisoners actually brought about a lot of the information we use today about musculature and other tissue below the skin, including illustrations.  Still, not cool.  But true story.
Wikipedia has an unofficial documentation of the experiments that occured.  You can read about it here if you dare.
And whatever you do, don't read Wikipedia's unoffical entry about Unit 731 in Japan and what they did here.
This opening sequence made it that much awkward to start the movie.
At any rate, this opening title sequence is accompanied by a voice over of an actual speech by Hitler himself, finishing with a rousing "Heil Hitler" from the audience he was speaking to.  I couldn't tell you what he was saying.  My Tex-Mex is bad enough.
But here's that disclaimer that opens the film, the foundation for the movie's plot. 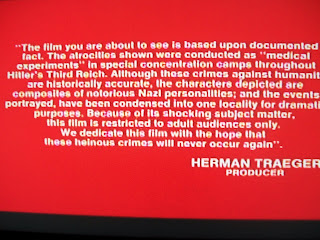 The movie wastes no time in having its title villain, Ilsa, banging it out with one of the male concentration camp prisoners.  Naturally, she takes control on top.  Classy start.
Unfortunately for her, the guy couldn't make it happen for her, so we get to see her cooling herself off in the shower.  Or getting herself off.  I'll leave that up to the viewer. 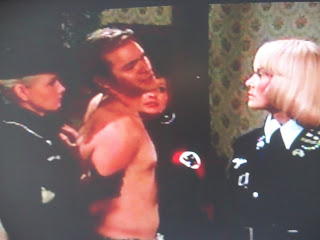 Like any man, he thinks he did well and will be granted some kind of pardon.  But Ilsa states her disappointment with his performance and has her blonde minions take him to the experiment room for some impromptu surgery.
Because he could not satisfy her, she makes sure she is the last woman he ever has sex with.  She promptly gives him the Bobbit treatment.
Yes, the Achilles Heel of our villain, the need for sexual satisfaction, is revealed early. 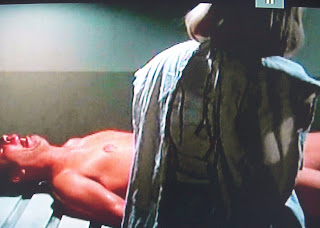 The camp Ilsa runs is a medical experiment camp.  They ship in dudes and girls to the camp.  And they enjoy humiliating them as they come into the camp. 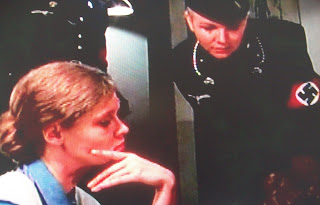 Ilsa likes to relax as well when she's not torturing dudes and chicks.  You will never see a nazi with more cleavage as she updates her superiors on her findings. 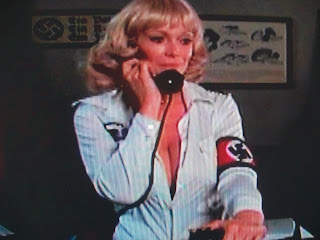 Guys are brought into the camp, and one stands out to Ilsa.  Guess who's in line for cosmetic surgery. 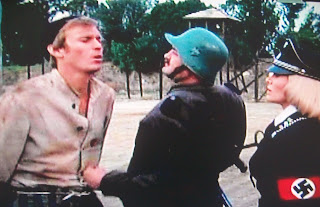 Fun Fact:  This camp was the actual camp used for the concentration camp comedy spoof from the 60's called "Hogan's Heroes".  When the producers of "Ilsa" said they would burn down the camp after they used it, the Hogan's Heroes people said it was fine so that way they wouldn't have to do the work.
Well, the girls in the camp get a preview of what will probably happen to them.  The most bitter of the inmates is this girl.  Once beautiful, now she's all ugly.  And, yes, a little upset at the whole thing. 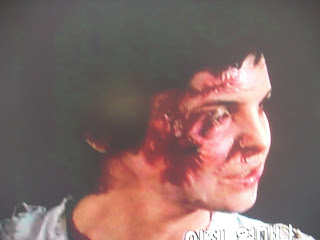 The next victim gets an idea what might await him from an Italian who got the Ilsa treatment.  As you might imagine, he's a little upset about that whole snipping thing as well. 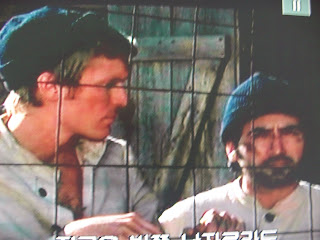 Ilsa, meanwhile, tries to find a woman who can take pain.  The way she searches for it is by having them torture each other.  She makes them whip each other with a leather strap. 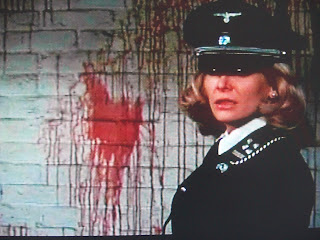 After a long day of torture, she picks up the blonde American who was talking trash when he got in.  It's his turn to ride the Tiger Tank.  The Italian dude doesn't hold out hope for him. 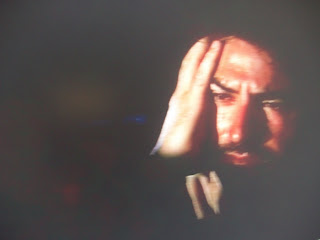 But as it turns out, our hero has a superpower.  He can control when he 'pops', so to speak.  So the blonde male prisoner ends up knocking the bottom out of Ilsa through the night, completely satisfying her insatiable sexual appetite.
The next day, Ilsa lines up the women to find finds one who can withstand pain.  She has a special device that will put all the women to the test.  The device, as you might imagine, is plugged into the wall and shoved up the victim's cooch.  Most of the girls can't handle it, until Anna arrives. 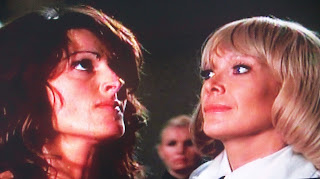 Wanting to check out her work, one of Ilsa's superiors shows up to take in her findings.  He kind of looks like the face from Wolfenstein.  Right? 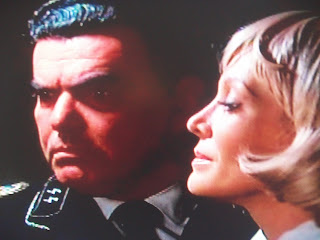 Meanwhile, our American hero hatches a plan to use his American superpower to disable Ilsa and help his real girlfriend and the others escape. 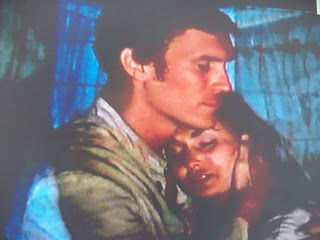 Ilsa and her crew throw a party for the visit of her superior, featuring food, wine, and a female prisoner hanging herself slowly as she stands on a big block of ice that slowly melts until she can't stand.
But when the guests leave, we find the superior likes watersports, and begs for a special shower from Ilsa. 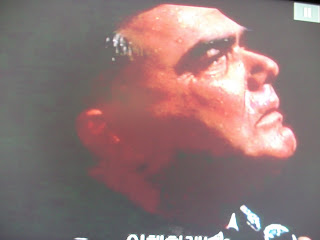 Ilsa reluctantly provides, but wants to be back with her American stud.
The superior leaves with his assistant, and Ilsa goes back to her stud. 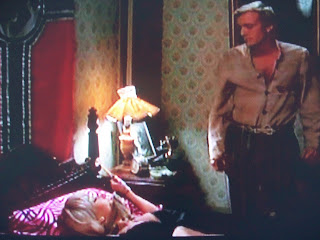 Because our hero is such a stud, she submits to his every demand.  Tonight, he wants to tie her up before he lays some American pipe.  But its all a trick.
What I found weird (in such a weird movie) was a picture of an old lady on the countertop next to the bed.  Now THAT'S creepy. 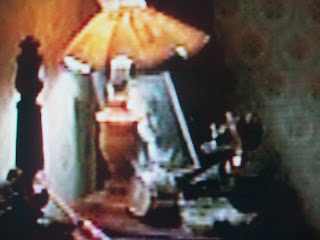 So, with Ilsa trapped, the prisoners make a break for it. 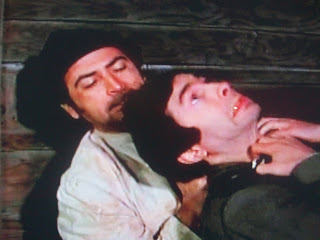 The prisoners start wrecking shop.  There's even a strange homage to noted director Sam Peckinpah with a slow-motion firefight. 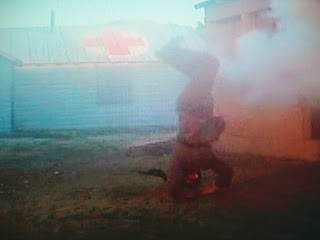 The prisoners, however, aren't interested in escaping.  They are interested in revenge.  Especially that bitter lady from the beginning of the movie. 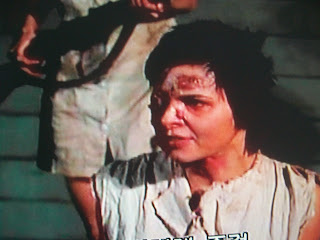 Our virile American hero tries to instill the value of freedom over vengeance in his friends.  But it's no use.  The tortued prisoners don't want to hear it. 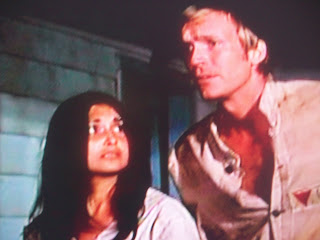 The American Hero tries to convince the Italian to leave with him.  But he says, and I quote, "There's nothing in that world for half a man." 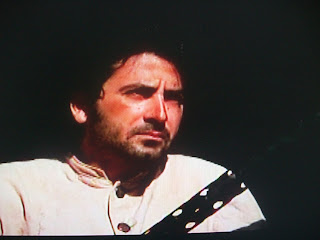 Clearly, he has not met 'The Imp" Tyrion Lannister from "Game of Thrones".
Anyway, during the fight, Ilsa finds a special suprise.  Tied up and completely vulnerable, Anna the tortured tough chick returns to extractr her vengeance. 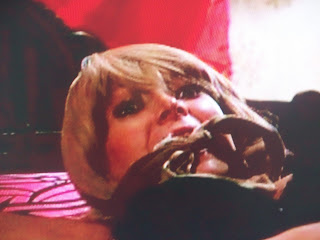 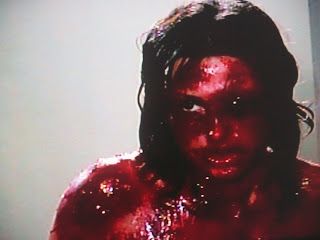 In the end, all of Ilsa's cronies are dragged out and executed by the bitter burned lady, gunned down with extreme predjudice.
But then, to their suprise, Ilsa's superior had sent his buddy that was also at the party back to camp to destroy it.  With the former leaders all dead, they exterminate the remaining prisoners. 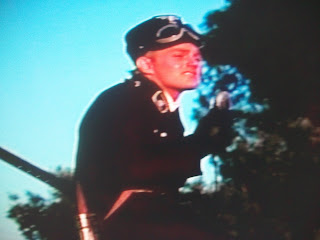 In the end, our American Hero and his girlfriend are the only one's who make it out. 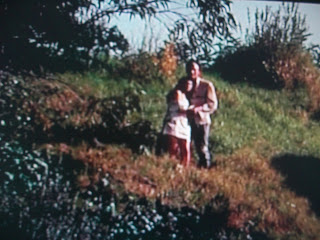 The credits roll to the sound of a children's choir singing some song in German ends the movie on a haunting note.

The Wikipedia entry for the movie has this commentary about the film.
'The over-the-top subject matter of Ilsa has turned the film into a cult movie.
Perhaps the best explanation for its notoriety is that it is a cinematic
version of the "men's adventure" subgenre of pulp magazine. Nazis
tormenting damsels in distress were perennial favourite subjects
for the lurid, sub-pornographic covers of sensationalistic "true adventure"
magazines such as Argosy in the 1950s and 1960s; the film seeks to
be a more explicit reversal of the same sort of sexual fantasy. Overlooking
the fact that no woman was ever commandant of a Nazi prison camp,
it capitalizes on the very real sadism and hypersexuality[citation needed]
of such predatory SS Aufseherinnen as Ilse Koch and
Irma Grese (see Female guards in Nazi concentration camps).'
The movie is entertaining in a trash cinema kind of way.  It's a different kind of reaction than traditional movies of horror and torture.  Lots of gratuitous sex, loads of violence, and a story that is both ridiculous and horrifying.
Though 'torture porn' was in vogue after 9-11 with such movies as "Hostel", "Devil's Rejects", and "Passion of the Christ", the same kind of deep emotional experience is felt with this film as well.  The difference is the context of the torture within the realm of WWII that makes it cringe-worthy in a very different and specific way.
Within modern torture movies, the same terror and revulsion is present, but there is still a kind of disconnect, a belief that something like that could never happen (even though it probably does on a daily basis).  But like the Wiki entry claimed, this movie uses the true facts of the torture as the basis for its terror.  And you can't help but feel it during the torture scenes.
If you're looking for a repulsive recreation of documented torture, a fan of trash cinema from the 70s, or both, then this classic forerunner of modern torture movies is a must see.
I watched it once.  Once will probably be enough for me.
==================
Bowie Ibarra is the author of the zombie horror series "Down the Road" from Permuted Press and Simon and Schuester.  You can find his books and network with Bowie at ZombieBloodFights.com.
This has been a ZombieBloodFights.com Production.
Posted by Bowie Ibarra at 5:32 PM