When I was young and impressionable, and pro-wrestling was completely different than it is in its current mainstream form, I was introduced to good old fashioned 'rasslin.  In Texas, I was lucky enough to enjoy the exploits of the von Erich family, the Freebirds, Ric Flair, The Road Warriors, and many others.

But there was one wrestler that was always spoken with a kind of reverence reserved for a world leader, or a religious figure:  Mil Mascaras.
I remember my cousin Albert telling me in a kind of hushed tone that Mil Mascaras was not only one of the best wrestlers in Mexico, but also the world.  This was in a time before I could dial it up on YouTube to see for myself, or a time before VHS tapes were affordable for tape trading.
But the legend stuck in my head.  And though I had never seen him wrestle, his legend would live on in my mind.
That was until that fateful night in Corpus Christi, Texas, Clash of Champions X on TBS, when Mil Mascaras would face a young Cactus Jack Manson.  Or as Gary Micheal Cappetta called him, "Captain Jack" Manson.
At any rate, I watched the match with great surprise and anticipation.  The styles didn't mesh, and when it was over, I was a little underwhelmed.  In spite of his legacy, I didn't think much of that particular showing.
Fast forward many years later.  1997.  It's the Royal Rumble.  It's San Antonio, Texas.  It's the AlamoDome, and I'm there live and in person.  Though the Rumble featured the rise of Steve Austin, it also featured several luchadores.  It seemed to be a response to the rise of the lucha style on US soil as provided by WCW.  And to my suprise, one of them was Mil Mascaras!
Mil rolled in like 'un casa en fuego' and started taking it to some of the competitors in the ring with his signature flying headbutt.  Some of those stars of yesteryear include the late Owen Hart, Steve Austin, and Hunter Hearst Helmsley.
The action would be short lived, however.  Since it was the Royal Rumble, any competitor that went over the top rope to the floor was eliminated.  Mil hit a great plancha from the top turnbuckle to fellow luchador Pierroth on the outside.  Thus eliminating him.
But, to my suprise, I saw him live and in person.
When I studied more about him, I learned he was the first luchador to fight in Madison Square Garden.  But more importantly, he preserved the sacred tradition of the mask by refusing to remove it for the fight with 'Superstar' Billy Graham as ordered by the New York Athletic Commission.  I imagine the McMahon family greased a few palms on the NYAC to make it happen.  And I'm glad they did.  That was historic not only for the WWE, but for lucha libre.
A few years later, Mick Foley would share in his book, "Have a Nice Day", that the match he had in Corpus was a disaster for him.  Allegedly, Mick shared the same complaint many had when wrestling Mil in that he was difficult to wrestle.  Friends of mine used to joke when we talked of Mil, using a line from Mick's book, "C'mon, Mil." 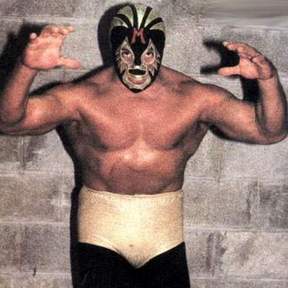 In spite of all the controversy surrounding his supposed primadonna airs, Mil was still a legend in my mind.  He was also ranked in Meltzer and Molinaro's book Top 100 Wrestlers of All Time.  He is credited with popularizing lucha libre in Japan, and is the grand patriarch of masked Japanese sensations Jushin Liger (who trained in Mexico), Great Sasuke, and Ultimo Dragon (who also spent time in Mexico), among others.
Like his contemporaries El Santo and Blue Demon, he even appeared in movies where he would wear slick clothes, drive fast cars, and fight crime, monsters, aliens, midgets, and anything else threatening his ancient country.
He has won 13 'Luchas de Apuestas', keeping his mask while taking the hair of 6 challengers and 7 masks.
In October 2011, a Japanese promotion sponsored a 40 Anniversary Lucha show in honor of Mil Mascaras. It was called Masked Nobility Fiesta 2011, and it featured a legends match with Mil, the original Tiger Mask, and the original Dos Caras vs. Tiger Mask IV, CIMA, and Ultimo Guerrero.  At the end of the show, even the crippled Japanese legend Hayabusa showed up to pay respect.
Before I share with you perhaps one of the best wrestling matches I've ever seen in my life, I would like to close this tribute with this final thought.
Growing up as a Texan with a hispanic background was tough sometimes.  Sure there was discriminatory douchebaggery on occasion, and it went both ways.  Douchebaggery begets douchebaggery.  Made you tougher.
But there was always a sense of pride seeing Mexicans and other Latinos doing well in sports.  Whether it was boxing or wrestling, it was a general rule that I would support the Hispanic competitor.  I'm sure I"m not the only one, and certainly McMahon, Sr. was big on that back in the day, with his ethnic heroes like Sammartino, Morales, and Johnson, among others.  There's easy money to be made appealing to the cultural background of a community, appealing to their hope for our own personal triumphs for our 'luchas' in life.
And that's the attitude I still hold.  Sure there will be competitors from other cultural backgrounds competing in sports I enjoy.  But it will always be the Mexican, Texan, or other Hispanic competitor that will get just a little extra support from me.  I know where I came from.  I can understand where they came from and can relate.  And the bond is formed.
That's why I want to see Sin Cara get better and return.  That's why I want to see Alberto Del Rio do the same.  They are the luchadors who have gone on to the big time, making big money, and sharing the tradition of lucha libre with the world.
Mil Mascaras might have been hard to wrestle against.  But lets face it, in the 'olden days' of 'rasslin',  if any wrestler didn't respect you in the ring, you would know it.  You would then have to earn that respect by following the values of the sport, honoring the secret traditions, and be able to hold your own in the ring.
The fact is, you didn't just wrestle Mil Mascaras and expect him to respect you right off the bat.  You had to earn it.  People might talk trash about him.  But did they try to earn his respect in the ring and out? 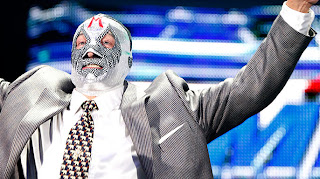 Now what's more of an example of the values of old-school wrestling than that?
Before we continue, here's the video package WWE put together for him for his 2012 Hall of Fame induction.

Respected WWE blogger Brandon Stroud had this to say about Mil Mascaras induction into the Hall of Fame:


"Mil Mascaras isn’t the greatest luchador of all time (he’s not as important as Santo or as good as Blue Demon … or Blue Panther, for that matter) but he’s certainly one of the coolest, at least when you’re little (he has SO MANY MASKS you guys), and he’s an awesome fit for the WWE Hall Of Fame. If you aren’t convinced — or are too swayed by Mick Foley’s writing — watch any old movie where luchadors fight robots (or vampires, or midgets, or whatever) and see Mil do that thing where he takes off a mask and puts on a different one in one little f**king wrist snap. Brodus Clay can’t smoothly take off breakaway pants with two hands and two assistants."
With that said, here is the link to the first part of one of Mil Mascaras greatest matches of his career against one of his biggest rivals.  As a commenter on the YouTube page said, "It's a Mexican and an American fighting in a Japanese ring."  Now that's awesome!

I especially want people who complain about the WWE product dominating the market today to watch it.  THIS is what real wrestling used to be about.  Science, and an all out fight to win.  The lengths Destroyer went to slap on the figure-four is great wrestling.  Does he finally get it?  Well, you'll have to watch the epic match to find out.

I also charge you to follow the links when the first quarter of the match is done and watch the whole match.

Mil Mascaras vs. The Destroyer

To Mil Mascaras, wherever you may be, gracias!

Comments?  Thoughts?  Agree?  Disagree?  I welcome any and all comments below using your Blogger or Google+ account.

Bowie Ibarra is the author of the 'Down the Road' zombie horror series.  His upcoming book, "Pit Fighters: Baptism by Fire", is a mixed martial arts themed book featuring a Mexican luchador named El Aire that competes in MMA.  Very much like Dos Caras, Jr (aka Alberto del Rio) did for a time as well.

You can network with Bowie and explore his library of Tex-Mexploitation stories at his website, ZombieBloodFights.com.
Posted by Bowie Ibarra at 10:34 PM