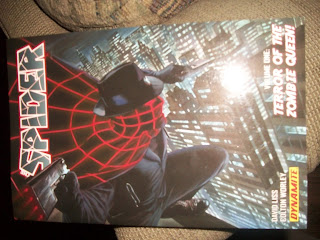 Dynamite Comics has been digging through the old relics of comic book/pulp fiction's past to bring some old properties to the new era.  With such big names as The Phantom, The Green Hornet, and The Shadow returning to shelves, its The Spider that comes across as a 'rip-off' of the Marvel title.  But that's far from the truth.  And thought I judged it at first glance, I decided to give the series a chance when I saw one of the first supervillains he was fighting was 'The Zombie Queen'.

Zombies, you say?  Count me in.

The character shares some similar costume designs as the Peter Parker 'Spider Man', but its really Spider-Man that borrows from this 1930s classic.  But the cape design and spider emblem is where the similarities end.

The gritty vigilante crime-fighter 'The Spider' is actually Richard Wentworth.  Like the original title, Wentworth is a modern war hero who returns to his hometown to fight crime as a 'freelance advisor' to the cops for the cities more 'bizarre crimes'.

Like all good superheroes, he's got allies.  Ram Singh is a lawyer who knows his secret identity, but is a valuable resource for his intelligence and fighting skill.  He's got a scientist on his team named Ezra Brownlee as well, who works at the university.

But even some of his friends run the line between ally and adversary.  The police commissioner, Stan Kirkpatrick, thinks Wentworth is The Spider but can't prove it.  There's also a love interest named Nita, yet more names straight from the classic stories, who is engaged to one of his friends.  The Spider knows it has to be that way to protect her.

At any rate, the first story arc for the series featured a madwoman named Anput, who uses an Egyptian villain gimmick with a male buddy of hers to attack the city with a poison gas.  The Spider suspects the gas might have been a project his rich father had bankrolled.  So its up to the spider to find the answers.

Noted author David Liss writes the stories, and Colton Worley provides an amazing palette of illustrations for the series.  The story is top notch, and has plenty of people affected (not infected) by the 'zombie gas' that The Spider has to decide if there's a cure for it.  Since its gas released and spread, thousands are affected before the stories end.

And how does it end, you ask?  You need to pick up the trade paperback and see for yourself.  The trade contains the full story arc and the beginning of a second arc that continues to build up the Spider Team as they face yet another villain threatening the city.

'The Spider' is a great tribute to its origins, and an outstanding series that should not be missed.  I was not disappointed in the least.  Great art, great story, great covers.  If the first story arc and art are any indication, 'The Spider' has some serious set of legs to take it into the future. 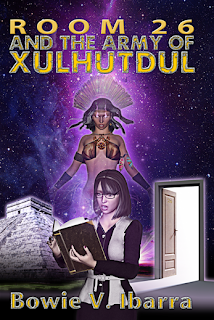 BOWIE V. IBARRA is the author of the 'Down the Road' zombie horror series from Permuted Press and Simon and Schuster.  His latest story, 'Room 26 and the Army of Xulhutdul' is the story of a young woman who is granted superpowers while being assigned to oversee a museum in San Antonio, Texas, that holds great secrets.  The book is now available in paperback and Kindle here.
Enjoy the blog?  Share it with your friends using the 'Facebook', 'Blogger' and 'Twitter' buttons below.

You can network with Bowie and read about his Tex-Mexploitation stories and check out his book trailers at his personal website, ZombieBloodFights.com.