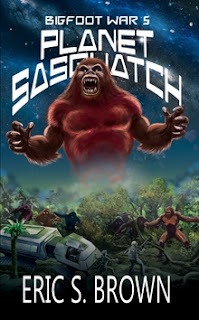 When you love something, you can never truly let it go.

And that's definitely what Eric S. Brown has done again with his greatest source of inspiration for unbridled mayhem. This time, he brings the fast-paced sci-fi action in Bigfoot War 5: Planet Sasquatch.

With his 'Bigfoot Wars' legacy, he has created a reputation for straight-to-the-point carnage. He sets up the dominoes and knocks them down with all the wild enthusiasm of a madman.

Planet Sasquatch is just like that. Quickly establishing the setting and the characters, the reader is then thrust into another wild battle between humans and Sasquatch as the humans encroach on their territory.

'Bigfoot War 5: Planet Sasquatch' continues in Eric S. Brown's tradition of gory mayhem and brutal battles between man and monster. Brown puts on display yet again his talent for putting together a fun story filled with action and brutality.

If you're a fan of Brown's work, this one will not let you down.

If you have not read one yet, this is a good stand-alone to get you started on Brown's body of 'Bigfoot' work.

And if you love wild action and adventure stories as well, pick up Bowie Ibarra's latest, Tejano Star and the Vengeance of Chaplain Skull in paperback or Kindle today.  It's a Tex-Mexploitation superhero story in the tradition of 'Machete' and 'Black Dynamite', that finds the hero looking to find the answers to stop a plague of the living dead from consuming south Texas. 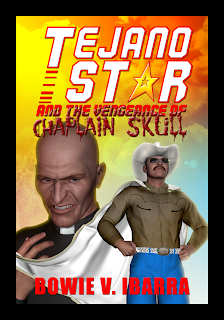 If you enjoyed this blog entry, then support Bowie by picking up this title or many of his others today in paperback or Kindle.

BOWIE V. IBARRA is a Texas author living in San Antonio.  He has a BFA in Acting and a MA in Theatre History.  Network with Bowie at his official website, ZombieBloodFights.com.
Posted by Bowie Ibarra at 7:10 PM