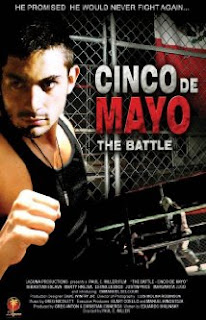 Every so often, you can find some little pieces of gold in the $5 DVD bin at Wal-Mart.  ZombieBloodFights.com found this little pit fighting-themed nugget some time back, and it was a fun and ridiculous little movie with a Latino empowerment theme.  Fun, ridiculous, Latino empowerment?  I'm all for it.
Here are reasons why you should check out this movie when you have a chance.
1.  THE STORY - The﻿ story itself is alright.  It's about a Latino kid who is smart and has ambitions in his life, including going to college.  He gets a scholarship, but loses it when he sticks up for a female student at school.
Needing money, he ends up learning the fighting art of lucha libre from an old lucha coach, and ends up fighting as the masked luchador, 'Tequila Power', a new force in underground money fights.  He eventually earns the right to fight the king of the southern California money fight scene, the Frenchamn Eiffel Tower, in the big finish.

2.  MEXICAN HISTORY AS A PLOT DEVICE - Everyone knows that Cinco de Mayo is a holiday that Mexican's the world over celebrate in honor of the Mexican victory over France at the Battle of Puebla  That's the battle where the ragtag Mexican Army led by General Zaragoza beat Napoleon the III's forces at the Battle of Puebla.

Not really.  Diez-y-seis is a bigger holiday in Mexico, and Cinco is really an American-style holiday that Mexican-American's use as an excuse to drink beer.  But it was cool to have this historic event used as the big angle for the final fight between Tequila Power (Mexico) vs. The Eiffel Tower (France) in the steel cage of an underground money fight.

Cinco de Mayo fight to show Mexicans can still give it all they've got, its symbolic, to show world what Latino's can be.

3.  NON-STEREOTYPED POTENTIAL FOR HISPANICS - It was cool to see Juan's grandmother want more from his grandson, outside of the stereotypical 'cholo' family seen in mainstream entertainment.  His mom died at childbirth, his father did 'underground money fights', and his grandmother made tamales to sell at the pulga, his grandmother did not want Juan to be 'just another Latino in America'.  She filled Juan with the motivation to put himself in a better place through education, an education he had to literally fight for.

Now if that's not a message every Latino or Hispanic needs to hear TODAY, TOMORROW, AND FOREVER.

After sticking up for an old man in a back alley, Juan discovers the dude he saved is a former lucha libre coach.  Don Benito takes Juan under his wing and instills pride and the history of lucha libre in him.

Yes, you heard that right.  He trains Juan to be a money fighter, takes him to his first money fight, and helps him discover what his mask will represent after telling him the history of lucha libre.
He said Mexican wrestlers were heroes to the Mexican people.  Then he goes off on the legends of the sport and what their masks represented:
- Blue Demon - Integrity
-Santo - Honor
- He said 'Tecnico' live by the tenants of honor, strength, integrity.  They become the person the mask represents.
- El Toro - perserverance.
- Do not be unmasked.  If you were, you were forever humbled to your foe.

When he had a mask custom made at the pulga, the Tequila Power mask, the maker said, 'Strike a bolt for Latinos everywhere.'  Andale!

5.  THE DIALOGUE - Because its ridiculous, but it still works.

Here's a favorite:
Juan - Is there a move to counter the tilt-a-whirl backbreaker?
Don Benito - Yes, but it is very dangerous.

Or this:
Girlfriend - Get him out of the ring, he's going to get killed.
Don Benito - No, no. He's following his heart.

6.  THE TRAINING OF DON BENITO

If this is how El Santo and Blue Demon trained, I'll be goddamned.  If you thought Nacho's training was ridiculous, here's Don Benito's training regimen.
-- Keep the Dog from biting you - Don Benito put a dog in the ring and told Tequila Power not to get bit by the dog.
Funny side story:  When I ever so briefly trained in pro-wrestling, it was in a ring in a wrestlers back yard.  While doing agility drills, the family dog jumped in the ring and bit one of my trainers.  True story.
-- Ford Fiesta move - Move a Ford Fiesta.  Yup.
-- Insult the Thug cook at a Taco Stand - Don Benito tells the Thug Cook that Juan won't pay and insulted his mother.  A wacky chase begins.
--  Lipstick Challenge at the Biker Bar - Don Benito takes Juan to a biker bar and challenges him to put a mark of lipstick on ten bikers.

The best part is when he eventually masters all these drills.  Classic.

7. SEX SCENE IN THE BOXING RING TO 80s STYLE MUSIC
Yeah, I kind of threw up a little in my mouth, too.
Nothing turns me on more than the idea of banging out the girl I love on the canvas of a ring laced with the accumulated slobber, sweat, and blood of any number of fights.  A true fantasy that is disgusting in reality.

8.  THE GHOST OF HIS GRANDMOTHER
Every fight movie cliché has the protagonist down and almost out when his final bit of inspiration gives him his second wind.  In this one, its the ghost of his mom, who appears to tell him she doesn't hate seeing him fight, he hates seeing him lose.  'You're a Mexican', she says, "And Mexican's don't give up."

9.   A LATINO WHO ENDS UP GOING TO COLLEGE AT THE END

All in all, you've got to find it and watch it.  The execution is alright, the performances are okay, but the story and the heart behind it are as good as gold.  Look for it in your Wal-Mart bargain bin today.

If money fights and Latino pride are your cup of tea, you'll love both 'Pit Fighters: Baptism by Fire' and 'Pit Fighters: Double Cross'.  Both are combat sports-themed books that features fights from the early days of MMA, and features a lucha libre superstar who crosses over into underground money fights.  You've got to check them out, and they're available on Kindle or paperback today.

Bowie earned a BFA in Acting and MA in Theatre History from Texas State University.  Network with Bowie for updates and news at his official website, ZombieBloodFights.com.
Posted by Bowie Ibarra at 8:33 PM