THE WILD AND WACKY EARLY DAYS OF MMA
By
Bowie V. Ibarra 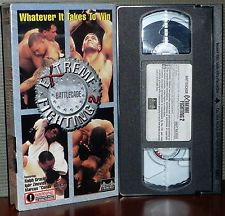 Mainstream MMA's come a long way since the days of the first UFC, where the Gracie family used slick marketing and sensational implications to bring their Gracie Jiu Jitsu system to the states and make those US dollars.  In fact, UFC led the way, but there were plenty of imitators that tried to get their hooks into that MMA market.  Extreme Fighting Battlecade was one of them.  The second event, like the first, was steeped in controversy and brutality.  Here's some of the fun things that went down.

That was an actual quote from John Peretti, the promoter for the event, after Orlando Weit asked if the ref would break stalemates in the ring.  Remember, this event was 'Extreme', and Peretti was probably working the camera, but he planted that seed in 90s viewer's heads that death could occur.

Since the first event was kicked out of New York due to the Athletic Commission forbidding the fights, it ended up in South Carolina.  This event was scheduled to take place on the Kahnahuake Mohawk Indian Reservation just outside of Montreal.  But as you might expect, after political pressure from the government, the event was threatened to be cancelled even though it was on the sovereign land of the Mohawk Indians.  The 'extreme' angle was played up by Don Zuckerman, who claimed the worst that could happen is 'The Army shows up and stops the fights', but there's history between the Canadian Army and the Mohawks.  The cable companies could end up not showing the event, either.

It was that kind of pressure that made Orlando Weit of UFC II fame and his wife cash out of the event on their honeymoon.

So, we're told by Peretti that the #1 Wing Chun guy is going to be part of the event.  I imagine with no governing body in Wing Chun or promotion, perhaps Steve Faulkner was #1.  When he took on Igor Zinoviev in his fight, it took Steve Faulkner :51 seconds to use his Wing Chun to tap out to a rear naked choke from Zinoviev.

Steve Nelson was booked as the #1 Sambo guy in the US.  Nelson used his tremendous Sambo skill to tap out within the first minute of his fight against Ralph Gracie.

When Royce became the face of UFC and MMA in the 90s, he was the true 'Brazillian Jiu-Jitsu' surfer dude, a true beach bum.  You could almost call him the slacker of the Gracie's, known for going by the Gracie gym to bum money off of his brother, Rorion.

That's when you see Ralph Gracie, who looks like somebody took a shit in his Wheaties and someone told him the dude across the ring did it.  When it comes to Gracie's with bad attitudes, Renzo has nothing on Ralph, who took his victory not with his vaunted Gracie Jiu-Jitsu, but with repeated strikes to the back of his opponents head within the first minute of the fight.

You go ahead Google these educational winners and have at it.

No Rounds!  No Judges!  It's EXTREEEEEME!

It also does nothing to help out when a match goes the full 15 minute time limit.  Jasan Canals vs. Nigel Scantleberry went the full 15 minutes.  And because we anticipated 'knockouts, submissions, or death' if Peretti is to be believed, we don't need no stinking judges.

Well, it turns out we did.  Canals and Scantleberry ended in a draw.

In the early days, there were some older dudes that competed in MMA events that kind of seemed out of place.  When you've got young, tattooed up dudes like John Lewis and Conan Silviera, Jim Teachout looked like someone's dad having a mid-life crisis.  He looked out of place in this promo video, and looked even more out of place when John Lewis finished him with elbows to the neck and spine.
John Lewis vs. Jim Teachout

--  ELBOWS AND PUNCHES TO THE BACK OF THE HEAD

Carlos Newton gave up 60 pounds when he competed for the first time at Extreme Fighting Battlecade 2.  He took on Jean Riviere in a pretty competitive fight that went over 8 minutes until Riviere used his weight to fold up Newton and suffocate him.

You just saw a dude like this back in the day who knew Jiu-Jitsu and you were like, man, this is totally not fair.  Well, Conan put that power and might as well as Jiu-Jitsu skills on display by using what I guess is jiu-jitsu punches to beat Carl Franks into submission in the first two minutes of the fight.

-- FIGHTERS GETTING HAULED OFF TO JAIL AFTER EVENTS

This tape ends with a closer to the opening segment, featuring the cops showing up and hauling off fighters to jail.  The charge:  Participating in an Illegal Prize fight.

It would seem natural that Igor Zinoviev, sitting in the back of a cop car, would be smiling as he is hauled off to get booked.  He smiles and gives a thumbs-up.  No sweat.

If you get a chance to find this title, its a pretty good indicator of the early days of MMA.  You can definitely see how far the sport has come since then.

And if you're a true fan of UFC and MMA, you'll love both 'Pit Fighters: Baptism by Fire' and 'Pit Fighters: Double Cross'.  Both are combat sports-themed books that features fights from the early days of MMA just like this event.  Like the early days, its 'Style vs. Style' in the pits of south Texas.  You've got to check them out, and they're available on Kindle or paperback today.

BOWIE V. IBARRA is the author of the 'Down the Road' zombie horror series from Permuted Press and Simon and Schuster.  His latest story, 'Tejano Star and the Vengeance of Chaplain Skull' is a Tex-Mexploitation superhero story in the tradition of 'Machete' and 'Black Dynamite'.  It's available in paperback and kindle today.

Bowie earned a BFA in Acting and MA in Theatre History from Texas State University.  Network with Bowie for updates and news at his official website, ZombieBloodFights.com.
Posted by Bowie Ibarra at 3:15 PM