When I think actual good wrestling, I don't think WWE.  I think NWA-Branded Outlaw Wrestling.  I think River City Wrestling.  I think NWA-Houston.  I think Ring of Honor.  I even think Anarchy Championship Wrestling, even though word on the street is the quality has gone in the shitter.  I'm lucky enough to live in a part of the country, south Texas to be specific, where quality pro-wrestling and quality pro-wrestlers still exist.  But I would never rank WWE anywhere near the emotion and fun I have at these events.

Not since 'War Games: '97, any Freebirds vs. von Erich's match, Rhythm and Blues jumping The Bushwhackers, Villano III vs. Atlantis (mask vs. mask), among others, but especially War Games '97 have I felt the kind of emotion that I did at tonight's Summer Slam 2013 PPV.  Here's some notes from the event. 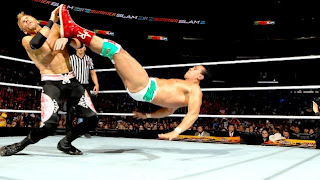 It's a simple formula.  Put two dudes who know how to wrestle in a match and let them go.  Raise the stakes by putting a title on the line, and you've got the formula for success.

The weird subtext of this angle is the whole 'white vs. Mexican' aspect of the fight.  Don't lie.  You can feel it coming from the crowd.  Even though Christian is a Canuk, there was this cultural aspect to the match that might have made me uncomfortable and cocky outside of south Texas, but had no problem celebrating with a crowd that was heavily on the side of Del Rio to begin with.

All that aside, the match itself was outstanding.  Great action, great wrestling, and great high-stakes intensity with the title on the line.  It was exactly what a title match should look like, not like the stupid, stupid, stupid, stupid, STUPID (did I say stupid?) STUPID non-title losses WWE puts on every goddamn week.  How stupid are you and your producers, WWE, to do that.

At least you made up for it here at this pay-per-view.  But with the final interview, it felt like you were stirring the pot of the culture war out country seems to be fighting against Mexicans and other immigrants.  It's as if you wanted to get the crowd to want Jack Swagger to show up and stand up to Del Rio.  Ya'll piss people off a the beginning of the match by making the ring announcer say his name in Spanish in the tradition of the 'foreign heel' archetype, then you expect people to cheer for him at the end of the match.

FUUUUUCK YOU, WWE, for perpetuating this culture war, you assholes.  But thanks, I guess I'll give you my $30 at the same time to wear that Del Rio shirt to piss every part of America outside of the US southwest off who doesn't understand Mexicans, Hispanics, and their participation in US culture. 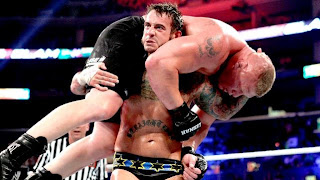 Yet another outstanding match that was great from top, middle, but not the bottom.  Like an idiot, Punk focuses his attention on Heyman and tries to lock him out (???) and forgets he's in a big fight against one of the biggest monsters to ever grace the UFC octagon or the WWE ring.

People were mad when I was shouting how stupid Punk was for doing that, but he was.  He deserved everything he got for ignoring his real opponent.

The IWC was already abuzz with its predictions at how it would play out: Bryan wins, Orton cashes in MIB.  So why are we so mad that it played out exactly like we predicted?

Because we knew that's how WWE would do it to provide a big FU to the IWC.

The match was outstanding.  HHH was a great ref.  Bryan and Cena brought the pain, and it was a great match.  Nothing shady, it seemed, even though I was suspect of HHH being buddy-buddy with Bryan at the end.  Asshole, I watched you jump Bryan out of nowhere in ATX at a Smackdown taping at the end of the year.  Now I don't know about you, but like Martin Riggs of 'Lethal Weapon' fame, I never forget an asshole, and I did not forget how I watched HHH jump Bryan out of nowhere at the end of his match against, ironically enough, Randy Orton at this taping.

So when Orton came out, and Bryan looked ready, I was ready for it to go down.  Think of it:  It should have been one of the times a Money in the Bank cash-in didn't result in a title change.

So, like many others, I'm already upset Orton would pull this MiB bullshit, so I want to see it go down.  But I know the history of that goddamn briefcase, and I know it has to go down.  Sure enough, there's Trips to fuck everything up.

For the record, Orton joins The Freebirds, Kevin Nash, and HHH as some of my most hated people in pro-wrestling.  I was ready to fight ever goddamn Orton or HHH fan in the bar tonight, that's how fired up I was.

But you know what?  That's what I pay for.  That's the kind of emotion I pay my hard-earned Ancira VW dollars to feel when I attend pro-wrestling events.  God, I was mad when Orton dared to step out and threaten Bryan.  I was even more upset when HHH double-crossed Bryan.

And what pieces of shit all Cena and Orton fans are for cheering for HHH jumping Bryan to allow Orton to steal his title.

I swear, I hate that MiB briefcase.

But here's what you can't get past:  1.  Bryan beat Cena clean.  Cena fans can never take that away from him.  2.  Orton had to jump Bryan like a pussy after HHH helped him.  Therefore, Orton is a pussy and HHH is openly a dick, so their fans are now pieces of shit and eternal enemies of me.

Can you see the kind of emotion this pay-per-view has pulled from me?  Not since War Games '97 have I felt this kind of anger and emotion.

And all I got to say is 'thank you, WWE'.  That's why I pay money to watch pro-wrestling.  It's cheaper than therapy.  And that's why I'm ready to pay money to see Bryan whip Orton's ass.

I just wish you did that more often instead of shitting out the same stupidity you do every week.

If you think I couldn't put together a better story, well I think I have.  If you enjoyed Summer Slam 2013, you'll love both 'Pit Fighters: Baptism by Fire' and 'Pit Fighters: Double Cross'.  Both are combat sports-themed books that features fights from the early days of MMA.  You've got to check them out, and they're available on Kindle or paperback today.

Bowie earned a BFA in Acting and MA in Theatre History from Texas State University.  Network with Bowie for updates and news at his official website, ZombieBloodFights.com.
Posted by Bowie Ibarra at 9:44 PM