BLOOD: Review - 'Only God Forgives' is an amazing cinematic work 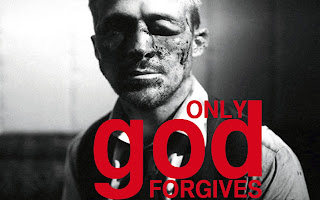 It has been a very long time since I've seen such an amazing, stylish piece of cinema gold.  'Only God Forgives' is an amazing crime film, and one of the best films of 2013.

The foundation of the whole movie is revenge.  The inciting incident takes place when Julian's (Gosling) reckless brother, Billy, goes out and kills a teen hooker after the money fights at his kickboxing club.  The club is bankrolled by Julian's drug-running family.

The cop assigned to the case, the cruel karaoke master Chang, allows the father of the dead hooker to kill her murderer, but punishes the father for letting his daughter fall into ill-repute.

When Gosling's domineering mother, Crystal (played by Kristin Scott Thomas), arrives in town to put things in order, the story accelerates from there.

The movie is stylish and precise.  Many moving camera shots are reminiscent of Stanley Kubrick's 'The Shining'.  There is not one frame or segment of film that does not take advantage of the foundation of visual arts in the use of balance, shape, line, light and dark, and color.  Every shot is a work of art.  The colors of the seedy Bangkok nights reminded me of the way Dario Argento used color and shape in 'Suspiria'.  Every single moment from the movie is sculpted like a portrait, a moving work of visual art.

The story is outstanding, sparsely laced with dialogue that is comparable to the works of Nobel Prize winning playwright Harold Pinter.  Like a good Pinter play, the story is told in the silences, the pauses, a lighting of a cigarette, an unanswered question, humiliation.  It is the height of powerful theatre.  Words are only used when needed, and when they are used, the actors take their time with a patient delivery, telling the story not through their words, but their actions.  It's telling at how amazing the director utilized subtle body language over actual words when I saw more depth in a cock-eyed 6-year old boy in the movie than I have in a majority of the movies I've seen this year.

The entire movie pulses with nightmarish images, unsettling sex and penetration imagery, cruel justice, incest overtones, character premonitions and foreshadowing, and a bizarre synth soundtrack that adds to the dream/nightmare element of the entire movie.

The blocking is so precise, its haunting, as if the characters themselves are ghosts, or phantasms from a dream.  It is part crime thriller, part violent horror movie, but all arthouse cinema masterpiece.

If you consider yourself a movie connoisseur of any kind, you need to make an effort to see this movie.  If you're not a fan of artsy-fartsy style films, this might not be a good choice for you.  It is one of the greatest movies I've seen this year, and is completely ZombieBloodFights.com approved.

BOWIE V. IBARRA is the author of the 'Down the Road' zombie horror series from Permuted Press and Simon and Schuster.  His latest book, 'Tejano Star and the Vengeance of Chaplain Skull' is a superhero story with a south Texas Tex-Mexploitation theme.  You can get it via paperback or Kindle here. 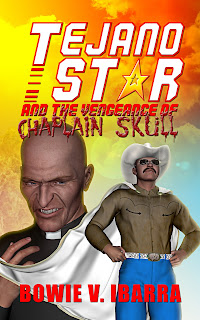 BOWIE V. IBARRA earned a BFA in Acting and an MA in Theatre History from Texas State University.  Network with Bowie at his official website, ZombieBloodFights.com.
Posted by Bowie Ibarra at 9:37 PM