BLOOD: Review - 'The Purge' had a great concept, poor execution 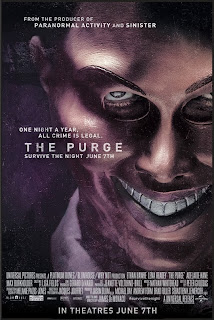 What started out as an amazingly golden scary concept ended as a solid brown turd.  'The Purge', another in what seems to be a trend in 'middle class/bourgeois' horror, started strong, then ended like a dud.  Here's the lowdown.

So, its 2022, and 'The New Founding Fathers' of the USA have found a way to let crime and evil human impulses 'purge' themselves by allowing all crime to be legal for 12 hours once a year.  All crime.  The opening was strong, featuring actual real-world cam footage stamped with 'Purge Day' and a certain year.  Even the set up was fine, as I was ready to buy into the concept.  Hell, hearing the radio shows talk it up with such reverence, you almost were ready to put together your shit list and give it a run.

Check it out.  The concept behind the US government-mandated purge was to let American citizens cleanse themselves of their inner demons.  The most vulnerable were homeless, poor, and anyone without the capacity to fortify their homesteads and defend themselves.  This allegedly produced 1% unemployment and an almost total eradication of crime on the other 364 days of the year.

Like leaving your light on during Halloween, people place purple flowers on their lawn to show their support of 'The Purge'.  And that's what Ethan Hawke's character, James Sandin, and his family did.  But he's making cash off the yearly event, like a Christmas profiteer, by creating so-called impenetrable home security systems for the event.  His wife, played by 'Game of Thrones''s and 'Dredd 3D's Lena Headey, tries to get along with the neighbors, who are playing catch up with the Sandin's.  James' security system has made the family a lot of money, and the neighborhood bought into it.  They're a little bitter about that.

The Sandin's have kids, too.  A teenage daughter who is experiencing those special feelings with an older boy who sneaks into the house daily to mug down with her.  They also have a young and tender hearted, yet strange, son who likes to use a little robot drone to look at his mom's legs and ass.  No sympathy for you here early, you little creep.

So the Purge goes down with all the reverence an American institution can muster, and things are fine at the locked-down Sandin house until a homeless dude, one of the recommended targets of all the people participating in the purge, shows up in the neighborhood asking for help.

That's when sympathetic little boy lets the dude into the house.  As the man is discovered by the family in the house, the daughter's boyfriend decides to make a move on her dad.  He had snuck into the house before it was locked down.

Well, Dad kills the boy, and the homeless man escapes somewhere in the somehow labyrinthine house.  That's when a group of strangely Republican-types show up with masks and demand the release of the homeless dude they were chasing to kill him.  They want him released, or they'll break down the house coming to get him.

That's when things get ridiculous.

So, I was ready to buy into this movie, but the inciting incident was ridiculous.  Okay, so number one, stupid boy lets the dude in.  Whatever.  Stupid move, and the kid deserved an ass-whipping.  My dad used to whip my ass for stupidity much less than that.  After that moment, which ultimately led to tragedy for the Sandin family, I wanted to see that kid purged or in the very least get his ass whipped by his dad.  Is this what middle America looks like?  Kids can get away with dumb shit, or in this case, putting an entire family's lives at risk with no consequence to the kid?

The other problem was why did the hunters decide they wanted to waste the entire 12 hour period hunting that one dude when there was a city full of dumb fucks they could have been killing?  Why was he so important than to waste Purge Christmas on him?  They're had to be easier targets.

It's like when you're playing tag, and a kid lands on 'base'.  You typically wouldn't wait there for them to get off base.  There were plenty of other people to tag.  Right?

And what kind of maze made up this house?  I get that it was big, and the lights were out, but jeez.  It was like you expected the minotaur to show up any minute.

There was a good twist near the finish, making me think the movie was going to finish strong.  But you still had a pretty good idea how everything was going to play out.  And sure enough, it did.  It was that predictable.  But the finish could have been a lot stronger, and the movie ended with a meh.

The film had a great concept, but the execution of it was poor.  I applaud the actors for doing what they could with the script, and they pulled out some truthful performances.  And the moment it looked like it was headed for a cool finish, you got nothing for it.

'The Purge' was just alright, and is not ZombieBloodFights.com approved.  Don't go see it in theatres, or pay for it on RedBox or use your freebies on it.  Only worth a look for the concept alone. 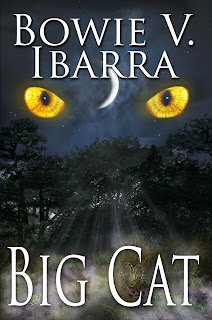 BOWIE V. IBARRA is the author of the 'Down the Road' zombie horror series from Permuted Press and Simon and Schuster.  He earned a BFA in Acting and an MA in Theatre History from Texas State University.  Network with Bowie at his official website, ZombieBloodFights.com.
Posted by Bowie Ibarra at 9:05 AM