by Bowie Ibarra
San Antonio has had a strong pro-wrestling scene for many years.  Many have come and gone, and only a few have sustained their organization through the years.  River City Wrestling is one of those that comes to mind, with monthly shows and features on local TV.  Wrestling fans in the city are truly privileged to have such great wrestling and choices available to them on a weekly and monthly basis.
A new wrestling outfit joins the San Antonio pro-wrestling scene.  They're called "Branded Outlaw Entertainment" and they put on a great show at Woodlawn Gym, a place where I once saw Great Muta, Tomoaki Homna, and Satoshi Kojima.
With a late arrival, I missed some of the fun from the opening matches, including a match featuring Rudy Russo that had a good buzz after it was over.  But I was still able to see some other great matchups.  But first, there was some big news.
'The Underground Icon' Scot Summers and his running buddy, Ryan Genesis, apparently crashed the party.  The 'best in Texas' had been in a public dispute with BOW bigwig, Ray Aikens, and the madman and his buddy were escorted out of the building by local law enforcement and security.  Much to everyone's surprise, it would not be the last time Summer's and friend would be heard from on this night.
SIX MAN TAG MATCH
MASADA/DELL/MARVEL vs. WEEZY WOO/JOJO BRAVO/VINCE VILE
On paper, this looked like a mismatch.  The trio of Masada/Dell/Marvel had a big power and brutality advantage over the young guns.  But the chink in the armor of the power trio was the battle of egos between Dell and Marvel.
I gotta hand it to Bravo.  He showed up with one eye to fight, as his other eye was bandaged up from a severe eye injury suffered almost a month ago.  The kids always had heart.

Masada had nothing to give Bravo but a series of elbows and other assorted strikes. 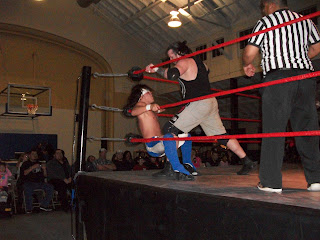 There was even a moment where you could sense the sadistic Masada just wanted to get at that eye, even taking a moment and stomping a prone Bravo on the wounded eye.
But interestingly enough, Vince Vile wanted to fight the dragon and made an open effort to taunt and yank the chain of the mad dog Masada.  Well, careful what you wish for, they say.  Vile got a taste of the fury of Masada, mixing it up with the sadist. 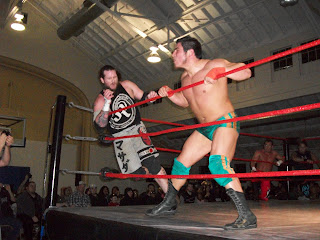 Vile tried to utilize science, switching to a go-behind on the scientifically-capable Masada. 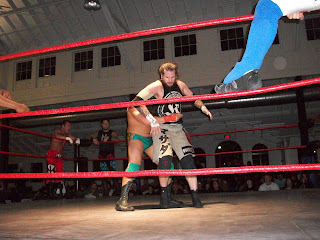 Dell takes out the troublesome Vile, and they tumble over the ropes. 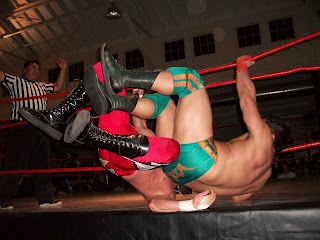 Masada punishes Bravo with a superplex, topped by a Dell-bow from the top rope. 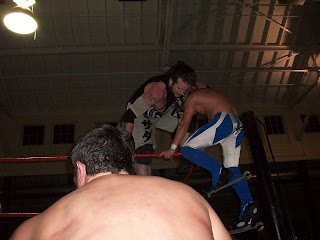 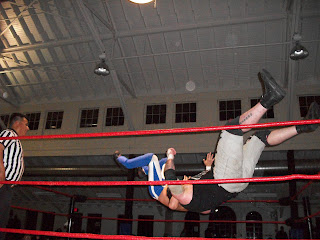 KEN CARSON (w/Barbie Hayden) vs. 'IRONMAN' ROB CONWAY
Ken Carson mixed it up with Rob Conway in a competitive match.  Carson was accompanied by his woman, Barbie Hayden.  I think Branded Outlaw needs to check with the Texas State Athletics commission to make sure she can legally be ringside, because her antics consistently put Conway in adverse positions. 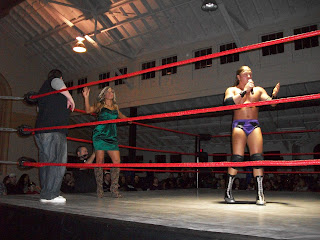 And since we're talking Barbie Hayden, it's time to bring back...
THE ZOMBIEBLOODFIGHTS.COM
FASHION CORNER
Barbie Hayden was wearing a silk emerald green dress.  Her hair was fashionably mussed, with a gold hair circlet that gave her that princess appearance she most certainly was going for.  She also wore a brown necklace with what appeared to be three brown stylish tiles.
But the real centerpiece provided a striking contrast to the rest of the ensemble:  Leopard print knee-high heeled boots.  Miss Barbie, you might be Ken's tramp, but you score high points for the choice of footwear. 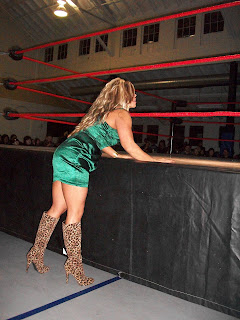 At any rate, in spite of her constant interference from the Texas tart, Conway takes the victory. 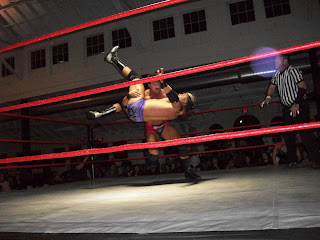 ANDY DALTON vs. SHOICHI FUNAKI
Andy Dalton is one of the best wrestlers on the Texas indy scene.  But he always seems to look like the guy that trains by the John Belushi method of eating 'Little Chocolate Donuts'.
I swear, I thought he was pregnant when he came out, having grown much fatter than when I last saw him.  I was afraid he was going to lose his baby.  He's moving toward Adrian Street/Adrian Adonis level of fat here.
But as per usual, the big man displayed his talent for pissing every single person in the arena off, bar none, by strutting his arrogant strut and talking trash to to the crowd.  Not to mention his in-ring skill. 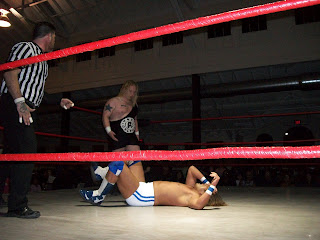 The match was going great, and Funaki had slapped on a figure-four leg lock on the fat man when Scot Summers and Ryan Genesis stormed the ring, assaulting a locked in and committed Funaki. 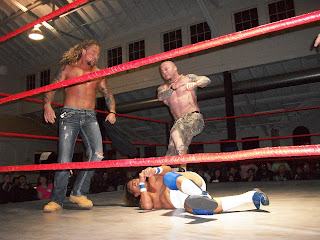 I have to say it was amazing to see an entire locker room united against these two monsters of the Texas indy scene.  Even guys like Marvel and Dell, two guys who were not making the best of friends earlier, united against the madman and his cohort.  They were once again escorted out of the arena by security and law-enforcement officials and a concerned Masada and Dell, who also joined the fray to run off the threat.
Incidentally, Masada and Dell were part of the group leaving the arena.  The four men have worked closely together for years.  Here's hoping Masada and Dell were able to make peace with them. 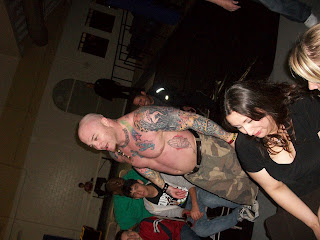 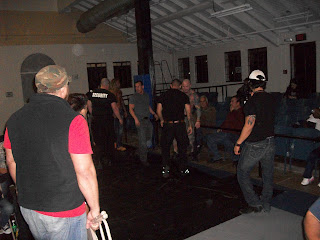 MAIN EVENT
THE RETURN OF LANCE HOYT
Lance Hoyt was welcomed back to San Antonio by the fans with open arms.  He'd been spending some time in Japan having a good run with some of the big names in Japanese wrestling.  Tonight, he took on the lumberjack Bobby Lambert in a brutal battle of big men.
In the end, Lance Hoyt came out on top, taking the victory. 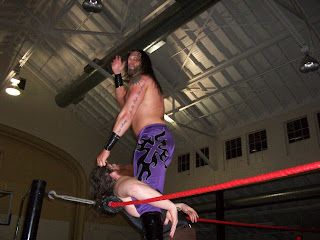 It was a great night of pro-wrestling.  San Antonio is very lucky to have yet another pro-wrestling organization committed to delivering quality pro-wrestling to the fans in the city.  I look forward to attending more shows in the near future.
================

=====
Bowie Ibarra is the author of the 'Down the Road' zombie horror series.  His upcoming combat sports books, "Pit Fighters: Baptism by Fire" and "Pit Fighters: Double Cross", are fightsport-inspired stories of action and adventure.
You can network with Bowie via Facebook, Twitter, and other social media platforms, as well as explore his writings at ZombieBloodFights.com.
Posted by Bowie Ibarra at 11:29 PM