FIGHTS - Welcome to the Awesome! Alamo Drafthouse has ruled for a while by Bowie Ibarra 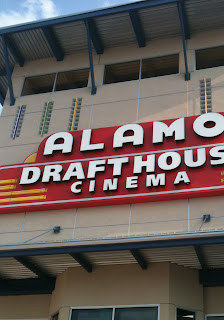 I want to take a moment and recognize how awesome it is to see the world is finally understanding just how awesome The Alamo Drafthouse Theatre is.

As you might know, Executives at the Drafthouse took a complaint message and turned it into a promo for the hardline stance they take against texters and talkers during movies.  Below is the promo:

It was put up for fun.  From the start, Alamo has always utilized fun promos to warn patrons to be considerate and not talk during movies.  Noted people who have cut promos for Alamo inlcude Alex Jones, Max Brooks, and the cops from "Reno 911".  It's awesome.

Even Anderson Cooper recognized how awesome they are, using the promo as a segment to his show.  He even put in the 'no talking' promos from Danny DeVito, Will Ferrel, and others.  Tim League, owner, even comments at the end:

Just so you know, Tim mean's what he says.  He's always been that way, and its great.  I remember going to the Original Alamo that used to be on Colorado when Tim showed up to intro special midnight screenings of cool movies.  He always had the same thing to say about cell phone use, emphatically stating his position to a rousing round of applause from movie goers.  Alamo Drafthouse has always been his baby, and he protects it as such.

I had a great time there, and have fond memories of the theatre, including sneaking in to see "Faster Pussycat!  Kill!  Kill!" with guest, director Russ Meyer, as well as SaviniFest, featuring four of Savini's greatest movies.  Savini even had an audience member "shot", setting them up with squibs.  (Please don't ban me, Tim!)  Also had a chance to meet George A. Romero at a Rolling Roadshow of RomeroFest.

Back in the day, Drafthouse had "Cannibal" themed shows with actual human flesh in the food, Blaxploitation nights with a 40oz Blue Bull with a ticket purchase.  It was the night I first saw "Black Belt Jones" and "Shaft".  And Weird Wednesday, which is still an institution at the new "Original" location on 6th Street Ritz in Austin.

Thank you Tim and Carrie League.  Thank you.
Posted by Bowie Ibarra at 6:50 PM