Because I was going to let 'The Walking Dead:  Say the Word' start on DVR so I could fast-forward through commercials, here is the first text from one of the resident weapons experts for ZBF.com:

And that's how I was lead into the episode. 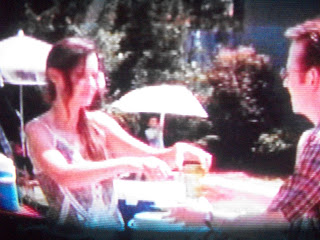 First off, was I the only one that thought the opening moments featuring the party in Woodbury featured the Ghost of Lori?  LOL!

Anyway, the scientist presents Andrea with a cup of cold water that the ghost of Lori handed to him.  She's impressed, but its using energy resources he could be using for his experiments.

Conspicuously absent from the morning activities is the Governor, who is combing the hair of a little girl who is sitting at his feet back in his house.  They are listening to an interpretation of Chopin's 'Etude No. 3 in E', known popularly as 'Tristesse'.  'Tristesse' is French for 'Sadness', similar to 'Triste' in Spanish, which means the same thing.  It's one of my most favorite classical pieces. 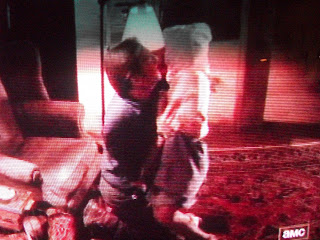 The trouble is, the girl is a zombie.  Since Governor Philip said his daughter had survived the initial zpoc, he meant he kept his dead daughter around to keep him company.  When she gets out of hand, he places a bag over her head and preps to lock her away, telling her, 'Daddy still loves you'.  But did Michone just watch what was happening down on the street below?

Moments later, the governor gets on his porch for another inspirational speech to the people of Woodbury, claiming it all started with 'nine people in an apartment', to where they were today.  Everyone holds up their glasses of iced water in honor of all those that came before, looking a bit like they are, indeed, 'drinking the kool-aid' of the Governor.

While all the stump-speech hubbub is going on, Michone sneaks into the Governor's house to get her Hanzo sword.  While she's there, she snoops around, seeing the pic of Philip's family, a strange book with a list of names ending in 'Penny' before a series of pages with hash marks.

But before Michone can investigate movement behind a door, the Governor, scientist, and Merle return.  The scientist wants to stop the Woodbury City Faire to finish an experiment he started.  But since it will take him 6-10 days, the Gov. shoots down the idea.  Before they leave, Michone has already ninja'd her way out of the house. 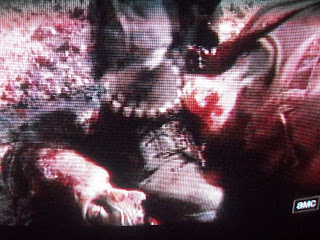 She shows up in the back of a warehouse where she finds captive ghouls.  She promptly releases and dispatches them with her Hanzo sword.  Thought we get some CGI action, the visceral Nicotero effects are on display with a head-stomp by Michone.  That's when some dude shows up to feed the zeds and drops his grub when he sees her.

I need to emphasize that again:  A dude shows up to feed the zeds.

Feed the zeds?  Feed them what? 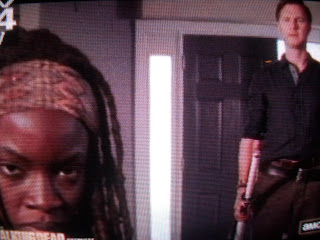 So Michone has to go to the principal's office.  She tries to get under the Governor's skin to get kicked out to no avail.  She even tries to bring up 'Penny', but the Governor keeps a poker face at the mention.  He won't let her leave for whatever reason, and tries to recruit her again to be a part of his Woodbury Death Squad.  But before he knows it, she uses her ninja skills to take the sword from his hands and almost kills him.  She spares him and walks out.

The Governor tries to get Andrea to talk Michone into staying to no avail.  She tells him she slaughterd some captured zeds, making Andrea wonder for a moment.  Andrea tries to make Michone stay, but its no use.  She is let out of Woodbury on her own, leaving Andrea behind.

Meanwhile, The Governor's death squad goes to a secret location that has a strange device that attracts zeds and makes them fall into a trap.  The squad, led by Merle, recover the zeds like lobsters in a trap, find worthy candidates, and start pulling their teeth. 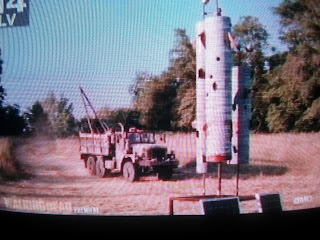 Night falls over the secured town (similar, but different than the secured town in 'Down the Road: On the Last Day'), and the Woodbury Jamboree culminates in one of the most glorious moments in ZDay TV History:

That's right!  The Governor has been providing the proverbial Roman 'Bread and Circus' for the people of Woodbury.  He gave them a day of food, iced beverages, and now the circus.

Here's how it plays out:  About six zeds are chained up in a circle, creating a fight space for the two competitors, Merle, and another dude with some pretty good hands.  Merle salutes Greg Nicotero's teacher, Tom Savini, with some one-armed push-ups before the fight begins.

Apparently, Merle took some kind of Tae-Kwon-Do class, because he hits his opponent with a spin kick before he responds with some kind of Capoeira/Eddie Gordo kick, and the two mix it up while trying to stay away from the chained (but toothless) zombies.

The whole event doesn't sit well with Andrea, who says the whole thing is sick.  But the governor says Woodbury 'needs entertainment' to 'make the people feel better about themselves'.  Then, echoing the philosophy of Roman gladiator battles for the ancient public, the Governor says it helps the people to 'not be afraid', very much like witnessing gladiator combat was supposed to desensitize the public to the brutality of war.

Bread and Circus in Woodbury during the zpoc, folks.  The more things change, the more they stay the same.

MEANWHILE, BACK AT THE PRISON....

Rick is still a mess as the WD Crew learns the baby is fine, but needs formula.  Daryle puts on his 'Man with No Name' poncho and takes Maggie on his Hog to find formula. 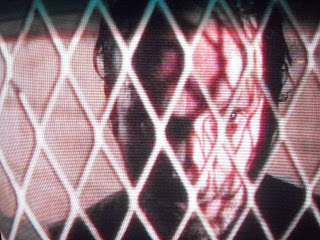 As that's going down, Rick snaps like a rubber band and goes on a (my fantasy) rampage through the prison.

Glenn occupies his time by digging a grave.  He lets the prisoners dig two others before going in to look for Rick.

When Glenn tries to talk Rick down, Rick assaults him and roams deeper into the prison.

Rick snaps like a rubber band as baby needs formula.  Daryl, Maggie, and Glenn make a formula run.  Glenn ends up digging three graves and lets the prisoners help as he goes off to find Rick.  When he finds Rick, he's in the zone and assaults Glenn.  It's clear to Glenn Rick isn't ready to leave, and he goes deeper into the prison. 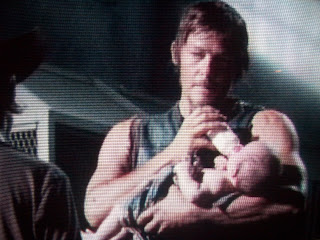 Daryl and Maggie returns to feed the baby. And while Carl rattles off the worst names in the world for the baby (read: the names of everyone from their WD crew who has died gruesome deaths.  Good job making everyone remember the gruesome fates of so many friends, little kid), the WD Black Angel Daryl bottle feeds the baby, and every one of 'Dixon's Vixens' in the world ovulates.

The next morning, Daryl leaves a 'Cherokee flower' for Carol's grave, though we have yet to see her remains and did not see her buried.

While the awkward moment of Carl bringing up the dead females of the group and Daryl feeding the bebe, Rick has found Lori's death bed.  The floor is bloody, and he finds the knife that cut her open.  But there is no sign of her.  It seems zeds dragged off her remains (?), and he finds the bullet Carl shot (?). 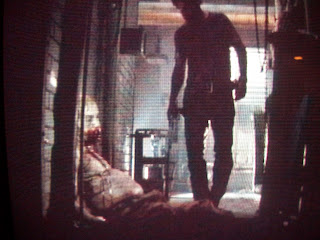 He also sees a zed fattened up from eating a lot of Lori.  Rick moves to the zed with the knife to cut him open.  After blasting its brain out by sticking his gun in its mouth and pulling the trigger, he moves to cut the zed open, but ends up stabbing it multiple times in its full belly.

After their tender moment, Rick takes a seat and spends the night in the room.  That's when the phone rings. 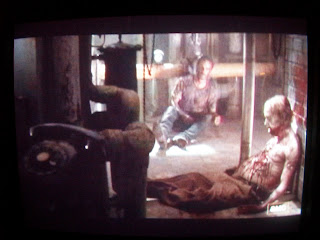 You can network with Bowie and read about his Tex-Mexploitation stories at his personal website, ZombieBloodFights.com.
Posted by Bowie Ibarra at 7:50 PM