FIGHTS: Hatton gave it all with loss to Senchenko 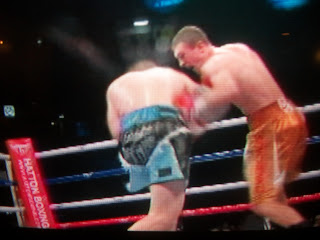 Ricky Hatton (48-3) gave it his all against a primed Vyacheslav Senchenko (33-1), but it wasn't enough to provide a triumphant return for the British brawler.

Hatton had fought some personal demons over the past few years since his devastating losses to two of the best fighters in the world in Mayweather and Pacquiao.  Pulling himself together, he got back into training as well as coaching to get his mojo back.

But it seems he set his goals super high against the recently defeated Ukranian, who lost his title to Paul Malignaggi, which handed him his first loss as well.  With Hatton hand-picking his opponent, many thought it was ambitious, as he clearly would have benefited from a tune-up match-up before jumping into the quality competition at welterweight.

The Manchester fans loved him, and he looked pretty good in the early rounds with relentless aggression and solid punches.

'The Ukraine Master' stayed in the game, though, in spite of being dazed and tested several times during the match.  And when the water started getting deep for Hatton in the later rounds, it was evident that Senchenko was more preapared than Hatton.  'The Hitman' showed signs of frustration, openly grumbling after missing shots.

But it was the cruelest of blows that leveled Hatton in the 9th, just minutes away from winning a fight he was taking on the cards.  A left hook to the kidney put Hatton away for good, dropping him to his knees in front of his adoring Manchester fans and his wife.

It was a tough loss for him, and a result of the immense amount of pressure he put on himself, saying he wanted his son and newborn daughter to be proud of him.

I just think he needs to put things in perspective here.  He beat drug and alcohol abuse.  He's got some bones to spend to help take care of his family.  He's got a career as a coach and trainer.  And he's got to remember his two losses before this one came against two of the best boxers of this day and age.

What is there to be ashamed of?

He really needed a tune-up before jumping in.  This bar he set for himself was super high.  Was it a realistic goal?  Sure.  He got to the 9th, so he was almost there.

But 'The Ukraine Master' has not had the kind of layoff Hatton has, so was much fresher.  That makes him just that much better to take Hatton in the home stretch.

I honestly pray he's not as hard on himself in this 2nd retirement.  I don't think he's got anything to be ashamed of.  If he's a good dad to his kids, they're going to love him no matter how many wins or losses he had in his career.

I get it.  Pride.  Pride is a sonovabitch.  But, Jesus Christ, I hope he puts things in perspective and is not so hard on himself in retirement.

If he wants to come out of retirement again and fight, I don't have a problem with it.  It seems like, even in defeat, his fans (who were still singing their song for him), would have no problem watching 'The Manchester Mexican' mix it up again.  He was fit and ready in what I saw (for being off for several years).  He's a warrior.  Boxing is just what he does, and deserves to do if his team thinks he's healthy enough to do it.

But if he does, I just hope he considers some more reasonable matchups before jumping into title contention, if there is a next time.

ZombieBloodFights.com would also like to offer condolences to the family and fans of Hector "Macho" Camacho.  A champion in the boxing ring, and a master of his sport, dead at 50.

BOWIE V. IBARRA is the author of the 'Down the Road' zombie horror series from Permuted Press and Simon and Schuester.  His combat sports themed book, Pit Fighters: Baptism by Fire , features a boxer from Scotland who transitions to mixed martial arts competition.