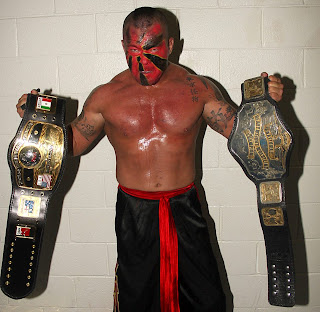 I have to admit it was a shady start to such a prestigious world professional wrestling title tournament.  As mentioned before, I'm not sure why the tourney was rushed and how entrants such as Biggie Biggs were worthy to have their names engraved alongside such legends as Dusty Rhodes, 'Wildfire' Tommy Rich, and Ric Flair.

But as it turned out, the shady start to this tournament ended even shadier as the NWA National Heavyweight Champion, Tokyo Monster Kahagas, who was one of many worthy NWA competitors passed over as a participant, was entered as a ringer for the final.

It's another example of how great (and shady-as-f**k) management can make or break a wrestler and lead them to gold.  In this case, it was Dontay Brown who finagled his charge, Kahagas, into the main event.

As reported by Tony Brooklyn, NWA Vice-President and CFO:


With only Wayne and Prophet remaining in the ring, Kahagas' manager Dontay Brown emerged with the reigning NWA™ National Heavyweight Champion. Brown was on the phone with NWA President R. Bruce Tharpe. Brown informed NWA™ Head Official Fred Richards that Tharpe had approved Kahagas' entry in to the match. Richards confirmed Brown's claim by speaking directly with Tharpe and allowed Kahagas' participation. Wayne then surprised Prophet with a quick pile driver and secured a three count. Shortly thereafter, Kahagas finished off Wayne with a "TMD" (Tokyo Monster Driver).
=== 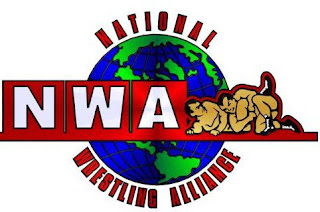 To be honest, I'm not sure why NWA President R. Bruce Tharp made this move to tarnish his own tournament.  This only adds to his questionable reputation, and I imagine Dontay Brown found some sort of legal looophole in how the event was organized, and probably greased Tharps palm for good measure to allow this ultimate travesty (eat your heart out, Chris Trew).  Hell, the legal eagle Tharp might have been in league with Brown and Kahagas in the first place, for all I know.
The way I see it, that's what the NWA gets for throwing this event together so fast.  Had they taken the time to organize as they should have, get their ducks in a row, and set things up correctly, Brown, Tharp, and ultimately, Kahagas, couldn't take advantage like they did.

But its over now, and Kahagas now has a target on his back.  Specifically from the two warriors who earned their shot at the title in the sanctioned tourney, Chance Prophet and Damien Wayne, who had some words for Kahagas.  Here's hoping Brown (and Tharp) are providing enough dough for Kahagas, because he'll be taking the lumps.

This brings up another question brought up by a fan:  If the old NWA rules apply, does Kahagas have to drop the national title now?  And if so, will there be another (hopefully better organized and legally protected) tournament for that title?

Though it was a shady start to a new era for the NWA, its a charged beginnig to what I anticipate to be an interesting run for Kahagas, whose name is now along side such greats as Harley Race, Bobo Brazil, and Sting.

Bowie V. Ibarra is the author of the 'Down the Road' zombie horror series from Permuted Press and Simon and Schuester.  His combat sports themed book, Pit Fighters: Baptism by Fire , features a lucha libre expert  who transitions to mixed martial arts competition.

You can network with Bowie and explore his other titles at his personal website, ZombieBloodFights.com.
Posted by Bowie Ibarra at 9:58 PM