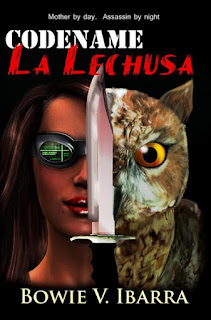 (From the opening chapter.  Story now available here in paperback and ebook for as low as $4.99.)

Her heart was strong.
The large and tested muscle was beating against her breasts like a large drum pounding through an ancient Central American jungle.  It was as if a stout and dark-tanned warrior struck that drum with the skill of an artisan, stoking the fires of bloody conflict in the souls of his fellow fighters.  The music resonated through their bodies, preparing them for battle, girding them for pain, grooming them for death.
The drum might as well have been in her chest as she looked out of the open hatch of the stealth plane, because it was doing the same for her.  The San Uvalde night was dark and cloudy.  The feminine moon hung full in the sky, gently illuminating the bed of clouds that shrouded San Uvalde in darkness.  The canopy of suspended condensation always gave her missions an extra edge, as if her fall through the moist aerial pillows would send her straight through to the ground.  That illogical fear made her heart beat stronger.  The jungle drum.
Breath was released from her body in steady, healthy rhythms, making her perfect breasts rise and fall like two round apples riding the waves of a washtub at a Halloween party.  They hid behind a sleek black and green experimental body suit, hugging her from her neck to her ankles.  A stylishly set peek-a-boo window exposed her cleavage.  Long black boots with green trim stretched from her toes to just above her knees.  State-of-the-art goggles held fast around her eyes.  Antennae for the internet-ready goggles stretched just behind her ears, allowing the brown hair of her Hispanic heritage to fall around it.  The antennae looked like ears.  Or horns.
The excitement of the moment aroused her, and that fact did not escape the grateful gaze of the cabin supervisor, the man that was going to tell her when to jump.
The people, especially the men, of San Uvalde knew her as Paula Belle Luna.  But she was known by the clandestine organization that assigned her to her missions by her code name: La Lechusa.
“Why do they call you La Lechusa?” asked the man.
“Well,” she said with little modesty, “I do some of my best work at night.  You don’t want to whistle at me.  And I can be pretty scary.”
“I’m not scared of you,” said the man with a sly smile.
“You should be,” she replied, matching his gaze with a dangerous wink.
On the screen of her goggles, an internet alert popped up:

You have a new What’sUp Message.

Get the rest of the story now!

"Codename: La Lechusa" can be found at Amazon.com in paperback and e-reader for as low as $3.99.  Get your copy and continue the adventure today here.

Network with Bowie at his official website ZombieBloodFights.com.
Posted by Bowie Ibarra at 7:36 PM