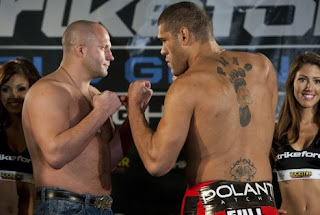 "Battle of the non-english speaking heavyweights"
In my opinion, Fedor got hosed at the StrikeForce show on Saturday night.  Going into the 3rd round, the doctor said the fight needed to be stopped.  Because Fedor's eye was swelling.  No blood.  Just swelling.
Silva was gassed, having tried to put Fedor away with no success.  He said his "skill and speed" beat Fedor, not his size.  That's garbage because three times, three times, Silva could have finished him with science.  But he couldn't get it done with the squirrely Fedor.  ﻿
Granted, the way Silva went about winning (top mount and flailing fists down on your opponent) is one of the many ways you can win.  But to allow the doctor to stop the fight during a prestigious heavyweight tourney and end a career of one of the top heavyweights in the world is garbage.

Fedor was hurt.  Silva was out of gas.  It was a fight.  They needed to finish it.

They were not allowed to.  Silva got off.

Don't get me wrong, I love MMA.  I picked up UFC II at the video store years ago and was hooked.  In fact, I love all combat sports, and respect the fighters immensely.

But to put things in perspective, I want to remind you of the Pacquiao/Cotto fight.  Cotto's eye was swelling, indeed.  Bloody, in fact.  He was asked if he wanted to stop the fight.  He said no, and had the chance to go back out, fight, and go out on his shield.  Which he did.

It's a shame Fedor didn't get a chance to do the same thing.

And with that fact, that is one of the reasons boxing will always be superior to MMA in my eyes.

Boxing and pro-wrestling.
Posted by Bowie Ibarra at 7:01 PM 2 comments:

BLOOD - ...or lack of it. Obscure Disney sci-fi relic "The Black Hole" 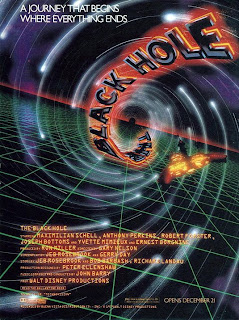 "This ain't 'Herbie Goes Bananas', friends. "
When I was a kid, the first two movies I was priviledged to be given (on the massive classic LaserDisc format﻿) was Raiders of the Lost Ark, The Norsemen, and Disney's obscure relic, "The Black Hole".  Initially, I thought the movie wouldn't be so bad.  It was a Disney film.  How scary could it be.  After revisiting the movie via the magic of NetFlix, I think it is the scariest movie I've ever seen, beating out the original "Texas Chainsaw Massacre."  Well done, Disney.
The movie starts with a unique convention: an overture.  It's a rousing march played on a black screen.  It was a peculiar opening.  The modern DVD version has text at the bottom identifying the black screen as the "Black Hole Overture".

During the original black screen, I thought, perhaps, something was wrong.  It was when it ended that the true theme song of the movie begins, setting the tone for the movie itself.  And, ironically enough, one of the most haunting pieces of music I have ever heard is in 3/4 scale:  A Waltz?  Look out, Strauss.

Check it out here:

The movie itself features top notch actors of the time, including Anthony Perkins, Maximillian Schell, and Ernest Borgnine, just to name a few.  Slim Pickens and Roddy McDowell even voice some of the robot characters.

Peep the movie trailer, and see if this is a Disney film to take the kids to:
http://www.youtube.com/watch?v=qzUJJKDa558&feature=watch_response_rev

So, as the movie progresses, the trauma begins.   *SPOILERS AHEAD*

The leader has this big bully robot called Maximillian.  He's a big red beast that is mute, but speaks with its size and a set of spinning blades that puts a cuisinart to shame. 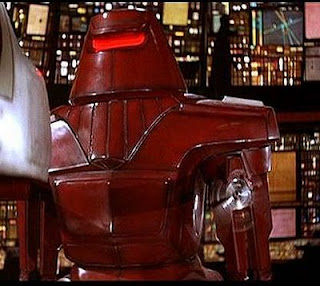 "It slices, it dices, it Juliennes"
So the ghostly drones of the ship turn out to be the former crew, transformed by Dr. Reinhardt.  When Anthony Perkin's character gets that news from Yvette Mimieux's character, he finds out for himself.  When he tries to leave, the big red machine decides for itself he's going to protect his boss' secret and attack Anthony Perkins' character with the blades.  The robot cuts through a leather book with Reinhardt's notes and cuts through Perkins.  The grisly death made me upset at Disney.  Never in a Disney film had I ever seen a guy die such a horrific death.  The face Perkins made was horrfic, and he was tossed into an electrical array.
There was no blood.  But there didn't need to be.  He was slaughtered, and my mind formed the rest of the picture.  Thanks again, Disney.
Then, the two robot buddies get ambushed by Maximillian, and the Slim Pickens robot sees his last battle.  There is a sweet farwell between the two robot buddies that is bizzarely poignent.﻿  But it works, and continues to set the tone for the doom that awaits the crew.
Check out the robot death scene:
http://www.youtube.com/watch?v=9bGOsQFMEbs&feature=related
So, before his untimely death by flat screen TV, the crazed Dr. Reinhardt initiates his plan to fly The Cygnus into the black hole.  But mishaps on the ship, a bizarre meteor storm, and other disasters cripple the ship.  The crew of the Palomino has to go to Reinhards scout ship because Ernest Borgnine tried to fly away in the Palomino and was blasted out of the sky by Reinhardt.
Oh, and check out the meteor that tumbles into one of the long tunnels of the Cygnus.  I miss the pre-CGI days.

"Eat your heart out, Bowling for Dollars"
So the crew tries to fly away, but the scout ship is programmed to follow The Cygnus, and into the black hole they go.
That's when the trip begins, an absolute abstract nightmare.
The crew on the scout ship have flashbacks as they spin down the hole, even the robot.  They hear voices as they are seen spinning in a kind of film nightmare.  Even the tough leader of the group has a breakdown, screaming in terror and holding his head as if he was going mad.
While the crew falls deeper and deeper into the void, it seems Reinhardt is dead, and he is pictured floating in this void.  He comes face to face with the audience, his hair all wild.  Then here comes the red beast.  Then Reinhardt becomes Maximillian, and they stand above a burning, fiery hellscape where lost souls walk.
Then a contrasting icy image is displayed above the hellscape, and what could be described as an angelic figure flies through.  The crew of friends arrive in a reverent light.  They somehow survived.
Then, we see a mysterious eclipse, and the scout ship flies toward it with a triumphant flourish from John Barry.
Here's the last five minutes of the movie.  Do not click on the link if you have dropped an acid or taken a hit off a blunt and are in a bad mood:
The Final Moments of "The Black Hole"
http://www.youtube.com/watch?v=BDj6XtZrxvw
So, by the end, I realized why it was all so scary.  For me, the real fear came from the thought that these people would never return to earth again.  They would never see their families, their friends, eat enchiladas.  Nothing.  And though the triumph seemed to be that they now had a new world to explore, that lost world that was their previous life was now over.  To me, that is horrifying.
At any rate, NetFlix it.  It's worth the watch.  The pacing is slow, but steady.  And its a great variation of the theme of the ghost ship floating in the ocean.  This one brings a ship in the ocean of space.  I recommend.
Posted by Bowie Ibarra at 6:07 PM 9 comments: