The nomination process for the First Annual ZBFbooks.com Award is complete.  And we have two great indy authors we can recognize as the first recipients of the ZBFbooks.com award. 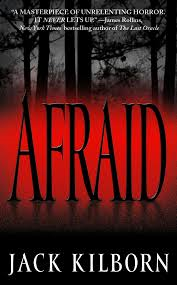 Our first nominee is a real heavy-hitter. His name is JACK KILBORN and the title specifically nominated was 'Afraid - A Novel of Terror'.  Jack Kilborn is actually the name JA Konrath uses when writing horror.  He has sold over 1 million ebooks, and has been lauded by writing luminaries such as James Rollins, F. Paul Wilson, and Jonathan Mayberry among many others.
Here's the back page of the specifically nominated book, grabbed from the Amazon.com page.
WELCOME TO SAFE HAVEN, POPULATION 907...

Nestled in the woods of Wisconsin, Safe Haven is miles from everything. With one road in and out, this is a town so peaceful it has never needed a full-time police force. Until now...

A helicopter has crashed on the outskirts of town and something terrible has been unleashed. A classified secret weapon programmed to kill anything that stands in its way. Now it's headed for the nearest lights to do what it does best. Isolate. Terrorize. Annihilate.

Soon all phone lines are dead and the road is blocked. Safe Haven's only chance for survival rests on the shoulders of an aging county sheriff. And as the body count rises, the sheriff realizes something even more terrifying - maybe death hasn't come to his little town by accident...

AFRAID by Jack Kilborn
Are you afraid of the dark? You will be.

The second nominee actually comes out of a publishing house very familiar to me:  Permuted Press.

KIRK ALLMOND started writing the first bestselling What Zombies Fear novel in 2010 as an online story as part of his website The Zombie Preparedness Initiative. When the idea to write a novel struck him, he took his own "Zombie Apocalypse" plan and turned it into a story. That story has now spawned six novels and two short stories, and is showing no sign of letting up.

In addition to books set in the What Zombies Fear 'universe', Kirk is also working on two other (non) zombie novels, and several short stories.

When he's not writing or talking about zombies, the Michigan born writer holds firmly to the southern roots of his family. He grew up in Chicago IL, and Roswell, GA. Kirk has an amazing little boy who was born in 2007, who is the basis for the character Max in his novels. His time growing up in the south with his grandparents taught him the value and skills to live off the land. He is an avid outdoorsman, loves hunting, fishing and backpacking. When he's not honing his survival skills, Allmond is often found sitting at a role-playing game table, either as the GM of his own Zombie Apocalypse role playing game or as a participant in games run by one of the members of Grown as Gamers, the premier podcast for all things geek and pop culture.
Like 'Afraid', 'What Zombies Fear' is a series.  Since no specific book in the series was suggested, we'll use the first book as the marker for Allmond's nomination.

Here's the lowdown on 'What Zombies Fear:  A Father's Quest' from the book's Amazon.com page.

"When Victor Tookes went to work that beautiful spring day, he never expected to see a man eaten alive in the street in front of his office. After convincing himself that they really were zombies, he makes a trip from his house in Pennsylvania to his family home in Virginia, battling zombies all the way. His three and a half year old son was bitten on the leg, but doesn't turn into a zombie. Instead, he turns into something more than human.

Victor quickly discovers that everything he knew about zombies was wrong. Not all of them were mindless, uncoordinated, rotting ghouls; some of them were bigger, faster, stronger or smarter than when they were human.

A small percentage of humans are genetically immune to the parasite. Instead of turning these humans into mindless shamblers, they gain enhanced abilities. These new abilities will be pushed to their limits in their quest to carve out a safe haven to call home.

How will he keep his son safe when the world crumbles around him?"

These are two amazing choices for the first ZBFbooks.com awards.  Who will win?  Well, that's up to you.

Come join the official ZBFbooks.com Facebook page HERE to cast your vote.  Only page members can vote on the 'voting' thread.  Simply join the page and cast your vote in the thread.

Come join the fun and recognize the author who best represents the spirit of ZBFbooks.com.