NOT TOTAL 'ROBOCRAP', BUT NOT AS MUCH FUN AS THE ORIGINAL
by
Bowie V. Ibarra 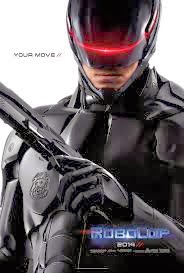 I don't know if its like this in your part of the world, but there's a grocery store here in south Texas called HEB.  Month after month, paycheck by paycheck, you can go to the store and find all the food you're looking for.  After months and months, even years, you know exactly where everything is at.

Then, for whatever reason, at that two or three year mark, someone decides they're going to change up the entire setup for the store.  Someone in management decided they needed to give some dude work and let some new guy change things up.  Things you once knew in one place are now in another.  Everything's there, but its all mixed up.  That bugs me.

That's kind of what I felt like when I saw the 'Robocop' remake.  Yes, it had elements from the first movie.  Yes it delivered some great action sequences.  But you moved everything around so much, you still bugged me.

In short, you get a similar storyline and payoff as the first movie with a little modern references to update the flick.  The main one being the use of US government-made drones to police the world.  That's the same technology by the same company that develops the updated Robocop.

The satirical commercials are replaced by a 'Bill O'Reilly'-esque political show that sings the praises of the global police state created by OmniCorp (once Omni Consumer Products in the old one).  It's hard to say anything bad about Sam L. Jackson as a right-wing neocon mouthpiece.  In fact, his supporting role was one of the bright spots in the movie for some laughs.

The movie, though, emphasizes the relationship between Murphy and his wife, which the original didn't touch on for very long, as well as with his child.  It's that relationship that propels the rising action and conflicts in the movie.

Micheal Keaton does a great job as the villainous Raymond Sellers, head of OmniCorp.  And the best performance from the flick that actually elevated the movie is from Gary Oldman, who plays Dr. Dennett Norton, who develops the human aspect of the robot technology. 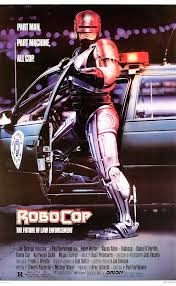 I can understand how they had to change the role of Lewis to a man.  Having a female partner would have been a distraction to the story Hollywood was trying to tell with Murphy's wife.  They're too dumb to pull off such a simple platonic relationship between folks in a film.  Micheal Williams did an okay job with the part.

But I think the big failure came from the casting of the lead.  Though Joel Kinnaman did alright as the lead, I couldn't get past the fact that he looked like Johnny Knoxville.

In the end, the movie was fine.  I was entertained, but let down.  Like Hollywood has been doing over the past decade or more, they take a great story and try to make it their own.  Like at HEB, they can't keep things the way they are.  With all the Hollywood cooks in the kitchen wanting to get their cut, things get changed to the point of almost becoming unrecognizable.

That's pretty much what happened with this movie.  It was enjoyable, yes.  Did I find what I came for.  Sure.  But I came in wanting to get a bag of beans and you put the shampoo section where my beans used to be.

What you need to do is check the sexy supernatural action/adventure story 'Codename: La Lechusa'.  It's the story of a strong-willed single mother who works as a secretary by day, but works as an assassin for a clandestine government organization by night.  It's available right now in paperback and kindle HERE.

Check out the trailer below:


BOWIE V. IBARRA is the author of the acclaimed 'Down the Road' zombie horror series from Permuted Press.  He earned a BFA in Acting and a MA in Theatre History from Texas State University.  His latest titles explore superhero themes, including 'Codename: La Lechusa', 'Room 26 and the Army of Xulhutdul', and 'Tejano Star and the Vengeance of Chaplain Skull'.
Network with Bowie at his official website, ZBFbooks.com, the leader in Tex-Mexploitation literature.
Posted by Bowie Ibarra at 1:08 PM