FIGHTS: Wrestlemania 28 turns out to be outstanding! 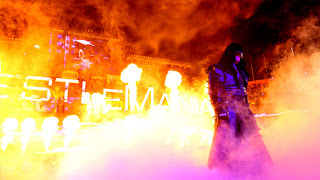 I have to admit, the lead up to the granddaddy of them all made me a little anxious.  With Royal Rumble being fun, but kind of silly, and Elimination Chamber more of E-Lame-ination Chamber, I was afraid that most of Wrestlemania was going to be more like Wrestle-Meh-nia.  But it wasn't.  All the matches were great, and I think WWE balanced the show with some great matches that provided emotional peaks and valleys.
I also had the privilege to enjoy the show with a former Texas independent wrestling star, Jeromy Sage.  Sage will be joining ZombieBloodFights.com today to provide some of his thoughts along with the ZBF.com impressions. 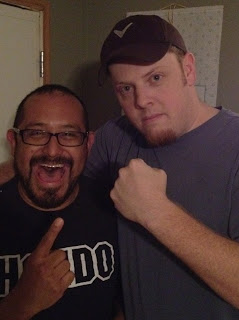 WORLD HEAVYWEIGHT TITLE MATCH
Daniel Bryan (c) vs. Sheamus
In our party betting pool, many people anticipated Daniel Bryan would open the show with a great opening title match.  But it didn't happen.  As the match was about to start, Bryan went to get a kiss of inspiration from  his valet and girlfriend, AJ.  When he finished the kiss and was turning to face his opponent, he was cold-cocked by Sheamus, who hit him with a cheap-shot Brouge Kick for the win.
Look, I get it.  Like the best in the world at cheap shots, Floyd Mayweather says, you gotta defend yourself at all times when you're in the ring.  But what kind of respect do you bring to the World Heavyweight Title when you win it with a cheap shot?  Sunday night, Sheamus spit in the face of George Hackenschmidt, Frank Gotch, Ed Lewis, Buddy Rodgers, Lou Thesz, Jack Briscoe, Tatsumi Fujinami, Harley Race, Dory Funk, Dusty Rhodes, Ric Flair, and 'Wildfire' Tommy Rich.
All I got to say is the way Sheamus won that title is a disgrace to the sacred scientific wrestling mastery that belt represents.  He should have been booed out of the stadium.
The Sage Perspective:  Once again, Vince with no respect for anyone he didn't create. Guess we'll see where this goes, but pretty disappointed not to get to see Bryan wrestle tonight.
Kane vs. Randy Orton
This match was pretty good to for one that seemed to be thrown together in the last few weeks.  Orton tried to use science against Kane, but was overpowered by the big man who eventually won with a chokeslam from the top rope.
The Sage Perspective:  No storyline here besides, "Oh crap, we forgot to put Orton on Mania.  Hey, Kane, you busy?"
Big Show vs. Cody Rhodes
I have to say it was great to see Big Show finally hold a respected and revered title, joining the ranks of Ricky  Steamboat, Ultimate Warrior, and The Honky Tonk Man.  From the moment his punch was ready, and to the point he hit it, I was anxious something would go wrong for him.  But it didn't.  When he clocked Rhodes, I knew it was over.  It was good to see him hold the title.
The Sage Perspective:  Show is rewarded for his willingness to always do what's needed. Great to see.
BETH PHOENIX & EVE TORRES VS. MARIA 'The Greek' MENOUNOS & KELLY KELLY
This match was much better than expected.  For the Divas, they all did pretty good.  That rolling attack from Kelly Kelly from the top rope was great.  And Maria Menounos having a difficult time getting to the top rope.
Also, the laughs came from the discoloration on her ultra-white pants.  It seemed to come right after she did the butt rub on the body of Eve Torres.  So it was either bronzer that rubbed off from Eve's face, or Menounos took a dump in her pants.  Either way, Menounos takes the pinfall victory over Beth Phoenix, and a little bit of the soul of pro-wrestling dies.
The Sage Perspective:  Meh, match didn't suck.
HELL IN A CELL END OF AN ERA MATCH
HHH vs. Undertaker
This match was outstanding.  The two dudes came out swinging for the fences, and it was clear this was going to get brutal.
A punch seemed to have opened up HHH early, and yes, that meant BLOOD!  Yes, there was actually blood in a Hell in a Cell match! 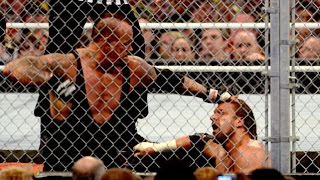 And there were also steel chairs.  They didn't whack each other over the head with it, but they pelted each other across the back in brutal fashion.  Taker quickly had bruises on his back from all the shots Hunter gave.
Shawn had a duty to stop the fight, but 'taker didn't.  HHH was going to be brutal to 'taker until the Dead Man quit, or Shawn stopped the fight.  HHH had even disabled Undertaker enough that at one point he was going to smash his head with the sledgehammer, but Shawn pulled it away at the last minute.
Then 'taker took the advantage, beating down HHH.  It went back and forth until 'taker finally dominated and HHH gave up, going out guns blazing with a crotch chop and a kamikaze attack on Undertaker that found him on the receiving end of a strike that culminated with a Tombstone piledriver finish.
The three competitors walked away as respectful athletes.
The Sage Perspective:  Really awesome.  Seems no one of the modern era is able to tell a storyl like this anymore. That comes from guys with little to no training brought to the big time very quickly. As the three walked out, I genuinely felt there was very little reason left for me to watch wrestling much longer.
TEAM TEDDY vs. TEAM LAURANITIS
We fast-forwarded through this match, but Team Lauranitis won when Zack Ryder got distracted by Eve and Miz took advantage.
The Sage Perspective:  I love Shiner Bock in a can.  Great idea Shiner.  This was also a great time for more pizza. Sorry we didn't have tabasco, Bowie.
WWE TITLE MATCH
CM PUNK (C) vs. CHRIS JERICHO
This was another great match, showcasing the great science of the two competitors.  Jericho suplexed CM Punk to the outside.  Not one of those clumsy suplexes where the two dudes end up falling, unable to execute the move, but a high vertical suplex to the arena floor.  It was brutal.
Jericho tried to get in the head of Punk, reminding him of his troubled family, but it only added fuel to Punk's fire.
After going back and forth with submissions and finishers, CM Punk eventally reapplied the Anaconda Vice and locked out Jericho for a successful defense of his title at 'mania.
The Sage Perspective:  Really fun to watch.  Maybe there are still some storytellers left.
MAIN EVENT
ROCK vs. JOHN CENA 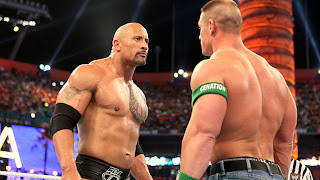 It was a year in the making.  Rock vs. John Cena.  They had talked a lot of trash over that year, and now they threw down in the middle of the arena filled with the proverbial 'excitement you could cut with a knife'.
The two exchanged moves, and you could see that Rock had a little ring rust as his moves were not as crisp as memory would recall.  But he still kept it competitive.
After going back and forth, Cena applied his STFU, and for some reason, Rock began to pass out.  Was it exhaustion?  Was it the pain of the stretched ligaments in the knee?  His neck wasn't getting cranked, either.  With the influence of MMA on pro-wrestling, I was afraid the ref was going to stop the fight.  But he didn't, opting instead for the traditional 'raise of the hand' to check for signs of life.
Hollywood must have taught Rock to be dramatic, because he began to pass out before recovering.
And before long, the end arrived.  After being clowned by Rock earlier, Cena thought he'd do the same.  Both these guys have been known to play too much when they're in the ring.  But though Rock was hoist on his own pitard earlier, it was Cena who would pay for playing around.  Cena was put down with the Rock Bottom for his efforts, giving the win to Rock.
The Sage Perspective:  Had very little interest in this match, but was pleasantly surprised.  Didn't see that finish coming. Guess Cena is turning heel after all.
Enjoyed the show overall. Good show, good food, good company.

It was a great night of wrestling, and I'm thankful it wasn't as lame as I thought it was going to be.  Great science, great action, great fun for all.
=============================
Bowie Ibarra is the author of the 'Down the Road' zombie horror series from Permuted Press and Simon and Schuster.  His latest upcoming book, "Pit Fighters: Baptism by Fire", is a combat-sports themed book featuring as one of the fighters a Mexican luchador who crosses over into MMA.  It will be available in paperback, Kindle, and other e-reader versions.
Enjoy the blog?  Use the 'Facebook', 'Blog', or 'Twitter' button below to share with your friends.
Please leave comments below with your thoughts.  I like hearing what others think.
Follow ZombieBloodFights.com on Twitter @wingback26
Join the official ZombieBloodFights.com Facebook group.
Subscribe to the official ZombieBloodFights.com YouTube page for book trailers and other mischief.
You can network with Bowie and learn about all of his Tex-Mexploitation books at his personal website, ZombieBloodFights.com.
Posted by Bowie Ibarra at 11:49 AM