After the art show, I bypassed the company party I was supposed to attend to go to the River City Wrestling show.  Their December 2010 show was entitled "The Event", and I had been looking forward to it for a month.
The house was packed as usual, and we were all ready for the show.  It opened with co-commissioner Jeromy Sage giving RCW owner Brandon Oliver an earful for kowtowing to the legal manipulation of co-commissioner Ray the Voice.  His frustration made him not only quit his job, but turn his back on the fans who had been supportive of him with his return.
The first match was between a big masked brute named "Muerte" vs. Boston import Gerard St. Christopher.  It was a good start that was followed by the arrival of Team XL, composed of Mr. B and Ryan Johnston.  They came out talking a lot of trash about how great they were until the Texas Hitmen put them in their place.
Chris "The Pride" Ariason took on Ben Galvan in the next match that ended with the peculiar arrival of Honkey Kong, led to the ring by the RCW Web Hostess Felicia.  He was fed bananas before going in to interfere with the match, leading the ref to stop the bout.
The next match was an out of control Four Corners Tag Team Tables Match.  It featured Ann Dromeda & Numero Dos vs. The Karate Kids: Jo Jo Bravo & Black Belt Jones (not Weazy Woo) with Darci Drake vs. Champions Southern Sex Appeal: Danny Matthews & Scott McKenzie vs. San Antonio's Most Unwanted: Spector & Nemesis with Major Mike, Chris Sifunetes & Pink.  These teams went at each other from the bell, hitting each other with strikes, chairs, and tables.  Pink even went through a table. 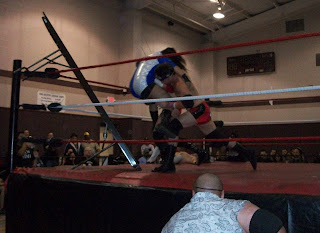 ﻿It ended with The Unwanted taking the titles with some skullduggery, but not before Joey "Super Spot" Spector shared a special moment with Ann Dromeda.
﻿ 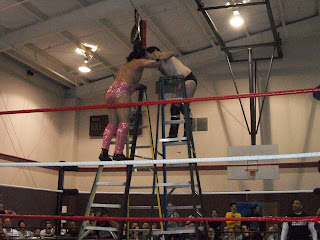 RCW had a raffle for Manager for a Match.  The winner was Tina Ibarra (no relation), who stood at ringside for Flash and Martinez.  The two top ranked females took it to took it to the flamboyant Andy Dalton and Rudy Russo, working more effectively as a team and coming away with the win.  Dalton even challenged Flash to a pose off, which Flash won. 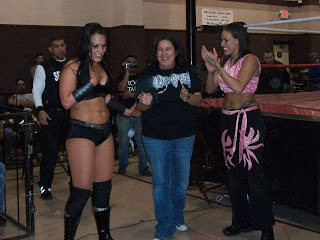 A bombshell was dropped on the arena when Jeromy Sage came out, declaring he was the advisor for the third person of the main event, that of Lance Hoyt. 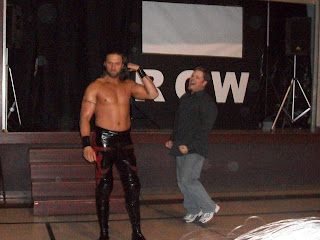 Much to the dismay of the "Mistake from the Lake" Ray Rowe. 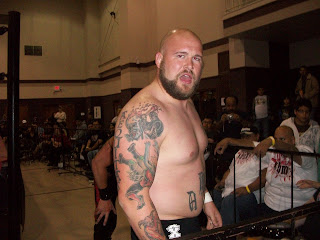 The two took it to Jax Dane for the vacant title 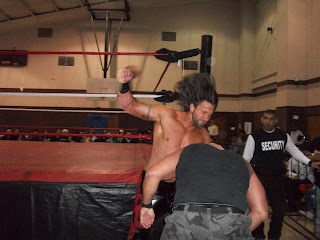 Rowe even got a DDT in on the exiled WWE star. 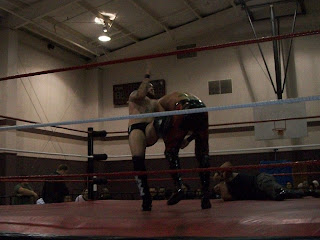 But in the end, Hoyt walked away with the victory, and became the new RCW champ. 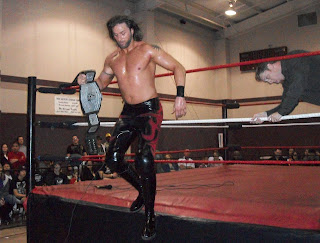 ﻿It was a great night of wrestling.  The crowd was fun, the Frito Pies were great, and RCW put on yet another excellent show for the fans.
To all the wrestlers I cheer and jeer, thank you.
Posted by Bowie Ibarra at 8:24 PM