ONE OF UFC'S GREATEST CHAMPS IS HOIST ON HIS OWN PITARD
by
Bowie V. Ibarra


One of UFC's greatest champions completely erased his dominant legacy by acting like a jackass longer than he should have, giving his challenger, Chris Weidman, a veritable taxi driver, the punchers chance he needed to catch Silva with an arm punch to take the title away from the most dominant UFC champ in history. 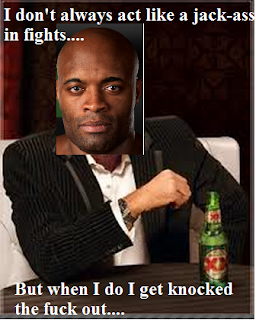 It was already a bad night for Brazilian fighters, with Charles Olivera and Roger Gracie losing to their opponents earlier.  They say bad things happen in three, so its appropriate that Anderson's match was next after these two fighters from Brazil had a mark added to their loss column.

Weidman took Anderson down early and though they ended up back on the feet, Silva was content to try and clown Weidman for the rest of the round.

My prediction was Anderson would turn it up in the 2nd round and put Weidman away, but it turned out he decided playing around in a world title match in his Burger King tights was much more appropriate for whatever reason.

And in a still-young combat sport where some schlemiel can have a handful of victories that somehow gets him booked in a main event fight.  That dude still has to ask his boss off of work changing tires at Goodyear to fight one of the greatest fighters in the world (read: Bret Rogers vs. Fedor Emelianenko).  And then, that schmuck, who hasn't even broken double-digits in the win column, can still has a punchers chance (6 ounce gloves) to beat one of the best ever (Anderson Silva was 33-4 at the time.  Weidman was 9-0).

That was pretty much on display tonight, and it was handed to Weidman on a silver platter by Silva.

Silva deserved to be utterly humiliated by his actions, lose the belt, and the respect of fans around the world.  I get the 'showboat' aspect of combat sports.  Floyd Mayweather, the biggest asshole in all of fight sports, has that as part of his game.  But he doesn't spend entire rounds doing that, begging his opponent to punch him in the mouth.  A moment or two, I get it.  But entire rounds?  WTF are you doing?

Real combat sport champs don't act like that:  Ali, Foreman, Matt Hughes, Randy Couture, Masa Funaki, Bas Rutten, Takanohana, Asashoryu, Jack Briscoe, Dory Funk, Harley Race.  By acting like a clown in the middle of the ring and getting his ass knocked out, he spit in the face of every former champ, the UFC brass, and the fans.  He asked for it, literally, and he got it in spades. 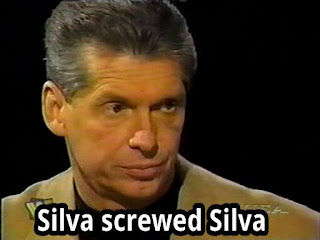 Word on the street is Dana is insisting that the rematch is Anderson's only option.  And it makes sense, too.  The loss cost the UFC superfight money by removing potential cash matchups against GSP and/or 'Bones' Jones in the future.

With that said, ZombieBloodFights.com salutes Chris Weidman for taking the fight seriously and wanting that title more than one of the most legendary champs in UFC history, who will now be remembered not as the most dominant champ in UFC history, but as a clown that pissed his legacy away by playing too much in one of the most high-stakes sports in the world.

BOWIE V. IBARRA is the author of the noted zombie horror series, 'Down the Road', from Permuted Press and Simon and Shuster.  'Pit Fighters: Baptism by Fire' and 'Pit Fighters: Double Cross' are combat sports-themed book that features fights from the early days of MMA, and plenty of underground money fights.  You've got to check them out, and they're available on Kindle or paperback today.

BOWIE V. IBARRA is the author of the 'Down the Road' zombie horror series from Permuted Press and Simon and Schuster.  His latest story, 'Tejano Star and the Vengeance of Chaplain Skull' is a Tex-Mexploitation superhero story in the tradition of 'Machete' and 'Black Dynamite'.  Get it in paperback or Kindle today.
Posted by Bowie Ibarra at 12:57 AM