Pretty good night of fights with Strikeforce.  After the opening with Frank Shamrock and Mauro "Dana White" Ranallo and that other announcer guy, it opened with a battle of fists. 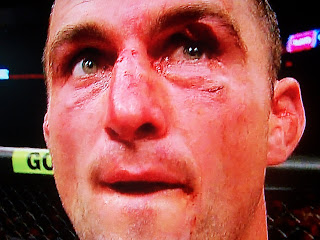 Would somebody please teach Scott Smith some head movement?
Don't get me wrong.  I respect the guy, like all fighters that step into the ring and put their bodies on the line for our beer-guzzling entertainment.  But it's getting harder and harder to watch his fights as he spends a majority of it getting punched about the face, waiting to get his patented "Hand of Steel" KO.  Seriously, he's a great fighter, but Saffiedine peppered his face with punches for the decision win.
I just don't want to see Scott as the poster boy for MMA concussions and be put out to pasture like Chuck Liddell and other MMA guys that have had too many KO concussions too frequently too early in their lives.
MMA safer than Boxing?  My ass.  Let's talk to Scott in another 10 years and test that theory.
Even better.  Let's just start recommending they study the head movement of boxing.
DALEY V. WOODLEY
Woodley did exactly what every opponent needs to do when fighting Daley:  Keep him on the ground.  Though Daley was able to escape when on the ground many times, he doesn't get any points for that.  Personally, I would have given Daley a +3 for his attempt at a LeBell lock escape, but I don't make the rules.  Lackluster on the feet, it was Woodley's work on the ground that got him the decision win over 'Semtex'.
"DANCING" ROBBIE LAWLOR V. TIM KENNEDY 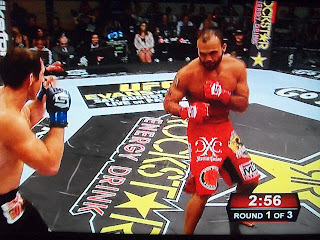 Who the hell is Robbie Lawlor's fight coach, Tommy Tune?  I know "Country Boy Can Survive" Matt Hughes isn't training that shit.  God knows his testosterone alone would repel a Bob Fosse-trained instructor from the gym.
But Robbie spent the first three minutes of the first round doing some kind of bizzare foxtrot ususally reserved to a Bugs Bunny cartoon, cutting a rug in the cage like a dancing queen as if he was auditioning for "Dancing with the Stars".
I expected Bruno to take Shamrock's place and provide a commentary. "Lil' Kim is alive and well and living in your pants, Robbie Lawlor"
It's too bad he wasted all that time in the first round, because he didn't do anything but get dominated with takedown attempts and takedowns by the rabid Army Ranger.  A broken nose couldn't stop Kennedy's assault.  And his heart and effort was greater.  Considering there were dudes outside the ring who had lost limbs in war, Robbie had to do a lot more than get a high score from guest judge Lil Kim to win this fight. 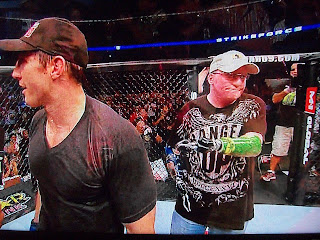 Let's face it.  Kennedy is not going to go back to his friend, Mr. Schlitz, who is missing both arms below the elbow and say, "Yeah.  Well, I broke my nose and I didn't think I could make it."
Talk about motivation.
WOMEN'S TITLE MATCH:  COENEN (C) V. TATE 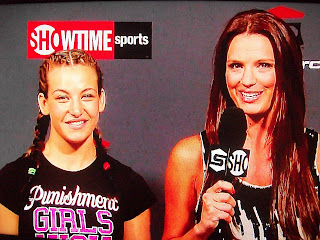 "Destroy.  Destroy.  Destroy."
Guys talking trash is whatever.  But when girls talk trash, especially using the verb "Destroy" more times in an interview than I've ever heard a girl actually use that verb, then SMILE after saying it, you know they are the meanest and deadliest human gender on the planet. 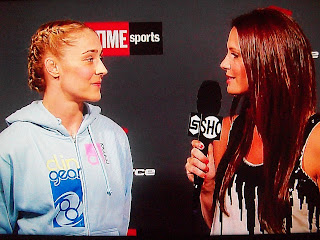 Even Marloes Coenen, in her Lord of the Rings style-elven blonde french braid, somehow looked sinister in her powder blue hoodie, smiling as she laughed off her imminent "destruction" at the hands of Tate. 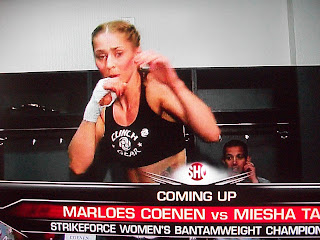 And, as per nature and the way guys are wired, as she warmed up with crisp and educated fists for the camera, a dude was talking on the phone behind her and checking her out. 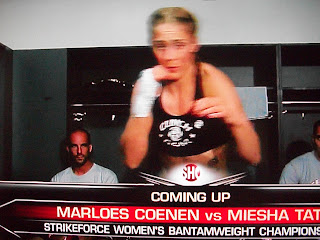 So was another dude.
We never learn.
In the end, the girls threw down in one of the best fights of the night.  And, as ususal, they both melted down in emotion restricted to female fighters for their respective title win and loss.
Okay.  Female fighters and Tito Ortiz. 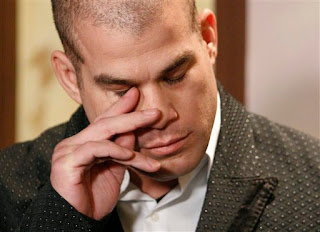 Okay.  That was a cheap shot.  Love you, Tito.  Shake the haters off like you always do.
FIGHT FOR RELEVANCE:  FEDOR VS. HENDERSON
The fight started fast, and can be illustrated effectively by the pics below. 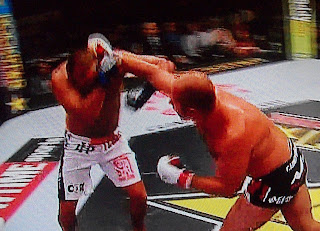 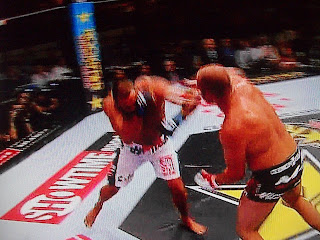 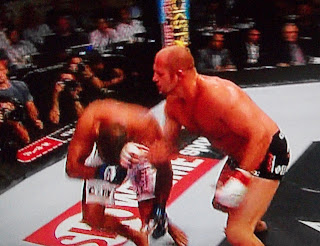 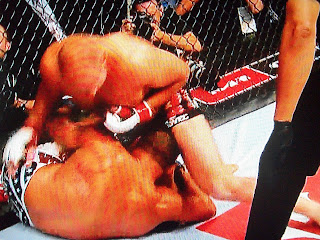 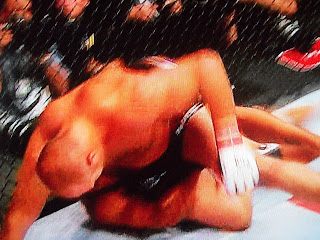 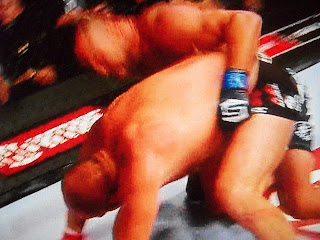 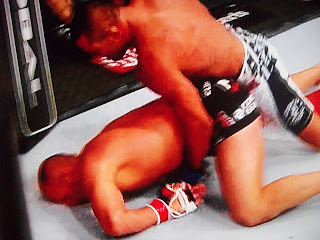 It was the same slick wrestling move I remember Anderson Silva using against Nate Marquardt in their title fight a few years back.  Pretty much the same outcome, too.  Hendo crushes the living MMA legend Fedor in the first round.
Good night of fights.  Thanks to all the fighters that mixed it up Saturday night.  Continued luck and health to all of you.
=========================
Bowie V. Ibarra is the author of the combat sports title "Pit Fighters: Baptism by Fire" and the upcoming "Pit Fighters: Double Cross".
Network with Bowie at ZombieBloodFights.com
This has been a ZombieBloodFights.com production.
Posted by Bowie Ibarra at 4:12 PM