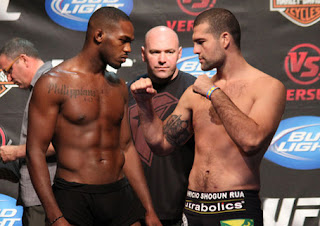 "Nothing personal, but I'm going to pwn you later."
"Bones" Jones is yet another exciting phenom that is taking the UFC by storm.  On the rise, he seems to be on the way to join the ranks of those non-traditional type of fighters like "Spider" Silva and GSP.  Saturday, he trashed Rua, a guy with a massive amount of experience and skill.  But Bones made him look stupid, early and often.  It was a great showing by what Rogan called "The Future of MMA".

Well, I wouldn't go that far.  I just think his unorthodox attack supplements his body shape.  He has long limbs like Nick Diaz which sets up attacks from weird angles.  And he throws people.  I like people that throw people.