FIGHTS: ZBFbooks.com welcomes the von Erich's of the new millenium 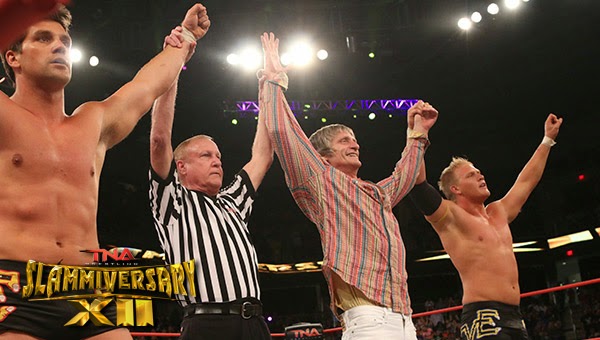 One notable bit of pro-wrestling news since ZBFbooks.com blog has been on hiatus is the arrival of Ross and Marshall von Erich at Slammiversary XII.  The son's of Texas wrestling legend Kevin von Erich, it was their first nationally televised appearance, and one of Kevin's rarest visits to the state where the helped build the reputation of Texas wrestling with his family: Daddy Fritz, and brothers David, Kerry, Mike, and Chris.

Big brother Ross and little brother Marshall are the future of the Von Erich family.  The brothers were trained by the legendary Harley Race and the NOAH Pro-Wrestling dojo in Japan, so they've got a legit foundation in the traditions of the past as well as current trends and styles.  Their wrestling pedigree is strong, and though they still look a little green, ZBFbooks.com hopes they continue to carry the torch not only for pro-wrestling, but for the high standards of Texas wrestling.

I'm also very thankful that these two guys are carrying the von Erich torch, as I was afraid Lacey (Kerry's daughter) was the last one to carry the tradition.

Fast forward to the 30min mark in the video below to watch their match with The Bromans.

BOWIE V. IBARRA is the author of the noted zombie horror series, 'Down the Road', from Permuted Press and Simon and Shuster.  His latest novel, 'Pit Fighters: Double Cross' is a combat sports themed book about the adventures of a MMA stable in south Texas, featuring a Mexican luchador who crosses over into MMA. 'Pit Fighters: Double Cross' is available in paperback and Kindle for as low as .99 cents.If you are a blogger and enjoyed the blog, please follow me.Enjoy the blog?  Share it with your friends using the 'Facebook', 'Blogger' and 'Twitter' buttons below.Leave a comment below using your Google+ or Blogger account.Follow Bowie on Twitter @wingback20 Follow Bowie's Facebook page.You can network with Bowie and read about his Tex-Mexploitation stories and check out his book trailers at his personal website, ZombieBloodFights.com.