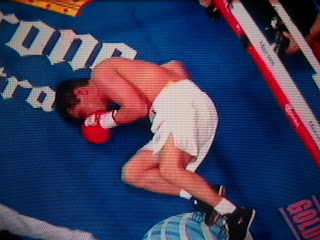 Morales seemed slow in spite of his natural warrior's determination.  He answered the youthful Garcia with punches, but it was not enough to get the victory.

This might be the last big payday for the vaunted Tijuana warrior Morales, who had a storied career, including a win against Manny Pacquiao and Marco Antonio Barrera, and several boxing title reigns.  He hopes to have one more match in TJ sometime in the near future.

Danny Garcia is in line for another great fight.  His home promotion of Golden Boy is grooming him for stardom, but he will need another victory against other members of his weight class, including Amir Khan and Lamont Peterson.  Zab Judah would be a good matchup to continue his rise.

Bowie V. Ibarra is the author of the 'Down the Road' zombie horror series from Permuted Press and Simon and Schuester.  His combat sports themed book,Pit Fighters: Baptism by Fire , features a Scottish boxer who transitions to mixed martial arts competition.

You can network with Bowie and explore his other titles at his personal website, ZombieBloodFights.com.
Posted by Bowie Ibarra at 10:36 PM