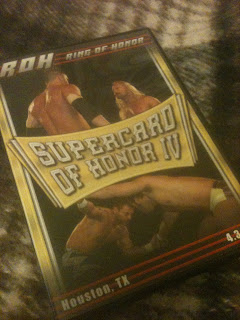 Ring of Honor is returning to Texas Saturday June 1st at the Shrine Auditorium in San Antonio, Texas.  South and central Texas wrestling fans have been looking forward to the event for months now.  This visit is not their first, however, as Ring of Honor staged two events.  One of those events was Supercard of Honor, put on Friday April 3, 2009 in Houston, Texas.  ZombieBloodFights.com was in attendance at that event.  Here's a recap of the fun that was had, via the Ring of Honor DVD. 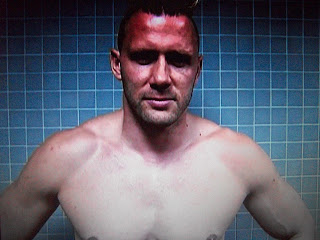 The DVD opens with a ROH World Champ Nigel McGuinness promo.  In it, he talks about how he's breaking down physically, but is ready to defend the title against Jerry Lynn.

We are then treated to a great opening matchup between Erick Stevens and Rhett Titus.  It was a great match that got the fans riled up early.  You have to remember, this was a bit of an international affair, as the crowd was chock full of people not only from Texas, but from around the world.  And all of them took pleasure in chanting to the sexually charged Titus, "You're a Virgin."

They put together a great match, and Stevens ended up beating Titus.  Naturally, the crowd was as rude as their ticket prices allowed, questioning Titus' manhood on the way out.  But he came back with the standard homophobic slur to the fans.  Good times.

This match was notable, as just moments into the match, the top rope broke.  The rest of the match was fought with no top rope, and they did a great job working through the bizarre event. 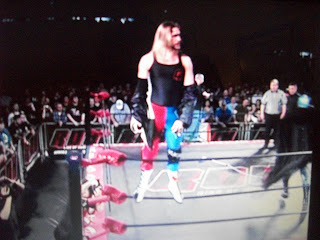 WHERE ARE THEY NOW?
==  Chris Hero is now Cassius Ohno in WWE.
==  Eddie Edwards returns to Texas will be competing at the second ROH show in SATX.
==  Incognito took Vince's check and became Sin Cara Negro before being unmasked by Sin Cara Azul and becoming the 'cholo' Hunico.
==  Jay Briscoe also returns to Texas as the Ring of Honor Champion to take on Roderick Strong for the title.

As per their styles, this bout was a hard hitting and intense bout.  During this match, you got the sense that the guys were wrestling on the show in the old fashioned tradition of trying to do even better than the last match that went before them.  It was an outstanding matchup which Strong won.

WHERE ARE THEY NOW?
==  Roderick Strong will be appearing in SATX and fighting Adam Cole for the TV Title

This wasn't much of a match, but it was great to see Kamala come out and spend a few minutes in the ring and get a check.  Dempsey made friends with Kamala by painting the same symbols on his fat body.  They ended up attacking Hagadorg. 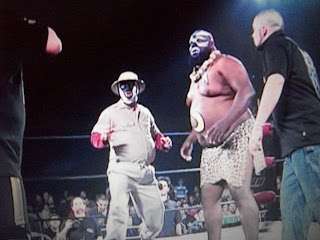 WHERE ARE THEY NOW?
== As per Wikipedia:  On November 7, 2011, Jim Harris had his leg amputated due to complications of high blood pressure and diabetes, forcing him to retire.  On March 27, 2012, Harris's son, Kamala Jr., stated in an interview that his father might also have his other leg amputated.  His right leg was amputated shortly afterwards and a campaign was launched seeking donations to cover his financial needs.

Alexander Koslov cut promo against Bryan Danielson before their match.  He did it all in Russian. 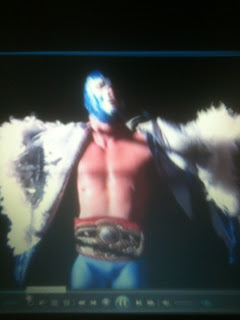 This was an outstanding match, not only for the talent, but personally for me.  It was the first time I had a chance to see a legend of lucha libre in the form of Blue Demon, Jr.  Not only that, but it was outstanding to see him wearing the '10 Pounds of Gold' of the NWA World Heavyweight Championship.
I remember this match so much for several reasons.  As a spectator from Germany was able to tell me how to say 'Go fuck yourself' in Swiss to Claudio.
I also remember finally getting to shout in Spanish at El Generico, as I thought his gimmick was mocking lucha libre.  Even after the event, I was still not sold on Generico until later.
This is also around the time that someone's remaining birthday cake made it around to my section.  I'll never forget how much community I felt that night. 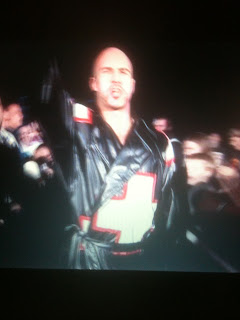 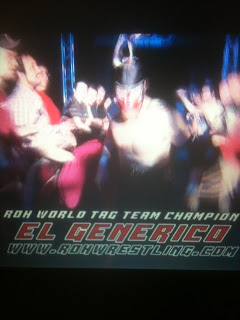 WHERE ARE THEY NOW?

==  Claudio Castagnoli has gone on to WWE and become Antonio Cesaro.
==  El Generico is in the WWE Florida territory without the mask and as Sami Zayn 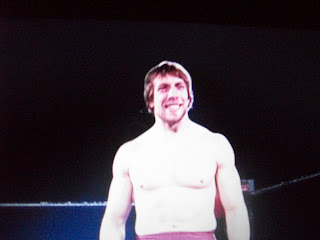 This was another outstanding fun and scientific matchup.  Having started his training under arguably the best wrestler to ever step in the ring, Shawn Micheals, Bryan had a kind of homecoming of sorts.  The two amused the crowd with their great wrestling and entertaining antics.

It was interesting to see Danielson walk around with a kind of swagger in the ring.  Though he remained humble, you could tell he enjoyed it.

This was also the first time I heard the chant, "You're going to get your fucking head kicked in."  That's still a chant I wish I heard to this day.  He also got a 'Best in the World' chant as well.

WHERE ARE THEY NOW?
==  Bryan Danielson went on to the WWE, and has held several titles, including the Big Gold Belt World Championship.

These two put together an outstanding match, featuring a tapout the ref did not see before D-Lo knocked Cabana out with a foreign object.

WHERE ARE THEY NOW?
==  Davey Richards returns to Texas to face Jay Briscoe for the ROH World Title.

This was a fun match as well, with both teams playing to the crowd and taking to the skies.  In the end, Aries pins Black via Brainbuster. 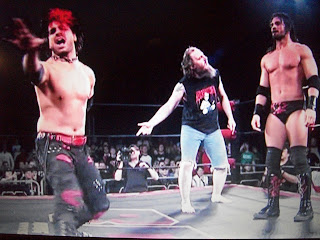 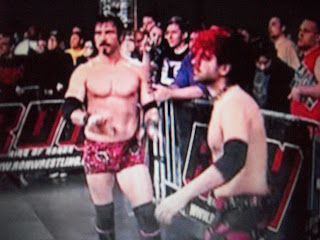 WHERE ARE THEY NOW?

==  Jimmy Jacobs has competed around Texas and has been a part of the current Texas indy wrestling revolution.  He returns to Texas as a member of SCUM.
==  Austin Aries has joined TNA Impact Wrestling and has held multiple titles there.
==  Tyler Black joined WWE and is one of the members of SHIELD.
"Age of the Fall" Jimmy Jacobs and Austin Aries vs. Tyler Black and Necro Butcher 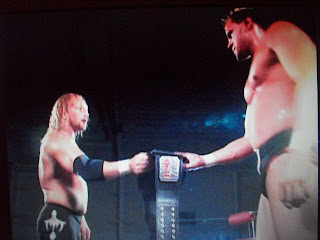 This title match was filled with emotion and energy from not only the wrestlers, but the crowd.  Everyone desperately wanted to see Jerry win, and they were not disappointed.  It was a great ROH Title match. 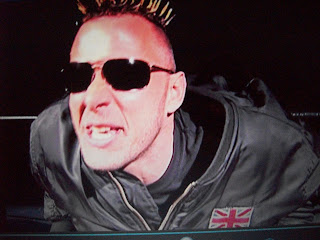 I think one of the best parts was when Nigel McGuinness got under the skin of those at ringside and said, words to the effect of, 'You bought your ticket.  You have a good time.'  Gold!

WHERE ARE THEY NOW?
==  Nigel had a short-lived run in TNA when he had to retire due to injuries.
==  Jerry Lynn has also retired as well after a nagging back injury finally won his match with Jerry.  He had a year-long farewell tour.
Both will be remembered as some of the best wrestlers to ever lace up their boots.

And now, ROH returns to San Antonio, Texas.  And though we aren't going to see what amounts to a Mayweather/Pacquiao dream matchup between the Kingz of the Underground against the Briscoes, ZombieBloodFights.com still welcomes them back, and still looks forward to the fun.

Get all the info, including tickets, here! 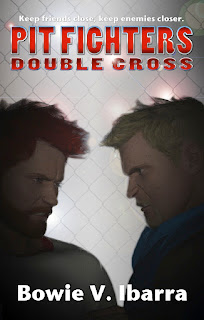 BOWIE V. IBARRA is the author of the noted zombie horror series, 'Down the Road', from Permuted Press and Simon and Shuster.  His latest novel, 'Pit Fighters: Double Cross' is a combat sports themed book about the adventures of a MMA stable in south Texas, featuring a Mexican luchador who crosses over into MMA.  'Pit Fighters: Double Cross' is available in paperback and Kindle for as low as .99 cents.

You can network with Bowie and read about his Tex-Mexploitation stories and check out his book trailers at his personal website, ZombieBloodFights.com.
Posted by Bowie Ibarra at 8:19 PM