ZBFbooks.com takes a look at some of the best shoots in pro-wrestling, as suggested by TopTenWrestling on YouTube.

This one was crazy.  MMA was on the verge of being mainstream, and Tough Enough was setting the standard for what would eventually become 'The Ultimate Fighter'.

Here's what happens when MMA and an Olympic Gold medalist collide in a WWE ring.

And check out this title from ZBFbooks.com, Pit Fighters: Baptism by Fire!Check out the trailer HERE about the fighters from across the globe descending on Texas to fight during the advent of MMA.Click on the book cover below to get a copy today via paperback or kindle. 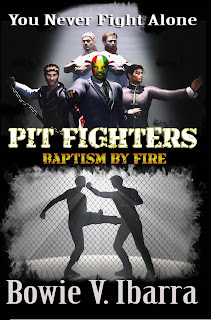 BOWIE V. IBARRA is the author of the 'Down the Road' zombie horror series from Permuted Press.  He's earned a BFA in Acting and a MA in Theatre History from Texas State University.  Network with Bowie and check out his books at his official website, ZBFbooks.com.
Posted by Bowie Ibarra at 7:58 PM