FIGHTS: It's time for UFC to consider protecting fighter's limbs 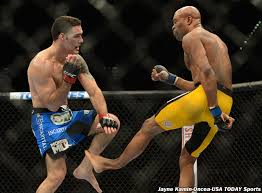 Can we have this conversation now?

You know, about protecting the limbs of fighters with resources that are already out there?  We're not reinventing the wheel here.  As we let these noble warriors beat each other senseless for the sport they love and we love watching, can we at least extend their livelihoods by protecting the things we can still protect?

There's never going to be anything that truly takes away from the brutality of combat sports.  But like 12 oz. boxing gloves protect the hands of boxers but doesn't take anything away from the damage they can do, perhaps its time for the Powers-That-Be in MMA to consider shin guards.  They are not uncommon in combat sports.  In fact, in organizations like Pancrase, they're required.  Like boxing gloves protect the knuckles of fighters (and, in turn, their livelihoods in the sport), lets bring in shin pads.

This tragedy with Anderson Silva's leg is not some kind of freak accident, either.  This happens a lot in kickboxing.  It happened before in UFC's The Ultimate Fighter with Corey Hill.  Simply look on YouTube for 'kickboxing broken legs'.  It happens a lot.  And MMA breaks show up in that search as well.

Do these folks bounce back?  Sure.  They can.  But why return when the same danger awaits?  And why lose all that time from your chosen career field with little to no insurance?

With that said, it might also be time to reconsider shoes as well.  From what I understand, there was some suggestion that shoes can be used to some advantage in a fight, which is why they are not allowed.  But they can also prevent broken toes as what occurred with another UFC Champ Jon 'Bones' Jones.

Now what happens to fighters brains is out of everyone's control.  Brain damage from concussions, from mild to severe, is a fact of combat sports now and forever.  Nothing short of stopping fighting will ever stop that.  But protecting the limbs and appendages of the fighters can and should happen.

That's money out of Dana's pocket.  That's fans cheated out of great fights in the future.

UFC, Unified Rules makers, anyone responsible for protecting fighters, lets get on this today, okay?

Think of your pocket books.  That's what you do anyway.

'Pit Fighters: Baptism by Fire' and 'Pit Fighters: Double Cross' are combat sports-themed book that features fights from the early days of MMA, and plenty of underground money fights.  You've got to check them out, and they're available on Kindle or paperback today.

BOWIE V. IBARRA is the author of the 'Down the Road' zombie horror series from Permuted Press and Simon and Schuster.  His latest story, 'Tejano Star and the Vengeance of Chaplain Skull' is a Tex-Mexploitation superhero story in the tradition of 'Machete' and 'Black Dynamite'.  Get it in paperback or Kindle today.
Posted by Bowie Ibarra at 12:26 PM