ZOMBIES: REVIEW World War Z plays out like an NWO fantasy (no spoilers) 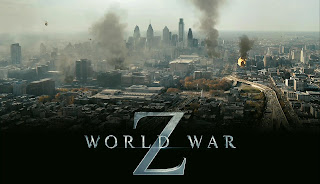 When I wrote Down the Road in 2005, a title which eventually earned a spot as one of the charter titles of Permuted Press, I didn't realize it would be part of the first zombie wave to hit the literary world.  I like to think that we're officially in the 2nd big wave, with 'The Walking Dead' bringing zombie horror to mainstream TV.

And with that mainstream attention comes the inevitable big budget big-name studio movies.  'World War Z', a movie based loosely on the sequel to one of the first wave zombie books, 'The Zombie Survival Guide' by Max Brooks, has hit the big screen.  With highly publicized troubles in production, its long awaited time on the movie circuit is here.  But did it cut the mustard?  One of my fellow zombie authors Timothy Long had some thoughts about its release here.  So did my fellow zombie enthusiast Eloise J. Knapp.  Texas author Rhiannon Frater, an author who just doesn't seem to like me, also got a chance to see a pre-screening.

At any rate, here's the ZombieBloodFights.com thoughts without spoilers.

The movie is the journey of the protagonist, Gerry Lane as played by Brad Pitt, who is assigned by the UN to find a solution to the problem.  He gets a front row seat to how the world is dealing with the crisis.

Without spoilers, the build-up was great, and so was the action that led up to it.  But the finish was just meh.  But considering Gerry's goal from the start, it was still the right finish.  I was still left underwhelmed, but at least it finished when it should have.  Not like Django.

Alex Jones put out several speculative pieces about the UN involvement in the film, martial law, and how it reflects aspects of the so-called New World Order's agenda for mass extermination.  Check it out here, and here.

Though the movie wasn't has heavy-handed as my fellow kook Jones' wild speculation about the film, and the UN did act as a global force making decisions for the world, including the US, the finish of the film was scary for different reasons.  It included imagery and suggestions promoting the mass extermination agenda of the shadowy and ambiguous 'globalists'.  Bulldozers scooping heaps and heaps of the dead in piles like garbage and setting them on fire were some of the more haunting images in my eyes. Those are the exact images my kooky friends say the globalists dream of, and I hated that the imagery is now being ingrained as a part of mass consciousness.

And though vaccines have been widely accepted as safe and non-toxic in spite of information suggesting the contrary, the production and distribution of the remedies across the globe was terrifying to me.  Witnessing children and the world happily accepting the vaxes and watching them be inoculated with the remedy/poison were just as scary, in my eyes.  Do you want to remain vulnerable to the 'zekes'?  Or would you rather poison yourself and fight against them?

But in the end, I was still left with the hope that, with the remedy, humanity had the capacity to still work together against a common enemy.  Unity through adversity.

Ironically enough, that has always been the key to humanity's success, and the main reason my fellow kooks say the 'globalists' keep us divided. 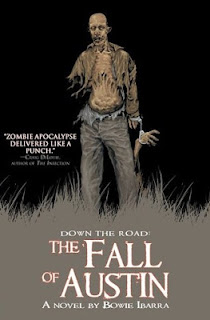 You can network with Bowie and read about his Tex-Mexploitation stories at his personal website, ZombieBloodFights.com.
Posted by Bowie Ibarra at 9:58 PM