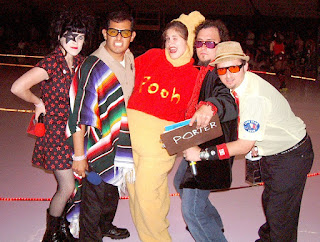 For the most part, the announce team has remained a constant.  Here is a brief biography of the people who have formally lent their voices to the Texas flat track revolution.

WHISKEY L’AMOUR – PLAY BY PLAY
Nicknames:  The First Lady of Flat Track Derby Annuncing
Sign: Aries
Memorable Quote:  “Whoopty Frikkin’ Doo, this is Roller Derby.
Gimmick:  A voice of many colors, Whiskey will forever be remembered for her outrageous costumes and bright smile.  Retired after the National Championship 2007.
Oh, yeah.  And her boobs.
Consecutive Three Time Announcer of the Year Award Winner.

LES McGEHEE – MASTER OF CEREMONIES
Nickname:  Motormouth
Gimmick:  An old school skating announcer complete with vintage suit and skates.  In his brief stint, will be remembered for his extremely witty remarks and ad-libbed praise of the Texas Rollergirls.  His “foreigners” bit is still used to this day.
Notable Recognition:  Master of improvisational comedy and author of “Plays Well with Others”, a veritable bible of improve comedy advice and sage words for living.

CHIP QUESO – CROWD WRANGLER
Sign: Leo
Nicknames:  The God of Gouda, The King of Chamobere, The Ayatollah of Gorgonzolla, Prince of Provolone, The Chedder Jackass, The Monterrery Jackoff, Cheiftan of Cheddar, Mozzerella Masterbater, Velociraptor.
Memorable Quotes:  (Something that resembles English screamed over the microphone.  Probably Gaelic.)
Gimmick:  Rarely referenced love of cheese.  Known for schmoozing with every rollergirl and league in his general vicinity or driving distance.  Never met a camera he didn’t like.  Also known for randomly joining group photos uninvited.
JIM “KOOL AID” JONES – MASTER OF CEREMONIES
Nicknames:  The Sinister Minister, “Flat Track Cult Leader”, “Bastard son of Dionysus”
Sign: Libra
Memorable Quotes:  “The couple that swats together… stays together”.
“The Hustler defense just fell apart like Chip Queso’s marriage”.
Gimmick:  A super-intelligent cult leader who calls matches with one of the sharpest eyes in derby.  He is easily the quickest wit in flat track today, second only to Motormouth.
Known for:  Forming the emo/folk/emo band “The Butt Butter Churners” and composing the signature standard “Queso’s Mom is a Fuckin’ Ho’”.  Proud supporter of “Find A Ref A Friend”.  www.findarefafriend.com
HOT WHEELS
Nickname:  Penalty Princess
Memorable Quote:  “Aw, shut up!”
Gimmick:  A devilish MILF with frightening dominatrix influenced outfits.
Known for:  Spending her final season whipping people’s asses while pregnant.

THE SCARLOT HARLOT
Nickname:  The Redhead with Bedhead
Gimmick:  Retired Hell Mary bad ass who filled in for Hot Wheels after her retirement.
Known for:  Short temper and big hits on the track, and a bright smile, amicability, and sense of humor off the track.